Share All sharing options for: Florida: State of Elite Recruiting

You've all seen/heard/participated in/hidden from the argument that Florida is the no. 1 producer of college football talent in America. Some are coherent; some make you wonder if common sense isn't really so common. But here at TN we've housed right-thinking thinkers on the matter for years. For example, TrueCubbie (rest in Internet peace He lives!) and harper.rb weighed in nicely: 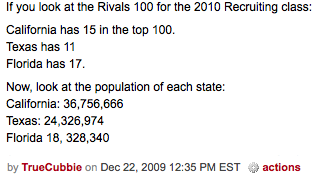 Florida is a unique state in terms of its football player production. TrueCubbie pointed out above the Rivals 100 in 2010 and each state's population. According to those numbers, the per capita production for the state of Florida is 2.1 times greater than that of Texas and 2.3 times greater than that of California. That is rather remarkable - why would one state produce more talent than the other? harper.rb chimes in with a nice qualitative description, citing the cultural commitment to football. And while football is King in Texas, Texas is yet 2nd place behind Florida.

So who is getting this overflow of talent from Florida? Your first hunch is probably the Big 3: FSU, UF and UM. What is the breakdown of elite Florida commitments amongst them? What other schools are making concerted efforts to poach? (Positional?) Delve deeper with me after the jump. 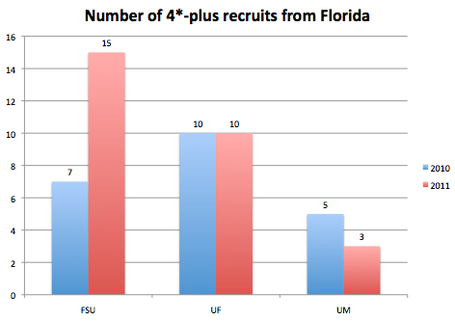 Let's look at the 2010 and 2011 ESPN Top Florida recruits. Specifically, we are looking at recruits who were rated 4* and greater. For the 2011 recruiting cycle, 62 prospects were listed as 4* or greater (3 of those 62 were 5*). *Note that ESPN did not start using stars for recruits until the 2010 recruiting cycle*

Florida State had one of its best recruiting hauls in the Jimbo Fisher era in 2011, pulling in the composite #1 class. 15 of its 4*-plus recruits came from the State of Florida (left), good for 24% of Florida's total elite recruits (right, below). That is an incredible number. For reference, UF's monster 2010 haul took in 10 of the 57 top 4*-plus recruits, good for 18%. Locally, FSU is getting the most of the best. 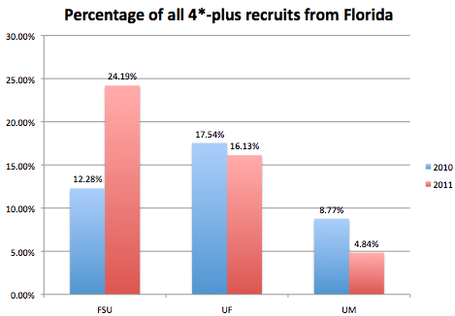 Total numbers-wise, FSU and UF are similar (22 to 20, respectively) since 2010 - while FSU is pulling in almost 3 times as many elite Florida recruits as UM. Al Golden, with Miami's limited football money, will really need to rejuvenate the local talent pipeline in South Florida to develop a good program.

But who else is getting these top recruits? In 2010, there were 57 top Florida recruits. 10 went to UF, 7 went to FSU, and 5 went to UM. In 4th place was Louisville. Charlie Strong still maintains strong Florida recruiting ties and understands just how vital the area is to a program's success. Louisville is #1 in poaching Florida talent outside of the Big 3 -- though actually he's tied with Miami for total recruits over that period (8). Miami is essentially being outrecruited by a program that lies a 1000 miles away from the same recruiting field that is on Miami's backdoor. That is a critical oversight - perhaps even just plain old negligence. Auburn and tOSU are tied with puling out 5 top Florida talents in the past two years. I'll reserve comments about Auburn's and tOSU's commitment to winning game$.