2010 Update on Stuffs (TFLs minus Sacks)

Share All sharing options for: 2010 Update on Stuffs (TFLs minus Sacks)

Perhaps the most fascinating and intellectually rich characteristics of American football is the constant cat-and-mouse game between opposing offensive and defensive play calling. One of the greatest compliments to retired FSU defensive coordinator Mickey Andrews was the advent of the spread offense; Mickey’s aggressive man-to-man coverage, speed rush, and front 7 speed dominated college I-form offenses throughout the 90s and into the early turn of the new millennia. (See Bud Elliot’s tribute to Mickey here)

Football coaches at any level will give you the same pre-game coach speak: "If we can stop the run, we can stop their offense." And though archaic, the axiom holds true. Success in the ground game is a great way to alter pass coverage schemes and force defenses to devote coverages and personnel closer to the line of scrimmage. You can't rush 3 and drop 8 if you're getting gashed by the rushing game. 2nd and short to-goes give offensive coordinators carte blanche to open up the playbook - a failure gives you 3rd and short, a situation most offenses can get a 1st down on. 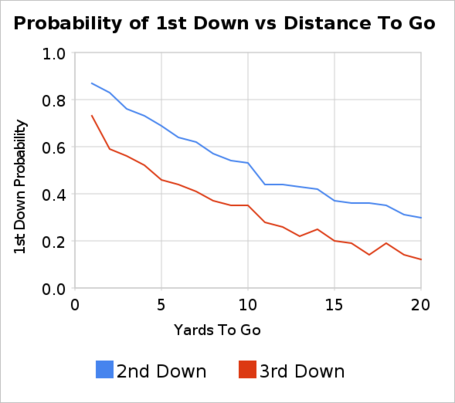 The graphic to the left shows that the percentages of eventually achieving a 1st down come out to 70% vs. 50% under a 2nd-and-5 situation as compared to a 2nd-and-10. This makes sense. Notice, though, how the probability on 2nd down drops precipitously when the result of the previous play was negative (i.e., >10 yards to go). Most notably, the 1st down probabilities between 2nd and 10 vs 2nd and ~12 goes from 55% to 45%.

A defense can stop the run by controlling the point of attack (POA) - that is, winning the battle in the trenches. The defensive line doesn't have to win every one-on-one battle to be effective. Maintaining gap discipline means successfully occupying the spaces in between the offensive linemen and minimizing holes and openings for backs to scoot through.

Mickey Andrews featured a defense built for speed over size, hoping to generate pressure on QBs in passing downs, and overcoming the lack of size on defense by utilizing the speed of the front 7 through penetration and gang-tackling. Unfortunately, the 2009 defense featured a complete lack of a pass rush from the DE position, average DT play, and LBs and SSs who took bad angles, or got eaten up by blocking linemen that no longer had to focus solely on 1st-level blocks. In short, we lost the POA through a lack of size and technique - especially from our front 4.

Though showing some late season weariness, the front 4 play in 2010 was significantly better than last. The hiring of defensive end coach D.J. Eliot - combined with a rejuvenated O'Dell Haggins and a championship-caliber strength and conditioning program under Vic Viloria - produced a dramatic turn-around for the defense as a whole. Not only has FSU reversed the 2009 trend of huge rushing gains against, the pass rush has been extremely productive. Junior WDE Brandon Jenkins has shown technique, hustle, and a still-raw ability to win one-on-one battles versus opposing tackles. Jenkins finished the season 5th in the nation as well as 2nd in the ACC with 13.5 sacks in 14 games (Binford salute to manquake DaQuan Bowers). There are rumors that Jenkins is north of 270 right now, which would put him size-wise near that of Bowers in 2010. (Count me as skeptical, in general, on rumored pre-season weights.)

But what about FSU's rush defense? One could point to Tackles-for-Loss (TFLs) as an immediate gauge of defensive prowess. A TFL is defined as any tackle ending in negative yardage (arguably, 0 yard gains have been recorded as TFLs). However, according to NCAA stat keeping, a TFL includes Sacks in its calculation. As mentioned in many comments on this site, this is undoubtedly conflating two very different defensive results within a statistic unnecessarily. So let's unpack it.

Subtract sacks out from the TFL, and we're left with a stuff. Stuffs can be especially demoralizing - blockers on offense are attacking defenders on run plays. So you're getting your best mano y mano shot in as an offensive player on those plays. A negative play here is like getting uppercutted when you're about to land a hook.

Here are the national numbers for Stuffs per rush against. The table is oriented from highest percentage (~most frequent at stuffing the opposition's run plays) to lowest for 2010 (ACC teams highlighted). Running plays against (Opp.Runs) have sacks removed.

When you think of stopping the run, you think of Kent State. Wait, what? Now the Miami (Ohio) defensive coordinator, Pete Rekstis dialed up a very strong defense. Consider this:

Now we know the NCAA conflates the rushing defense yardage by not removing sacks from the total, but those are still quite the impressive numbers. Speaking of impressive, did Nebraska (#4 in S&P Pass D) just drop 11 on every play? Yet they have the number 1 ranked F/+ defensive in 2010, and a not-too-shabby #25 ranking in S&P Rush D. Go figure.

Boston College was the highest-ranked major program on the list. This isn't surprising. Intelligent FSU fans have long recognized that Coach Spaziani is an incredible defensive coach. In the recruiting mold of a Virginia Tech, Spaz gets guys locally that others may or may not know about. Coach Spaziani makes up for the lack of elite recruits (national 4* and 5* players), though, by outstandingly coaching a front 7 that play off each other in a system as well as any front 7 in CFB. And the adjusted defensive stats back that up. BC's 4-3 is text-book in the praxis of an interdependent front 7.

Miami, NC State, and Clemson (2, 3, and 4 in the ACC) also featured a unique ability to stop opponent rushes for a loss. Given each team's relative talent level and coaching, this shouldn't be too surprising. On a slightly unrelated note, Miami's entire starting defense should be gone (graduated or turning pro) by this upcoming season's conclusion.

I found it astounding that FSU was 9th in the conference and in the bottom-half of FBS teams, ahead of Coach Botched's UNC depleted squad, ne'er-do-wells Duke and heavily-rebuilding GT. Given FSU's massive improvement in adjusted defensive metrics (107th to 41st in D F/+), you would think that FSU's increased size and focus on stopping the run would have featured an increase in Stuffs per run against. Clearly, this was not the case. But we have to acknowledge that the Stuffs.pP conflates scheme-calls and overall 1-on-1 ability of the front 7.

If you remember back to the first time I wrote about stuffs, I showed how just before the bowl season UNC was 2nd in the nation, averaging almost 6 stuffs per game. It's a little disconcerting to think A) just how good UNC could have been in 2010 with Austin, Carter, and the other misfits and B) they may have shut us down here in Tallahassee.

I realize that Stuffs.pP can be conflated between a dominating front 4 vs. a defensive scheme that likes to run-blitz alot. But we know that FSU isn't much of a cover-0 team (though with our CBs, we probably could gamble a lot and win with that). Having said that, it appears that the game in Charlottesville was anything but sportsmanlike. Go watch the highlights again and see if you don't come away with your ears ringing, too.

Credit NC State for an excellent gameplan and execution against a front 4 that was starting to fade due to lack of quality depth. They utilized a lot of pro-style straight ahead runs, and FSU's snapcount - especially at the interior DL positions - started to show. Note that this will not be an issue for future 'Nole defenses (barring some horrendous luck). FSU actually would not finish with double-digit Stuffs.pP for the rest of the season, though the defense was obviously rejuvenated for the USCe bowl game.

Finally, here's an individual breakdown of the top Stuffers from the 2010 campaign.