In less than two days, we'll be able to look upon Year 2 of the program Jimbo is building here in Tallahassee. In only his first year as head coach, Jimbo and Co. dominated the in-state championship with ringing victories over rivals UM and UF.

While Jimbo has had a hand in the offense as OC under Bowden starting in 2008, he was at most 4th on the totem pole prior to Jimbo's promotion to HC. But (most of) the playcalling was Jimbo's. With the hiring of Rick Trickett, the offense completely morphed as the blocking style and quality of linemen changed, commensurately. And we can see the change when we look at some of the advanced football rankings.

Check out FSU's '05-'10 S&P+ Offensive Rankings, broken down by rush offense ranking, pass offense ranking, and overall offense ranking. S&P+ is an advanced metric produced by the great people over at FootballOutsiders which takes into account Success Rate, Equivalent Points per Play, and Opponent adjustments. 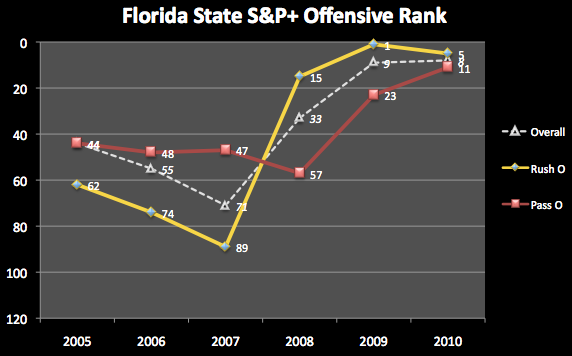 2006 was the final year for Jeff Bowden's Rainbow offense. The passing offense was still in the top half of D1 schools, but the rushing offense continued to drop from 2005. Enter Wake Forest and the cold November rain and a 30-0 shutout in Doak. (I remember staying through the entire game well after the rest of the student body had left because I wanted "to witness the end of FSU football."). By the way, we pulled out an 8-point squeaker against MAC powerhouse Western Michigan #smh that next week.

Jimbo couldn't turnaround the offense nearly as fast as the fanbase might have hoped for. In fact, besides a 1-rank increase in pass offense, the rush offense - under a patchwork OL - continued to plummet to nearly the bottom quarter of D1 rushing offenses.

2008 would be a much different story. Though the passing offense suffered, the rush offense was a revelation. As the OL matured and CP7 came into his own as an elite college QB, the offense has done nothing but become a Top 10 overall offense over the last two years. 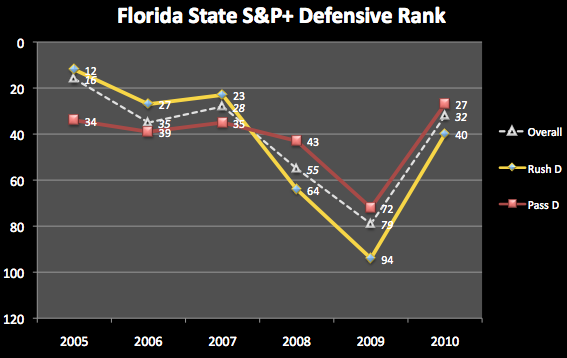 Defensively, there has been a general negative trend over the 6-year span - with the exception of an Everette Brown- & Geno Hayes-powered defense in '07. 2008 was a clear warning that FSU was getting manhandled in the trenches featuring pass-rushing ends and often-conquered interior tackles. The drop from 23rd to 64th from 2007 to 2008 should have prepared the fanbase on its own merit for the shellacking that the 2009 defense would take.

But the 2010 Stoops-led defense would recover impressively: 54 spots in rush defense ranking, 45 spots in pass defense ranking, and 47 spots in overall ranking. 2010 shows FSU finishing with its best passing defense in over 5 years in 2010. That is impressive. FSU finished 17th in Passes Broken Up per play and 23rd in Passes Defended (PBU+INT) per play.

Conversation Starter: What have been the watershed moments on-the-field where you saw FSU's offense or defense improve?