An early look at FSU's Week 3 opponent prior to Bud's Breakdown© on Friday. First, the OU fight song:

Kudos for keeping it short, to the point, stealing the tune from Yale, and - most importantly - effective use of 'Rah', which lends itself nicely to the cheer of "Rah-Rah-Ree; kick'em in the knee -- Rah-Rah-Ras; kick'em in the other knee." It's good to keep a fight song simple enough so that graduates can memorize it. (This slam is in fact a confession from a Norman-native and OU-fan whom I knew long ago during my undergrad days -- so it stands as authoritative.)

When you hear OU, you think of big physical linemen: Highly athletic and plenty of size. And this is true. But OU is far from a 3-yards-and-a-cloud-of-dust type offense. Interestingly enough, OU in 2010 averaged only 3.4 yards per carry. Take out the ridiculous sack yards that count against rushing because the NCAA is too busy following leads from athletes' Twitter feeds, and that number only goes up to 3.7 ypc. Their highest ypc games in 2010 were Iowa State (5.8 ypc), Texas Tech (5.6 ypc), and Utah State (4.6 ypc). None of these teams exactly scream stout front 7's. Then again, I've never heard a team scream "front 7's," so I will give them a pass here.

But does this mean OU has a mere average rushing attack? Well, in 2010 they did; they ranked 52nd in S&P+ rushing rank. But they featured the #7 S&P passing attack. 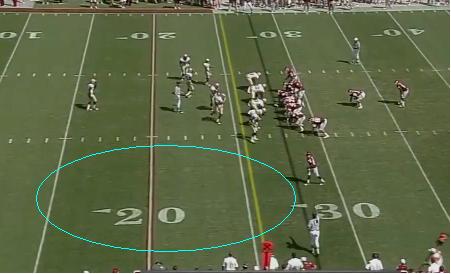 So what does this say about their scheme? They're a pass-first team. To keep the tempo up, they pass underneath soft coverages and often beat the chain gang to the 1st down spot (OU was #2 to Oregon with 26.5 first-downs per game in 2010). Landry Jones has shown an adroitness in identifying poor coverages, and last year's debacle in Norman featured a steady dose of abusing our safeties. Whether they were in Cover 3 or 4, Jones was able to find the (incredibly large) seams. This was undoubtedly the gameplan going in. A lot of their deep passes over the middle came with Ochuko Jenije at SS.

We will also be avoiding the Cover-0 look to your right.

Ronnell Lewis is good and eligible.

That's all I have to say here; I just needed a witty title.

Defensively, OU gives up some ground against the rush: 4.1 ypc, and 4.7 ypc after sacks are removed in 2010. However, they featured the #12-ranked S&P+ rushing defense; partially due to only giving up 14 rushing TDs (T-26th). The other part is that they faced the 19th strongest set of offenses in 2010.

The pass defense is another story. Using some raw metrics, the unit ranked T-10th nationally in allowing only 6.0 yards per pass, T-11th in 19 interceptions, 20th in completion %, and 8th in QB rating allowed. Using my own home-cooked 2010 adjusted pass defense stats, we see that OU opponents often passed a lot - a sure sign of being down by multiple scores. Their Interceptions per play as a percentage was 3.8%, good for 33rd or on par with Clemson and BC of 2010. However, their 71 passes broken-up (PBU) is good for #2 in raw numbers nationally and 10th in PBU per play as a percentage (14.3%) - on par with UM and Virginia Tech.

So 2010's OU was efficient on offense at a frantic pace, played average rush defense, better RZ defense, and excellent passing defense. We'll see Saturday if the 2011 version is similarly capable against Florida State at 8:00pm.