What a Difference a Year Makes

Share All sharing options for: What a Difference a Year Makes

Just over one calendar year ago the Florida State University defense rolled into Norman, Oklahoma with a newly installed modern scheme, some much needed additional size and a fresh boost of confidence following a spring of not getting scorched by its own offense.  That defense was bound to be much improved over its predecessor, but the previous week's proper dispatch of I-AA Samford provided no real indication of just how far they had progressed.  The answer was provided by the Nation's 14th best offense; a fast paced, efficient, wrecking ball facing a defense not yet comfortable in its own shoes.  The wake-up call was heard, loud and clear.

Last week, the Sooners rolled into Tallahassee facing a similar situation; an FSU defense with more size, depth, talent and expectations than its predecessor, but no real evidence to validate significant improvement.  With plenty of reason to believe the 2011 Sooner offense would be every bit as good as the 2010 version, this would prove to be a progress measuring stick for the FSU defense.  For anyone who doubted Jimbo Fisher's sentiments about this year's squad...you got your wake-up call Saturday night.

Fast paced is a dramatic understatement when speaking of the Sooners offense, which averaged 92 plays per game on the road last year.  And while you see just 56 plays from their 2010 contest against the Noles, keep in mind this was competitive playing time only--before the game was mathematically over--and included just eight plays after halftime.  They ran a total of 83 plays before the game was officially over.  Last weekend, there were only two plays run after the game was essentially decided and just 66 total.  This was their lowest output since the September 5th, 2009 loss to BYU, a game in which Heisman winner and current St. Louis Rams QB Sam Bradford was knocked out early. 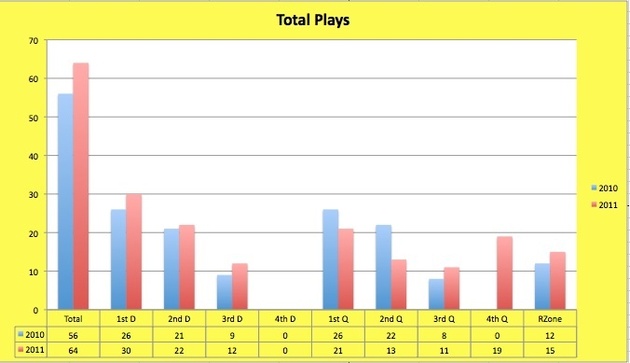 Last year the Sooners gained a full yard per play more than their season average.  This year, a full yard less.  Saturday's 310 total yard effort was their lowest since the November 21st, 2009 loss at Texas Tech and the 199 yard passing total, the lowest since October 3rd, 2009 at Miami.  Both of those games were played without the aforementioned starting QB, Sam Bradford. 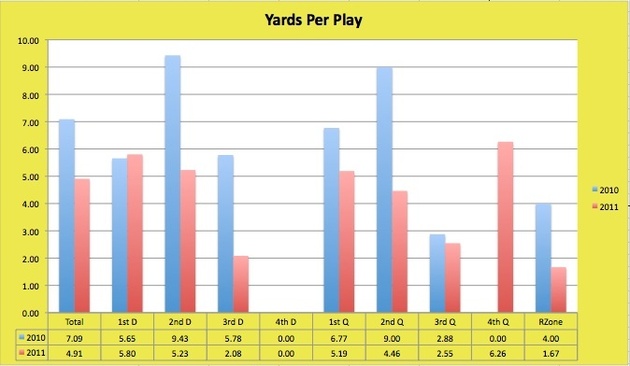 Success rate is a per play measure of how well the offense moves the ball compared to the distance needed to obtain a first down.  This outstanding metric was developed by Football Outsiders, with a slight personal modification that includes any conversion from a passing down to a standard running down as "successful".  Although I don't have historical data from other OU games for comparison, the picture sums up the story neatly.  What should really draw your attention is the drastic change in 3rd down success rate, which is equivalent to the more familiar "conversion rate". 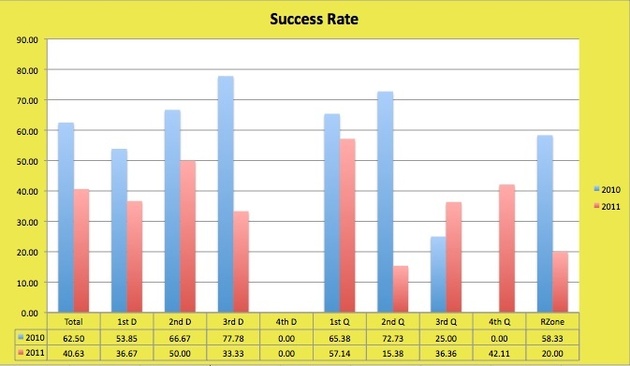 Explosive play rate is another concept quantified by FO, this one, to measure the big play frequency.  I define it by statistical significance--the average gain per play plus two standard deviations--partly because I'm not sure of the FO definition and partly because...I just like statistics.  While the graph makes it obvious OU had fewer big plays, just to give friendlier terms: they had 13 plays that gained at least ten yards in 2010, compared to nine this year and five plays of at least 20 yards in 2010, compared to three this year.  The big play reduction is drastically understated here because, once again, the 2010 game total was accumulated in just over one half, while the 2011 total included all four quarters. 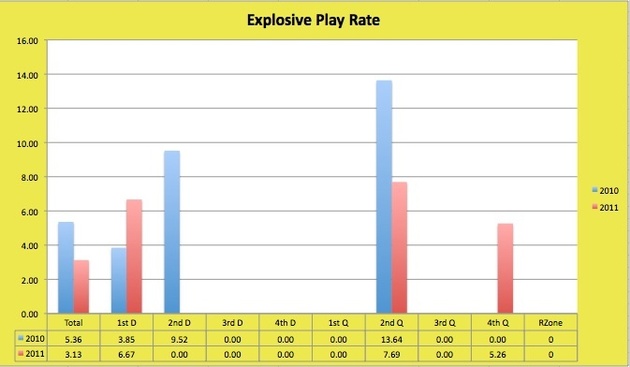 Negative play rate is my way of covering both extreme outcomes on a per-play basis--the other being explosive plays.  It is defined exactly as it sounds; any play that is stopped behind the line of scrimmage is negative.  The 5.36% rate in the 2010 game included a total of three plays; one sack, one two yard loss on a run and one botched snap that had nothing to do with FSU's defense.  This year there was one sack to go along with four runs and two screen passes dropped for loss. 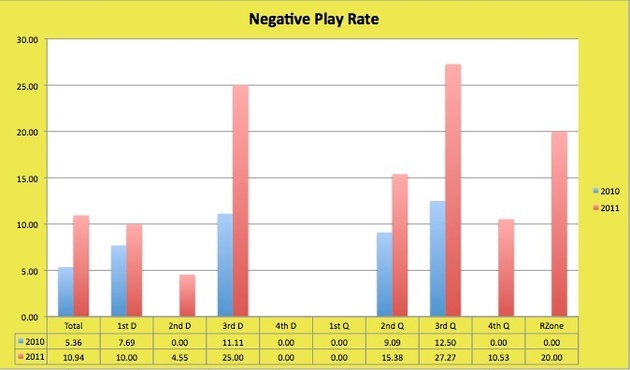 This was one of the Sooners' least productive offensive outputs since Landry Jones was forced into early action as a freshman following Bradford's injury.  It is always risky to draw too many conclusions in September, but a very safe bet the FSU defense has come a long way in the last twelve months and just might be very, very good.