Share All sharing options for: ULM Game Stats: Part One

This is the first installment of the Noles opening game statistical breakdown showing an overview of the five major categories we'll be tracking all season.  Film review is in progress and upon conclusion there will be plenty more analysis throughout the week.  The complete play-by-play data can be viewed here.

A set of numbers can be very adequately described using a few standard statistical measures.  The sum gives a good idea of the size and composition of the data set.  The mean tells you the average, expected or "typical" result.  Variance and skew describe the consistency about the mean and give some idea about the extremes.  None of these terms are particularly football friendly, however.  As such, I've chosen five basic metrics--plays, yards per play, success rate, explosive play rate, negative play rate--that, collectively, give the same descriptive qualities, but without the math jargon.

As usual, plays that occurred after the game was mathematically over are not included and metric explanations are provided here.  Below, we have the FSU-ULM game stats graphically categorized by down, quarter and redzone. 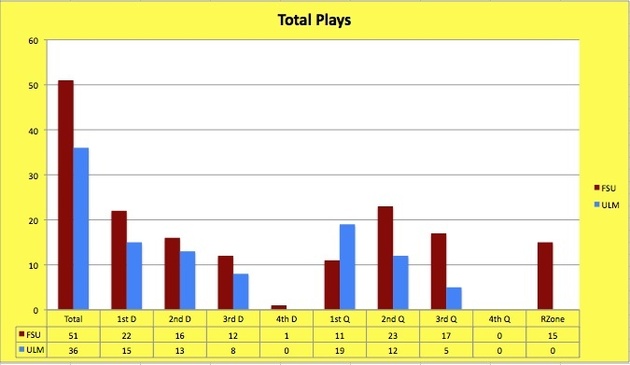 It was refreshing to see FSU's defense getting off the field easily.  It is important in games like this to get the starters some reps, get them out before they get hurt and get the young guys in.  The 36 non-garbage time play total was lower than any 2010 game. 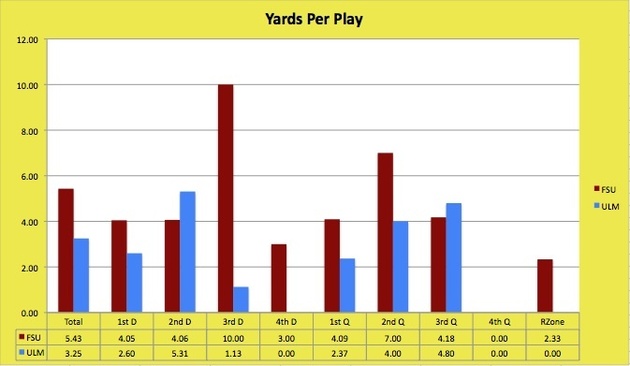 I was expecting a little higher output from the offense, although 5.43 isn't bad considering it's week one.  And I wouldn't be surprised if ULM's defense turns out to be a little better than expected.  At first look, they seemed to have a decent collection of athletes.

Defensively, not much to complain or be terribly excited about in these numbers. 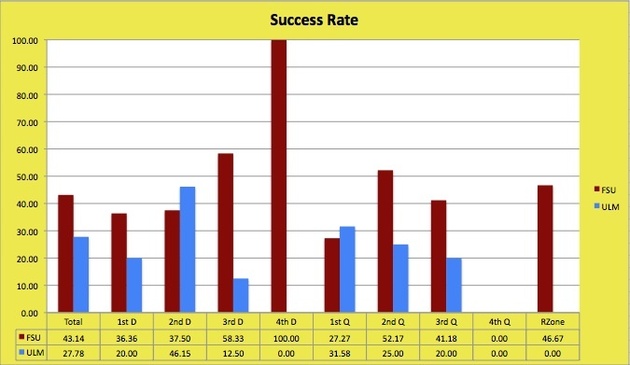 Offense needs more consistency on early downs.  I was very pleased--after fielding the ACC's best 3rd down offense and 8th ranked defense--with the huge advantage in 3rd down success rates. 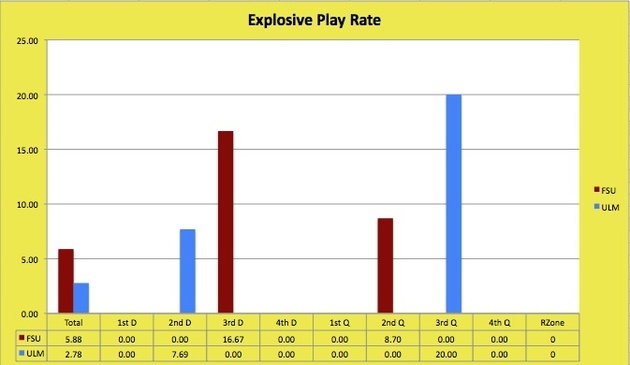 Big plays, even against a few poor offenses, hurt the Noles defense last year.  They only gave up one in this game, a 17 yard run in the 3rd quarter.  Offensively, I'd really like to see FSU's skilled players occasionally get something extra--break a tackle, make the first guy miss, etc. 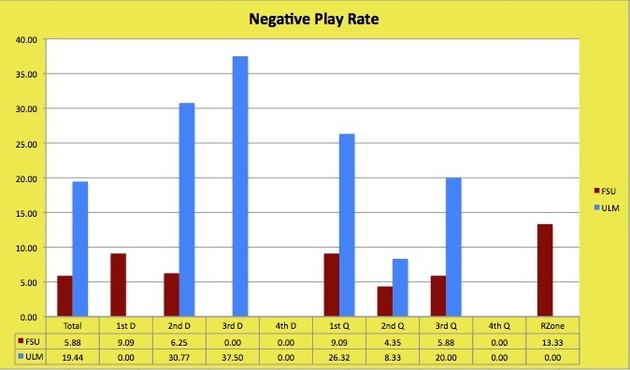 One of the key stats I'll be looking at this year is fewer negative plays from the offense, which was middle of the ACC pack in this category last year.  Defensively, no complaints.  Not bad on offense either, except the negative plays in the redzone.