Share All sharing options for: Week 2: FSU vs. CSWho. Hey, that rhymes...

Bud has asked me to look for odds-and-ends about FSU's upcoming opponent each Thursday. CSU is forcing my hand on focusing on the former rather than the latter for this edition.

Pick up your tickets for the game http://www.tomahawknation.com/seminoles-tickets

Charleston Southern: You can go party at College of Charleston

Nestled warmly in North Charleston, South Carolina, lies Charleston Southern University, a B.S.- and M.S.-degree awarding Baptist school. Founded in 1964, TomahawkNation has commentariat older than this school. If you ever find yourself making your way through campus, make sure it includes a visit to the Strom Thurmond Student Center. I find this interesting, as the prevailing sentiment amongst congressmen in the late 90s regarding Strom was to never let your female aides be alone with him in an elevator. #handsy

Charleston Southern - which does not issue press releases on what they want to be called - is arriving in Tallahassee for game two of its Sunshine State tour (UCF - 9/4 ; FSU - 9/11 ; JU - 9/17), fresh off a 62-0 beatdown at the hands of arguably the 3rd best team in the state UCF. The Golden Knights from Orlando finished the 2010 season with a record of 11-3, beating Georgia 10-6 in the Liberty Bowl. UCF's overall F/+ ranking was 37th; in components, their offense ranked 57th and their defense 32nd. UCF returned 7 starters on offense but only 4 starters on defense. This seemed to not help CSouthernU's cause.

Speaking of the Transitive Property

Deciding that getting paid to be throttled by major football programs would be worthwhile venture, CSouthernU entered the football landscape in 1991 and has since amassed a whopping 74 wins and 132 losses. CharlestonSU finished the 2010 campaign with a 1-5 record in Big South conference games (3-8 overall), though they did go 4-2 in 2009. This year's offense features 4 returning players and the defense, 7. It doesn't appear that any of those contributed in a positive way at all in the UCF drubbing last week.

C.S.U. likes to run the one-back set, but they are multiple (or so their media guide says); they will call similar plays out of different formations in an attempt to confuse defenses. Using a similar David-strategy on defense, they employ the 3-5-3. Schematically, this is the same personnel as the 3-3-5: 3 DL, 3 LBs, 2 CBs, 1 Free Safety (FS), 1 Strong Safety (S) and 1 Weak Safety (W). They are currently looking for ways to incorporate the TV timeout official into their base defense more. The S and W are essentially mirrored positions. Walking the S and W up puts 5 backers in the box; thus, the 3-5-3. (You can also sub in a CB for a S if you're going for the JV-"He'll fill out as he gets older"-look.) From an X's and O's standpoint, this look gives you perimeter support, zone blitz options, cashback anytime you use your Rewards card, and emphasizes the recruiting of LBs/DBs - which are much more abundant than, say, the Mario Edwards, Jr.'s of the CFB recruiting landscape. 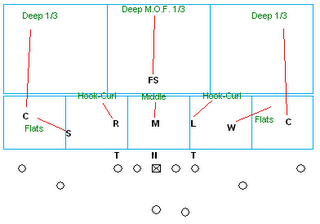 No doubt CS-U will feature a Cover 3 and put 8/9 guys in the box a la ULM to not get gashed against the run. Saturday's scrimmage will be very important for Manuel checking into the right play given the presnap defensive alignment. Unfortunately for them, C-So.-U is a bit out-manned in talent, speed, and size. Their 3 DL are 250, 300, and 240. As opposed to a traditional strategy in a 3-man front, the down-linemen (ends, especially) are not being asked to each absorb double-teams to keep opposing OL off the 2nd level of defenders. Rather, they'll be asked to slant left or right every play. Why? Because unless you have 3 space-eating DL on the field, you need your guys to shoot gaps to confuse linemen and, hopefully, create pursuit angles for the guys in the box. If you go back and look at some of our outsize zone runs in the 3rd quarter, you'll see FSU get some big gains in response to this setup.