Thanks to my friend Chuck and FSUcyberpunk I now have the ability to create videos. (NationWideNole also kindly offered to provide videos for me). Anyway, I played around with it this morning, and here's a quick look at why Duke didn't press very often yesterday. In this first image, the ball has been inbounded to Michael Snaer. 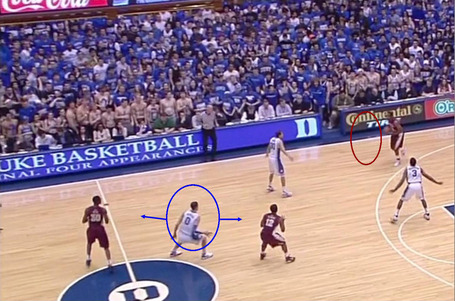 First, you'll note that my garnet circle is supposed to indicate Snaer, but I completely whiffed him by about 5 feet. Sue me. But with Tyler Thornton and Seth Curry playing in a soft press Snaer is looking to push the ball forward to Jeff Peterson (#12) or Ian Miller (#30). Ian Miller goes to the corner which forces Austin Rivers (circled in blue) to commit to Peterson. Snaer has great size and is easily able to pass over Curry to get the ball to Ian Miller.

Here we see that Duke made a mistake. Allowing the pass over the top put Ian Miller (circled in garnet, below) in a one-on-one matchup with 6'11 Mason Plumlee (circled in blue). 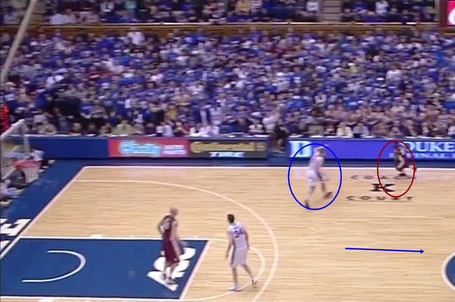 The arrow indicates Austin Rivers, who is nowhere to be found. Rather than sprinting to the spot as soon as the pass was made, he lazily followed Jeff Peterson toward the left wing, leaving FSU essentially in a 2-on-2 break. The decision here is on Kreft. He can either a) step out and screen Plumlee, b) go to the low block and post up Ryan Kelly (#34), or c) make the smart play... 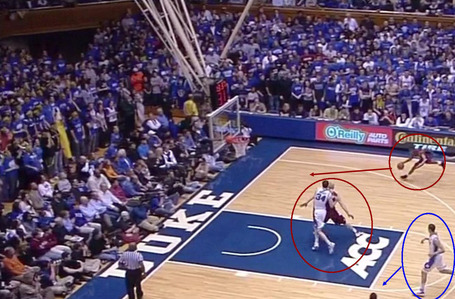 Realizing that Plumlee couldn't slow down Miller without fouling, Kreft immediately seals Kelly preventing him from cutting off Miller. Austin Rivers, meanwhile, decides to allow the layup rather than leaving Peterson.

Here it is at full speed: