A look at FSU's defensive breakdowns

FSU's trademark defense has been absent this season, but will they find it in time to for ACC play?

Share All sharing options for: A look at FSU's defensive breakdowns

FSU's defensive efficiency has ranked No. 1, No. 1, and No. 15 in the previous three seasons. But we all knew it would take a step back this year. In the season preview I predicted that the defense would finish around No. 65 for the year. Currently, they're No. 83.

It has been improving. In the first few games FSU was routinely getting torched by simple plays. Those things still happen, but it seems to be getting better. Beginning with the Florida game, FSU has taken a major step up.

But breakdowns are continuing to occur. So I re-watched the FSU vs Charlotte game with this in mind - and now there is good news and bad news. The good news is that the majority of defensive lapses seem to be caused by poor technique rather than lack of understanding of the principles the staff is trying to instill. The bad news is that poor technique is easy to identify on film, but that poor technique is also deeply ingrained in these players. The coaches can teach them how to do things, but when the game is flying by at Division I speed, the fix becomes difficult.

Here are a few examples. The first play is a breakdown by sophomore Terry Whisnant. Early in the play he shows perfect help defense technique. The blue line is the path the ball would travel were it to be passed. When you're playing help defense (red arrow) you want to be cheated toward the ball and one big step off the passing line. Were he playing denial defense, he'd be closer to the blue line with his hand in the passing lane. 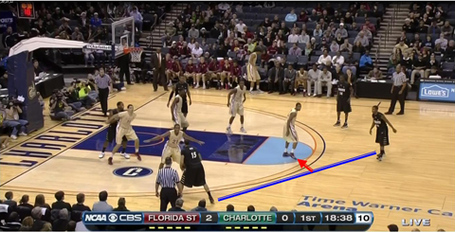 But after Charlotte works deeper into its set, Michael Snaer and Kyle Turpin (circled, left) get a trap on the ball in the corner. There's only one angle for the ball handler to get rid of the ball, but Whisnant (circled, right) is slow jumping that lane, allowing for an easy escape. 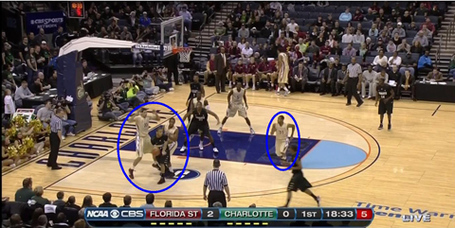 Then he complicates his mistake with a poor closeout (circled). Closeouts need to occur under control, hand up, finished with short, choppy steps which lead into a solid defensive stance. But Whiz is off balance, which allows the shooter an easy side step and three. 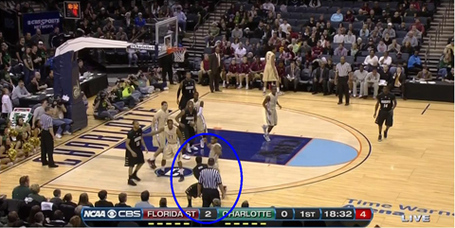 The second play gives a good look at how a proper closeout looks. Michael Snaer shows how it's done, and then because his hands are always active, he gets a deflection but the ball goes out of bounds. 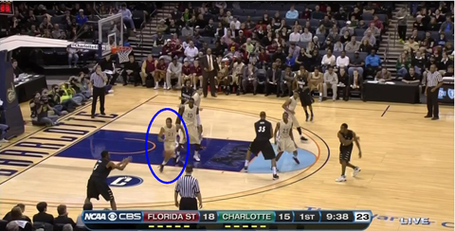 Once the possession continues Charlotte runs a center isolation and Turpin doesn't play physical enough to keep in front of his man. He gets sealed high and this leads to an easy bucket. Okaro White does a good job mirroring the ball (red arrow) with his left hand, but they're still able to execute the pass. 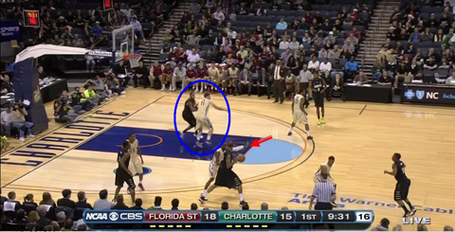 The final play starts with Montay Brandon getting screened (circle) and Aaron Thomas (arrow) in position to play help defense. 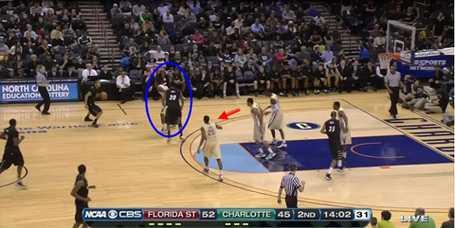 But Brandon can't fight through the screen, and Thomas fails to make the proper read. He's still in help defense. Note the plane of his body (blue line). Instead, he needs to be squared up on the ballhandler. This allows the ballhandler to go left for an easy jumper. 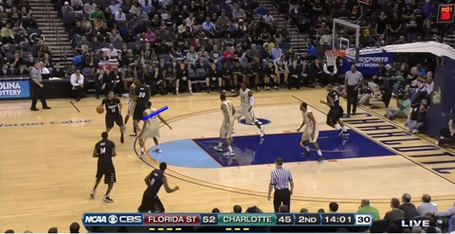