FSU travels to Miami for the Orange Bowl Classic

Share All sharing options for: Florida State vs Tulsa

This team seems to have found its offensive identity (Be aggressive, B-E aggressive! B-E A-G-G-R-E-S-S-I-V-E). Michael Snaer is going to shoot. A lot. And everyone else needs to look for opportunities in transition. A ticking clock is just a reminder that the team is that much closer to a turnover. Only one Leonard Hamilton coached team has played at a higher tempo, and I'd expect this team to be No. 1 by season's end.

But if this team wants to fulfill their potential, then they need to find their defensive identity.

The past three FSU teams have been ranked No. 1, No. 1, and No. 15 in defensive efficiency (of 347 Division I teams). That was fun to watch. That made an impression. This year, FSU is 80th in defense. 80th! And the reason is that six seniors were replaced by first year players. And the first year players lack two things: a) effort, and b) understanding.

The reason Leonard Hamilton has been successful at FSU is because he can fix the two things which these players don't have. His defensive genius isn't just his mastery of a huge array of defensive schemes, but it's also his ability to motivate kids to give a complete and total effort. That part is going to take care of itself. If you don't give everything you have on defense, then you're out. Yes, Ham is patient. Yes, he'll do his part. But at some point, if you don't give enough effort he'll sit you until you do. Terry Whisnant learned this lesson on Saturday. With 250 people from his tiny town in attendance, he loafed a few possessions early in the game and promptly sat the rest. You want to play? Then play hard.

The understanding is another issue. No defense, no matter how experienced, is going to be able to execute the variety of looks that Ham wants them to be able to execute. Rather, it's how much of it can he trust you with. Last year's defense, for example, was composed of a number of upper classmen who understood what they were doing. And Hamilton mixed defensive looks as much as he's ever done. For the most part, he trusted them. The vast majority of the defensive possessions were from a helping man-defense, but he had the ability to pull out so much more. He played help. He played deny. He handled screens every way they could be handled - he even switched screens small to big and hedged screens guard to guard. He went 1-3-1. He went 2-3. He dropped a 3-2 on Duke which stoned them. By the end of the year he'd switch man to zone in the middle of a possession in which the clock never stopped. He pressed, and he did it from multiple looks. FSU pressed on probably a hundred possessions last year, and I could easily write 2,000 words on the variety contained therein.

Following last year it's been strange to watch this year's defense. This defense is V-A-N-I-L-L-A. For the first seven games FSU showed one look, and one look only. And it wasn't particularly good. It was just a man-to-man, pressure, help defense that gave up way too many layups. There was a token press against BYU but that doesn't count. That wasn't defense. That was just a way to help control the tempo. The eighth game was the Florida game, and that's when I predicted that FSU would show another look. In the preview I wrote that the Noles might look to steal a possession or two by surprising UF with a zone. But it didn't happen. Perhaps it was because the game was a blowout early, or perhaps because they weren't ready.

It wasn't until the next game that FSU went zone. It couldn't have been more than two possessions vs Maine. I just remember it happening, briefly. Then FSU blew out Louisiana Monroe, and there was no need for a zone.

And then Charlotte. An 11-1 team, on the road. And for the first time this season Leonard Hamilton trusted his team to be multiple with the game on the line.

With 15 minutes left in the game and FSU clinging to a 2-point lead, Ham finally went Ham. It starts at the top with Michael Snaer (circled) pressuring the ball handler. That's the foundation of the defense - pressure the ball. If the ball handler is comfortable, the defense isn't working. 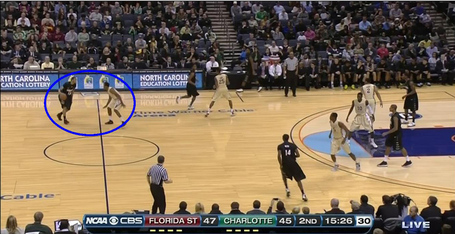 It takes Charlotte about ten seconds to get the ball into an attack position in the corner. Montay Brandon (arrow) properly closes out the shooter, while Terrance Shannon (circled) wrestles with his man in order to get in front of him. Note that all five players have their eyes on the ball. 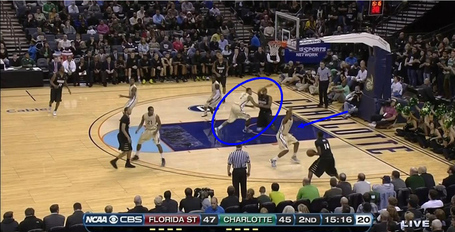 Shannon (arrow) gets there just in time to tip the ball, and though it actually goes off the Charlotte player, FSU doesn't get the call and the 49ers have a baseline inbounds. 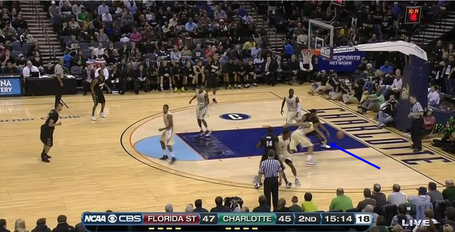 On the inbounds play, FSU goes with a 4-man denial (don't let your guy get the ball) with Michael Snaer (circled) playing help defense to keep anything from happening under the basket with a cutter. Charlotte isn't able to get the ball in, and has to burn a timeout. 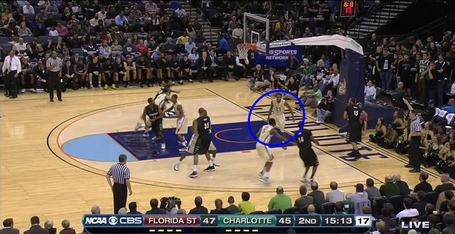 And here's where Ham takes over. Ham switches from a 4-man denial to a 5-man denial, with Michael Snaer (circled) harassing the ball handler. 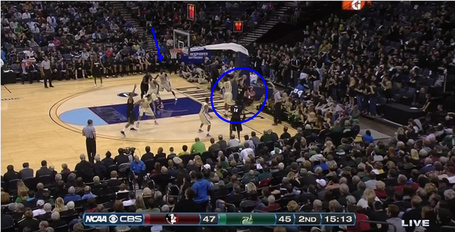 Charlotte is able to get the ball in this time, but the only have :15 seconds to work with (arrow). And they're instantly confused because FSU, which hasn't played zone all game, and who have only shown a few zone possessions all year, is now in a 2-3. It's clear Charlotte didn't discuss this during the timeout, because the players don't know what to do. 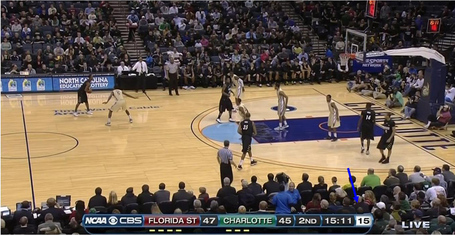 It takes them 11 seconds to get anything close to a shot opportunity (circled). But they don't get anything off and FSU forces a shot clock violation. 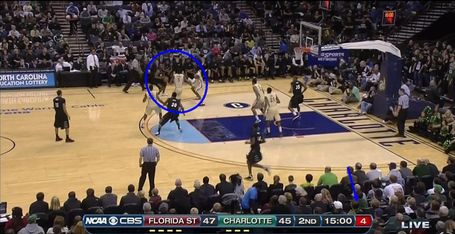 This ended up being a one-possession game. And this one was stolen by Leonard Hamilton. Here's the video:

Today that defense goes up against the Tulsa Golden Hurricane (7-5) in the Orange Bowl Classic. Tulsa is led by first year head coach Danny Manning. Manning, who won a National Title both as a player and an assistant coach, spent 9 years working under Bill Self at Kansas.

They've struggled offensively and have been without their leading scorer (Rashad Smith) since the 4th game of the season. They turn the ball over a LOT (330th nationally). Their strength is their ability to attack. They draw fouls. They get to the line.

The two players to watch are freshman James Woodard and senior Scottie Haralson. The 6-4 Woodard is one of the top freshman in the nation, and a candidate to be a freshman All American. He's averaging 14.1 points and a team best 6.1 boards. He's a capable 3-point shooter, but is more deadly attacking.

The 6-4 Haralson (not to be confused with freshman Shaquille Harrison) played in the Final Four with Connecticut before transferring to Tulsa. He's the player most likely to keep Tulsa in the game due to 3-point shooting. He attempts 70% of his shots from beyond the arc, and has made 38%.

Defensively, Tulsa is a very solid team. They rebound well (42nd nationally), but they're foul prone and FSU could very well spend a lot of time at the line. FSU will need to take care of the ball and hit their free throws.

The game tips at 2pm and will be broadcast on Fox Sports Net. Vegas has FSU as a 10.5 point favorite, while Pomeroy has FSU -9.