FSU Baseball Opening Weekend: What We Learned From The Sweep

Share All sharing options for: FSU Baseball Opening Weekend: What We Learned From The Sweep

FSU baseball opened up this weekend with a series sweep over the Hofstra Pride. There will be the people who say "Well, it was Hofstra. It's too early to really learn anything." It was Hofstra, however, there are some important things to take away from the series. There were some positives, some negatives, and some things to look forward to as the season progresses. The Noles were able to outscore Hofstra 32-16 in the 3 games. FSU's offense hit at a solid .343 clip, had 7 players with atleast 4 hits, and had 5 HR's as a team.

We got to see the freshman class on display for the first time, and they were very impressive as a whole. The two freshmen hitters in the starting lineup had solid debuts. John Nogowski was 4-11 on the series with 3 RBI, and added a HR in Sunday's finale. Jose Brizuela went 4-10 with an extremely impressive 8 RBI and a HR. These two young men were very good this weekend and will continue to improve as the season wears on.

The two freshman starting pitchers held up their end of the bargain as well. Brandon Leibrandt, who became the first freshman to start on opening day in over 50 years, rebounded from a tough first inning and cruised to a win in Friday's game. Leibrandt allowed only 3 hits through 5 innings, and added 2 K's. He was very composed, especially for a kid with an immense amount of pressure on him. Mike Compton was named the Sunday starter and also had a very solid outing. Like Leibrandt, he had a tough first inning, but came back out and finished very well. He scattered 4 hits through 5 innings, with 3 K's. Compton was very smooth, and once he got in the groove, he was very tough to handle. The thing about Compton is that every pitch he throws, comes out of the same arm slot, with the same arm speed. This makes it extremely hard for hitters to recognize the pitch. 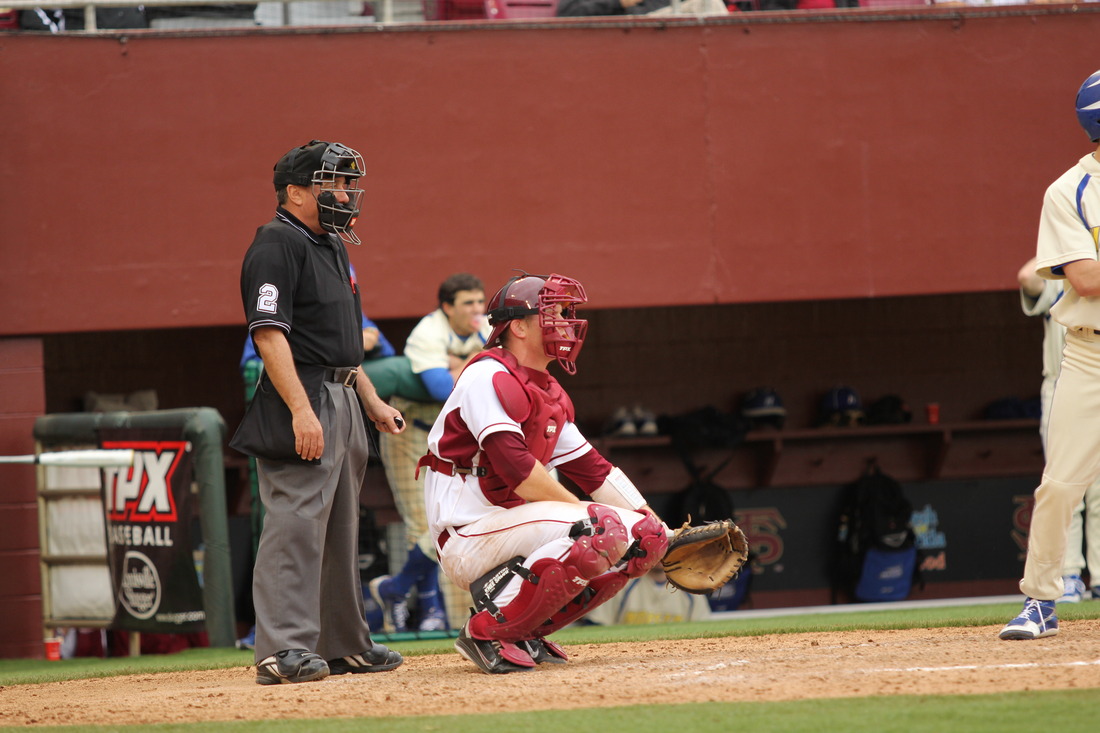 I came into this weekend thinking that the main reason Steve McGee was named the starting catcher, was because he had been here longer than Freshman Mario Amaral. I believe I may have been wrong in this assumption. McGee looks like he has gotten in better shape for this season and really looks the part. There had been concern that McGee wasn't good enough defensively to hold the position, he looked very good all weekend. McGee threw out 4 runners in the series and blocked the ball well. He's not Rafael Lopez, but he was well above average this weekend defensively. He's been known to have some mental lapses, we will have to keep an eye on those, but he looked much improved over last year. He also hit the ball well, going 4-10 at the plate. I expect McGee's offensive production to decrease a little once we see some better pitching, but if he can continue to play well defensively, I'll be surprised if he loses his spot. 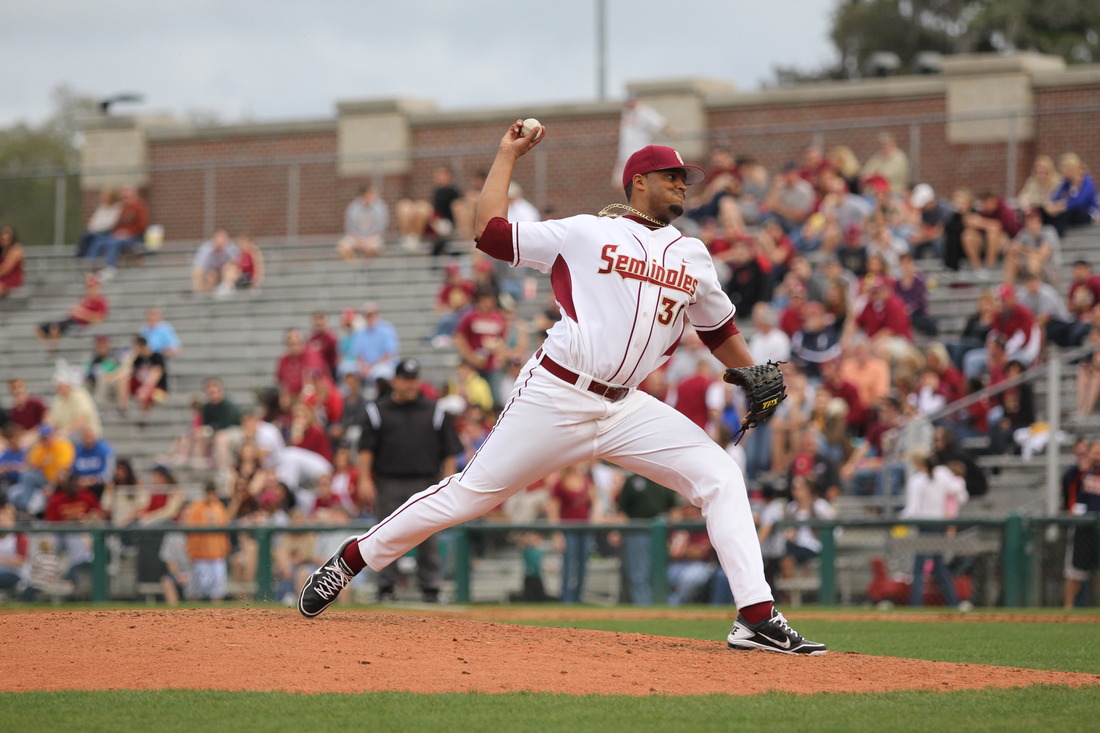 Saturday's game opened with a less than stellar performance by Peter Miller (something I'll get to in a minute) that lasted only 1.2 innings. When the starting pitcher makes it through less than a quarter of the game, it typically requires a very good long relief appearance to win. That is exactly what the Seminoles got out of Hunter Scantling. Scantling went 5.1 innings, allowed 6 hits, and only 1 earned run. His line may seem just decent, but his actual performance was far greater than that. Scantling has dropped nearly 15 pound in the offseason and looks like he is in much better shape. Pitching coach, Mike Bell, has also been working with Scantling on his arm action. A pitcher's arm action is the amount of whip in the delivery. Scantling had a bad habit of pushing the ball to the plate, which translates to a loss in velocity. Last year he sat around 86-87 mph. On Saturday, he was consistently around 90mph. The increased arm action also allows the ball to jump out of his hand much better than it did before, making it look even faster to the hitter. If Scantling can continue to throw the ball like he did this weekend, I would not be surprised if he jumps into the weekend rotation. At the very least, he gives the Seminoles a dependable long arm out of the bullpen.

As impressive as Scantling was on Saturday, Peter Miller was equally unimpressive. He's a guy with great potential, but has struggled finding the strike zone on a consistent basis and Saturday was no different. He was unable to get his fastball over the plate for a strike, making him very predictable. The first time through the lineup he threw 7 of 9 first pitch curveballs. He allowed 3 hits and 2 walks in his 1.2 innings, a WHIP of almost 3, which will certainly not get the job done. He was not helped by a few errors in the field, but the lack of control with the fastball will get him eaten alive against better teams. I think his future in the weekend rotation is in doubt and will depend on the coaches feelings about Hunter Scantling's outing and very possibly Luke Weaver's start on Tuesday.

Whether this is a function of the opponent or not, I am not sure, but this weekend FSU seemed to put the game on cruise control after 5 innings. Sunday was a perfect example of this. The Noles were up 10-2 in the 7th inning, and the final was 13-6. I believe that this was in large part due to Mike Martin's choice to bring in some younger guys off the bench and to the mound, so I'm not that concerned. Also, even when Hofstra was scoring runs, the thought of them actually winning a game seemed farfetched. I had the same feeling about Saturday's game. Not sure if it was the expectation that the rain would delay or cancel the game, but the Noles came out and didn't really look sharp from the beginning with 2 errors in the first 2 innings. I think this is a very good ball club that will turn it on when the good teams come to town, but I would like and expect to see a little more intensity from start to finish as the season progresses.

Overall, the weekend was full of promise. In all 3 games, the Noles surrendered 1st inning runs, but fought back and won. The offense was very good. The guys you expect to hit well, did, and the bottom of the lineup was a pleasant surprise all weekend. Compton and Leibrandt were very good and I don't think it will be hard to find a 3rd starter, whether that's Scantling, Weaver, or possibly Benincasa. I'm really looking forward to Luke Weaver's start on Tuesday and think that if he can go 5 innings, give up less than 5 hits, and keep Jacksonville under 3 runs, FSU will have a very good chance to win the ballgame. I also think that if his outing looks something like that, he will find his way into next weekend's starting rotation against FIU. JU is no pushover, they're ranked 38th in Perfect Game's Preseason top 100, and we should get a decent look at the potential and ability of this team.

Also, all of the great photos in this story were taken by my good friend Bradlee Rutledge. He'll be taking pictures all year long from down in the camera well, hope you enjoy them!