The art of football conference affiliation bragging was set up quite naturally with traditional bowl game ties and further encouraged with the advent of the BCS. Main stream media fuels the fire each year with rudimentary power rankings and ridiculous bowl season challenges. Simplicity is the commonality between these conference comparisons, in that they dig no deeper than wins and losses. This is not to say the conclusions drawn are necessarily erroneous, but correct answers born out of flawed evaluation deserve little praise. With SEC chants reaching a crescendo and non-SEC folks finding fewer reasonable detracting arguments I've noticed a growing debate over who deserves the heralded #2 billing. I've even been fortunate enough to receive idiotic tweets claiming the mid-major flavor of the month as superior to one or more BCS conferences. Rather than dismiss any case arbitrarily, I decided to quantify matters using the most comprehensive rating system in existence that, most importantly, gives ample numerical consideration to quality of competition. This is a five year evaluation based on the rating systems developed by Football Outsiders.

The first graphic displays the average team performance for each division I-A football conference over the last five years. As most of you know, the SEC won the BCS title in each of these seasons and for the first time in history sent two teams from the same conference to the championship game. From year to year the other conferences fluctuated rather dramatically, but over the five year span did not distinguish themselves from one another. What is important to note here is the considerable gap between the SEC and everyone else. It really is that big of a difference. They have been that much better. Another important concept to grasp: the gap between the best mid-major and the worst BCS conference IS BIGGER than that between the worst and best BCS conferences. And quite clearly you can see the BCS conferences all have positive team efficiency ratings (good), while the little guys have negative ratings (bad).

The SEC averaged more top-20 teams (4.2 per year, edging out the B12 with 3.8) and more 21-40 teams (3.4 per year, over 3.0 ACC teams) than any conference. This should help people realize it's not just about being top heavy, unless 2/3rds of a conference is considered "top". With 8.2 top-60 teams per year the ACC was second only to the SEC at 9.6 per year. And those two conferences were the only ones to not produce a bottom-20 team in any of the last five years. 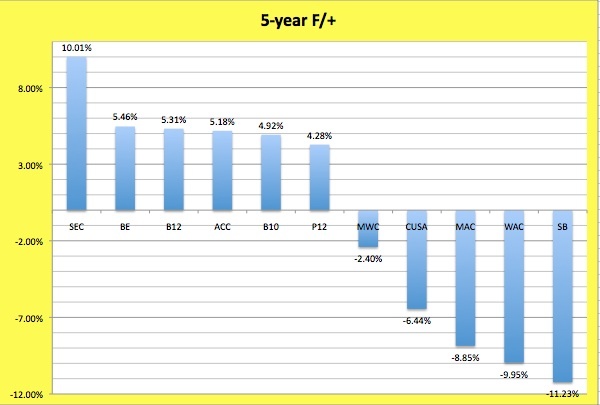 The Big-12 has produced some really incredible offenses, finishing with 7 top-10's between 2007 and 2008 alone. 2009 was a serious drop-off year with only two top-20s (TTU and TAMU) and three in the bottom 22 (including Oklahoma and Nebraska). But as most traditionalists will tell you and forthcoming evidence supports, defense is what matters most. It should also come as no surprise--to those willing to pay attention--just how awful ACC offenses have recently been. With only three top-10 finishes over five years (GT, FSU and FSU) it is the only BCS conference below the mid-major Mendoza line. 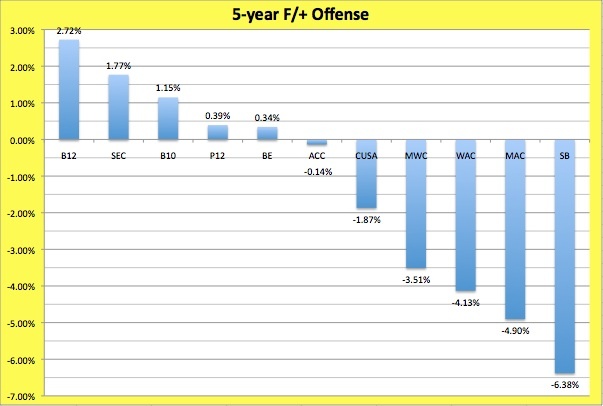 The Big East not only produced the 2nd best five year average, but also boasts the best single season performance by any team with WVU's 31.50% rating in 2010. Alabama's 2011 defensive efficiency rating (22.40%) was the lowest top single season rating in the last five years. The SEC led the way with a total of nine top-10 defenses, while the ACC was second with eight. The weekly Big-12 shootouts are fun to watch, but damn the defensive ratings take a beating. 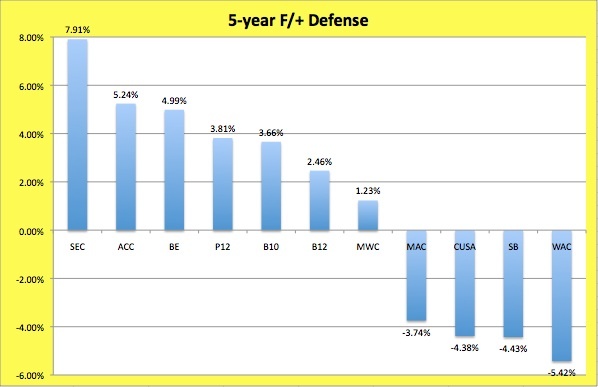 Special teams value is incredibly underrated. Apparently, the SEC gets it. I think this is partly a function of athletically gifted underclassmen contributing while waiting their turns as regulars. If not for Virginia Tech and FSU, the ACC would have mid-major status. Speaking of which; according to the method used in this study (which is not necessarily correct) the dividing line between major and mid-major is quite clear. As such, the remainder of this discussion will include only BCS conferences. 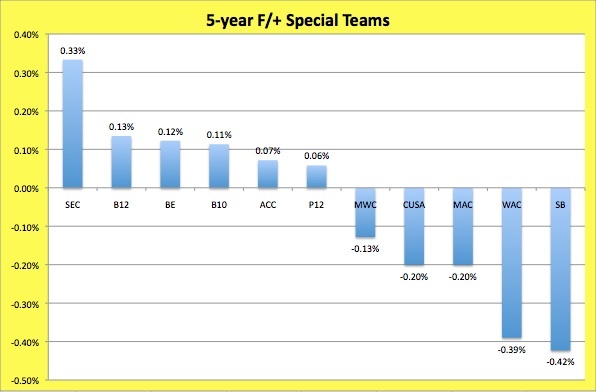 The Big East had strong 2007 and 2008 performances--finishing 2nd and 3rd, respectively--which were enough to maintain the #2 five-year average, but only 5th best over the past three. Rodriguez, Kelly and Leavitt all built respectable programs--and are now all gone--posting top-25 teams in each year and even cracking top-10 twice. 2008 was a terrific year for the ACC, with eleven top-60 teams and its lowest rated, Duke, finished at #66. It's been almost all or nothing for the Pac-10/12 as they've finished 2nd twice and last three times. 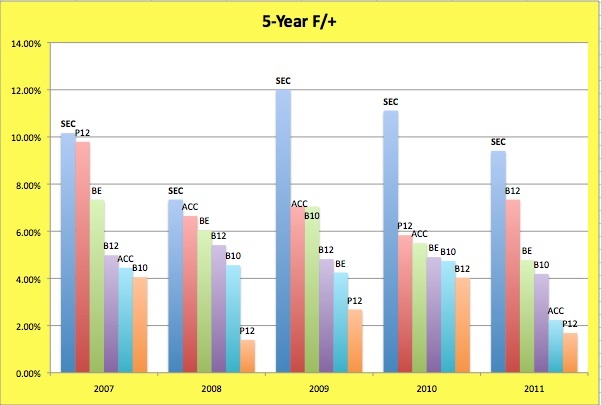 So who deserves the "we're number two!" bragging rights? By the method I've chosen the nod goes to the Big East. You can decide based on what you see here or choose not to care--my personal choice--because it doesn't really matter. So lets focus on the ACC now. Below you can see what intuition probably revealed before reading any of this. Virginia Tech has clearly been the best, winning the conference title and finishing in the top-10 three times. They are also the only ACC team with top-25 finishes in each season. FSU missed a golden opportunity by fielding its best team of the five year period in 2011 while the ACC was at a five year low. Will the downward trend continue in 2012? 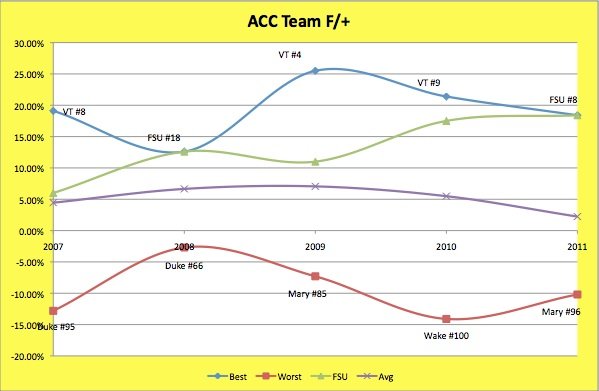 ACC offenses took a big step up last year with incredible surges by Miami (72 to 15), Clemson (84 to 20) and Wake Forest (94 to 47), but failed to produce a top-10 unit for third time in five seasons. The best season, 2009, featured two top-10 offenses (GT and FSU) and a total of six top-25 groups. Huge props to Boston College for improving 25 spots last year, still bad enough for a three-peat at the bottom. On a positive note, 2011 was the only year to not feature a bottom-20 offense. Kudos. 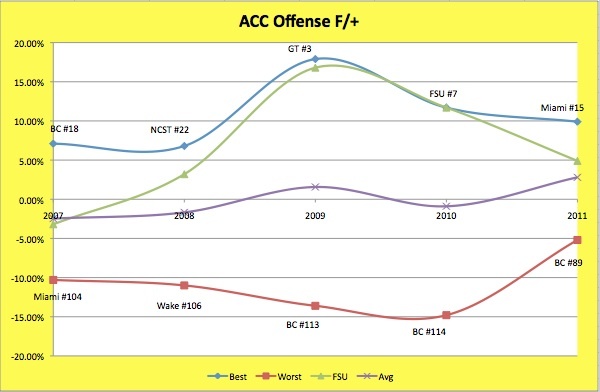 ACC defenses were nothing short of terrific from 2007 to 2010. 2008 was the banner year, featuring three top-10 groups (Wake, BC and Clemson) and an impressive eight top 42 (including Duke!!!). 2009 saw a significant slide thanks to Duke (#92) and FSU (#99), but was still 3rd best overall among BCS conferences. It's difficult to say whether much improvement will occur in 2012 or if 2008/2009 levels are repeatable in the near future. Do not expect BC or Clemson to rebound to top-10 quality or Miami to rebound at all. FSU is likely to repeat as the only top-10 defense next year and it's a safe bet the only other likely top-20 will be Virginia Tech. 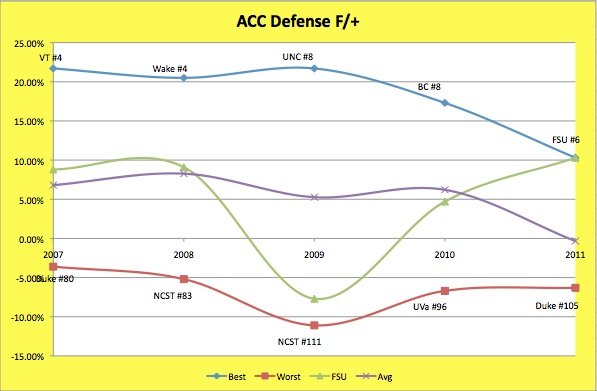 Beamer Ball is a term familiar to most ACC fans and Virginia Tech's success neatly coincides with excellent special teams play as they've produced top-10 special teams units three times and the ACC's top overall team in each of those years. The only anomaly here was winning the ACC in 2008 with the 80th rated special teams performance. FSU has consistently produced excellent special teams; ranking 31st, 6th, 7th, 15th and 2nd over the five year period. Replacing Shawn Powell will be no easy task, but with a wealthy talent pool and the entire roster at his disposal, Eddie Gran should have terrific coverage units again next year. Also, returning Dustin Hopkins and Greg Reid should go a long way in maintaining overall performance. 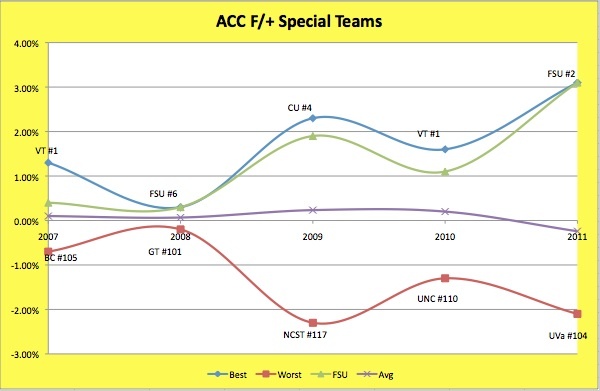 While this evaluation method may not distinguish a clear number two, it certainly reinforces the SEC dominance perception-is-reality theory and that any notion of mid-majors deserving a seat at the big table is ridiculous (especially after losing their three best programs). Perhaps next week we'll use this method to evaluate how much each conference gained or lost from recent realignments.