Share All sharing options for: Rubber match goes to the Noles: FSU wins 62-59

Three seniors on FSU's roster - Luke Loucks, Xavier Gibson and Deividas Dulkys - began their careers by making an ACC Tournament run to the Finals, and now they have a chance to finish what they couldn't do as freshman. For just the 2nd time in program history FSU has a chance at an ACC Title, and they did it with their calling card: defense.

In a 64 possession game, FSU limited Duke to just 59 points (0.92 per possession). This was the first time any ACC team has held Duke below a point per possession all season, and it was Duke's worst offensive output in any game since losing in Tallahassee in January, 2011.

FSU geared their entire gameplan toward taking away the three. The guards picked up pressure 25'+ from the basket, and the bigs hedged hard, essentially abandoning the Duke interior players and daring Duke's offense to go to the pick and roll. And Duke didn't adjust. They kept with the high screens. They kept trying to free shooters. But unlike the last game, the shots didn't fall. Duke made just 5-20 3-point shots.

On offense, FSU did just enough. Michael Snaer played another excellent game and scored 16 points. Bernard James had 13 points and 7 rebounds. And Luke Loucks had 9 points, 6 boards and 4 assists. FSU spread out Duke's defense and took advantage of their weak defending guards. Aside from some sloppy turnovers, it was a really well executed game. FSU routinely got good shots. They just didn't have a good shooting afternoon.

Oh, but Luke Loucks made one when it mattered most. And he did it from his favorite spot on the floor.

Now the Noles advance to play North Carolina in tomorrow's 1pm ACC Championship game. And outside of Tallahassee, not many people wanted this matchup. Certainly not the ACC, and certainly not ESPN. 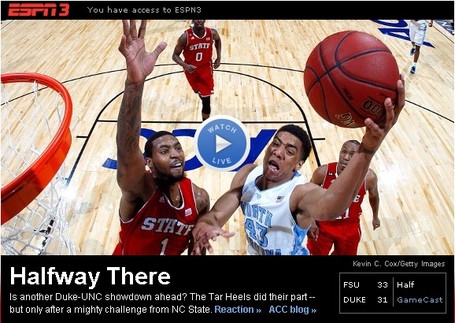 But that's life on Tobacco Road. Tune in tomorrow for the preview and game thread. Go Noles.