I've been a long-time reader of Tomahawk Nation (among other SB Nation sites) but decided it was finally time to make things official and get an account. I've taken quite an interest in the ACC/ESPN negotiations and the potential for conference realignment so I thought I'd do some analysis to try to determine whether FSU and/or Clemson have legitimate reasons to consider a change from the status quo. I also saw an argument on Carolina March yesterday that got a little heated regarding FSU's position in the league (many Carolina fans feel that FSU fans are overvaluing their team's importance), and noticed that neither side really had any analytical basis for their argument. Therefore, I figured it might be a fun topic to explore.

My goal is to use data to assess the relative value of the various ACC teams and to determine whether FSU and/or Clemson are really ‘subsidizing' the Tobacco Road teams as many fans claim. The underlying assumption is that ESPN makes money from advertisers based on total viewership, so the teams with the greatest number of viewers should be valued at a higher level than the teams that don't bring in the same digital footprint.

I'd like to first touch on the process that I used and also be upfront about inherent shortcomings with the data. I'm certainly open to criticism and/or feedback, so if any of you guys have constructive advice to share please feel free. Also, if anyone wants to check the data or use it for other analysis please let me know. With that disclaimer, here is the process that I used:

Other sports were excluded because nearly all of the value from TV contracts is derived from football and basketball. Online programming was excluded simply because I couldn't find enough data to properly assess its valuation... I assume it is generally consistent with the trends in the TV data, though. I also don't think this should materially impact the rankings since ESPN likely relegates the least valuable programming to web-only content. 2011 data was used because it was most readily available (note: this is a shortcoming in the analysis and one that could be corrected if anyone wants to volunteer 3-4 hours of time to help build a bigger dataset)

Look at games played by each team during the season and the various channels/time-slots for each of the games. Estimate the likely TV audience for games where data is not available based on a regression developed based on similar games throughout the year. Again, this is an inherent problem with the available data... I have to use season-long averages since I don't have all of the team-specific figures. I think it's the best guess I can develop with the data that is available. . Sum all of the viewership information and compare across teams

To those who are asking ‘Why would a network pay more for football rights than basketball rights?' here are a few reasons:

By applying some basic math, this assumption yields the following valuation for each viewer of an ACC regular season game for football and basketball

Hopefully that process and the caveats about the data are clear, but I'm happy to answer any questions in the comments section below. I'm also new to posting so the use of bullet points may have made this confusing.

OK - now to the fun stuff. So, is FSU really the most valuable team in the ACC? According to the way that I'm considering a team's value, the answer is a pretty clear ‘Yes'. Here's a quick summary chart along with some key takeaways. I'll also provide additional data later in the post to clarify some of the points. 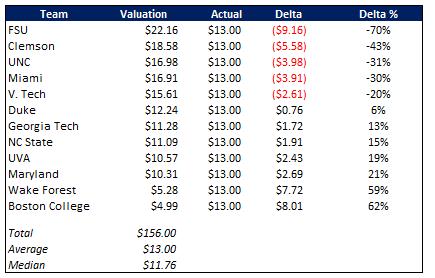 Using viewership as a metric for valuation, it seems plausible that FSU, Clemson, UNC, Miami, and VT are all underpaid relative to their positive impacts on the league. FSU may have a legitimate gripe with the distribution, particularly given the fact that Wake and BC were basically free riders last year. I'm sure this is where people will start asking questions about how I came up with the numbers, so here's a summary of some of the key outputs that you'll probably want to see: 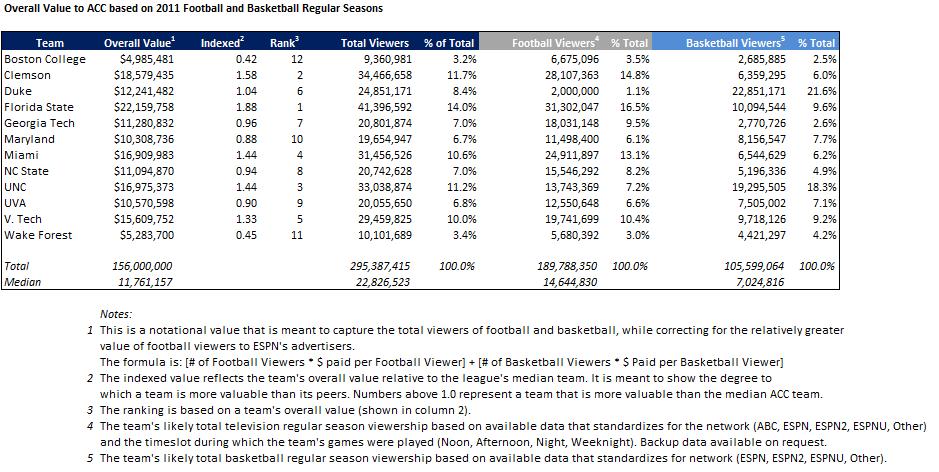 FSU fans should be happy to note that the football team has the highest number of viewers (due largely to the massive 9m+ viewer draw of the Oklahoma game), and that the basketball team also placed third (thanks to upsets of Duke and Carolina on ESPN during the regular season). Again, keep in mind that this excludes post-season play for both sports. This translates into a #1 overall ranking for FSU in terms of projected value, and an indexed value of 1.88 (meaning 1.88 times greater than the median ACC team - you can think of that as being Duke or GT in 2011).

Here is some football-specific data for ACC teams:

Since ABC, ESPN, and ESPN2 are the most valuable networks, it should be pretty evident that the boys in Bristol think that FSU, Clemson, Miami, and VT are the conference's cash cows (at least for Football). For example, UVA only attracted 3 high-profile network games despite its strong season, and those were against the conference's premier teams (@ FSU, @ Miami, @ VT).

You may recall earlier in the post that I mentioned that I used some fairly advanced metrics to determine likely viewership figures for ACC football games. I don't want to overblow the process and make it sound like hardcore econometrics, but I used some basic regressions to estimate viewership numbers based on a game's timeslot and network. Here are some screen shots of the data. I'm happy to provide you with the actual data in Excel format, if you'd like: 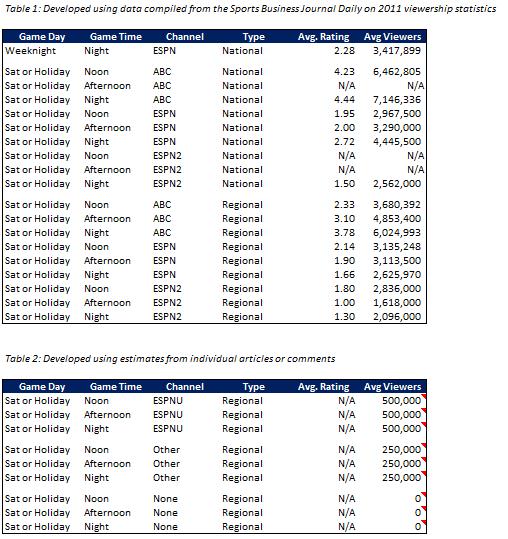 And here's a screen shot of a small part of the full NCAA football dataset for 2011:

Similarly, here is the data that I used to assess each team's ACC basketball viewership:

No surprise here - UNC and Duke dominate the ACC's ESPN basketball programming. In fact, the rest of the ACC really only gets on the mother channel when they're playing one of the two teams located along 15-501. For example, Maryland was on ESPN five times last year (@ Illinois, vs. Duke, vs. UNC, @ Duke, @ UNC). The same holds true for most of the other teams in the ACC. I was personally surprised to see that Virginia Tech had such a strong basketball following.

So, what do you guys think? Is FSU really almost twice as valuable as Duke? Are Clemson and FSU worth almost as much as the bottom half of the ACC combined? Am I making errors in how I'm evaluating the relative rankings?

More broadly, should football really be that much more valuable to advertisers than basketball? Did anyone realize that BC was such a dumpster fire last year? I thought they were supposed to bring the North East market to the ACC.... Guess not. Does that have any larger implications for the market footprint/eyeballs theory of Big 12, ACC, or SEC expansion?

Like I said, if you have any ideas on how I can adjust the data I'd be happy to hear them.