Florida State ends the regular season by hosting one of the hottest teams in the country and probably the best team they have played all year outside of Florida. The North Carolina State Wolfpack are winners of fourteen of their last fifteen games with the only loss coming against Virginia Tech this past Sunday. The Pack are a very balanced team and should provide a real challenge for the Noles who have not been playing great over the past week and a half. To the Seminoles credit their early success in conference has already provided them some breathing room as they have already won the Atlantic Division and with only one win by them or a loss by North Carolina the Noles secure the #1 seed in the conference tournament. 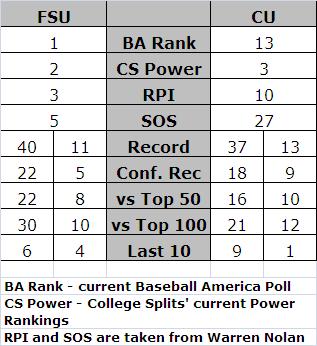 This series starts just three days after the Noles' last one with Clemson ended in which they split a double header. This might actually benefit Florida State because it shuffles the rotation a bit as you will see later this article. Now for some FSU and ACC news:

Inside a look at the offenses and pitching matchups...

The Noles offense had been struggling until they broke out in the last few innings of the first game of the double header against Clemson. That momentum carried over to game two as Florida State scored six runs in the first three innings en route to a 9-5 win. This Seminole team has been led all season by the top five hitters in the lineup but this past weekend the Noles were led by three freshmen who went a combined 12-26 (.461) with 7 runs, 3 RBI and 4 walks in the doubleheader against the Tigers. If the Noles can get production anywhere close to that from Delph, Nogowski and Brizuela for the rest of the year this lineup will stacked from top to bottom.

As mentioned in the opening the Wolfpack is a very balanced team and as you see scores runs at a pretty similar pace to Florida State. They do this with a combination of skills FSU fans should be familiar with; excellent plate discipline, excellent base running and power. NC State does not have the on- base percentage that Florida State does and that is due primarily to the fact they don't walk as much. Like Florida State the Pack has three hitters who are slugging over .500 for the season led by DH Ryan Matthews (.335/.388/.623) who is also riding an eighteen game hit streak. Shortstop Chris Diaz (.380/.413/.522) and C Danny Canela (.339/.443/.522) also pose a serious threat to Nole pitchers and 3B Trea Turner is a mind boggling 51 for 54 in stolen bases.

Worth noting is the success that NC State has on the base paths, stealing bases with a success rate of over 80% is great and can be a huge advantage especially against Florida State as catcher Stephen McGee has had issues all season with throwing out runners. The Wolfpack have swiped 87 bags this season, that's more than five ACC teams have attempted so look for them to run often and with success this weekend.

On paper both of these teams are extremely similar with NC State striking out batters with slightly more frequency than Florida State.

With such a short turnaround between series Mike Martin chose to switch up the rotation. Scott Sitz will throw today and the rest of the starters have yet to be determined. I believe that Leibrandt and Compton will more than likely throw but if they do and how long they throw might be dependent on the results of game one and how UNC fares against Virginia Tech.

Scott Sitz has rebounded under the guidance of Mike Bell this season and has been a solid weekday starter. He is coming off a strong outing last week against Stetson where he went six innings, allowing only five hits while striking out one and walking none. The Noles might be facing the best starter they have seen all year in lefty sensation Carlos Rodon who has all but locked up Freshman of the Year. The numbers he has put up this season are All-American worthy especially playing in a conference such as the ACC. Rodon is a horse having pitched almost 70 innings in nine conference starts, that is more innings pitched than any Florida State pitcher has thrown all year. He is coming off an excellent start where he went 7.1 innings striking out eleven but it will be interesting to see how he looks given he is going on short rest after throwing 133 pitches. It's worth noting that Florida State has had success against the top pitchers in the conference this season defeating Strohman, Farmer and Cooney.

If Leibrandt does go on Friday the Noles hope he looks like he did in the first five innings against Clemson before he ran into a wall in the sixth. Righty Ethan Ogburn has gone back and forth between the bullpen and the rotation with his last start coming against VT last week. In that outing he only lasted 2.2 innings allowing three runs on six hits.

If Compton does go on Saturday the Noles hope he looks much better than he did against Clemson.

In that start he didn't make it through the second inning allowing eight of the twelve batters he faced to reach base although throwing only 51 pitches he should be well rested. Like Ogburn righty Anthony Tzamtis has pitched in a variety of roles and did start last week versus the Hokies. In that outing he threw 87 pitches in four plus innings walking four and allowing two runs on three hits.

As mentioned earlier this State team is probably the best team the Noles have faced in a long time, Virginia might be better but at the time they faced Florida State they were not. It's very hard to predict the outcome of this series as both of these teams appear to be evenly matched. NC State coach Elliot Avent is suspended for the first two games of the series after an incident with an umpire last weekend. It is also difficult to predict because if the Noles wrap up the #1 seed I would imagine they would rest some starters and let some seldom used pitchers get some innings.

Thursday and Friday's games start at 6PM and Saturday will begin at 1PM. None of the games are televised but can be viewing on ESPN3.