The 2011 version of Florida State offense failed to achieve recent standards established under Jimbo Fisher (32nd in '11, 7th in '10, 4th in '09) and we devoted much of our spring football coverage to discussing underlying causes. Today we'll focus on the passing attack, which was driven by an outstanding group of wide receivers.

I've presented FSU stats in a number of methods over the last two years and this is merely another attempt at keeping you entertained. The following charts are broken down by and presented in the most common formation from each personnel grouping the Florida State offense used against its 2011 Division IA opponents. And as with all of our statistics, plays that occurred after games were mathematically decided (aka "garbage time") are not included. Also, please realize that all of Florida State's opponents have much more data on the 'Noles than this, meaning these charts will not give them a competitive advantage over FSU in any way. You can save your emails.

The first passing chart shows the offense in its most common passing formation, but includes all passing plays, from every formation used. I'll try to limit my personal conclusions as to allow our readers an unbiased view, but there are a couple things I'd like to point out from the overall numbers. FSU threw more deep passes than WR and RB screens, combined. And before you draw too many conclusions about a certain quarterback's ability to "read" the middle, at least consider that between seven and nine defenders typically inhabit this area of the field. It is crowded, windows are smaller, many hands have opportunities to invade passing lanes and slight missteps by intended receivers can have drastic consequences. There, now you have a completely unbiased view, free from influence. 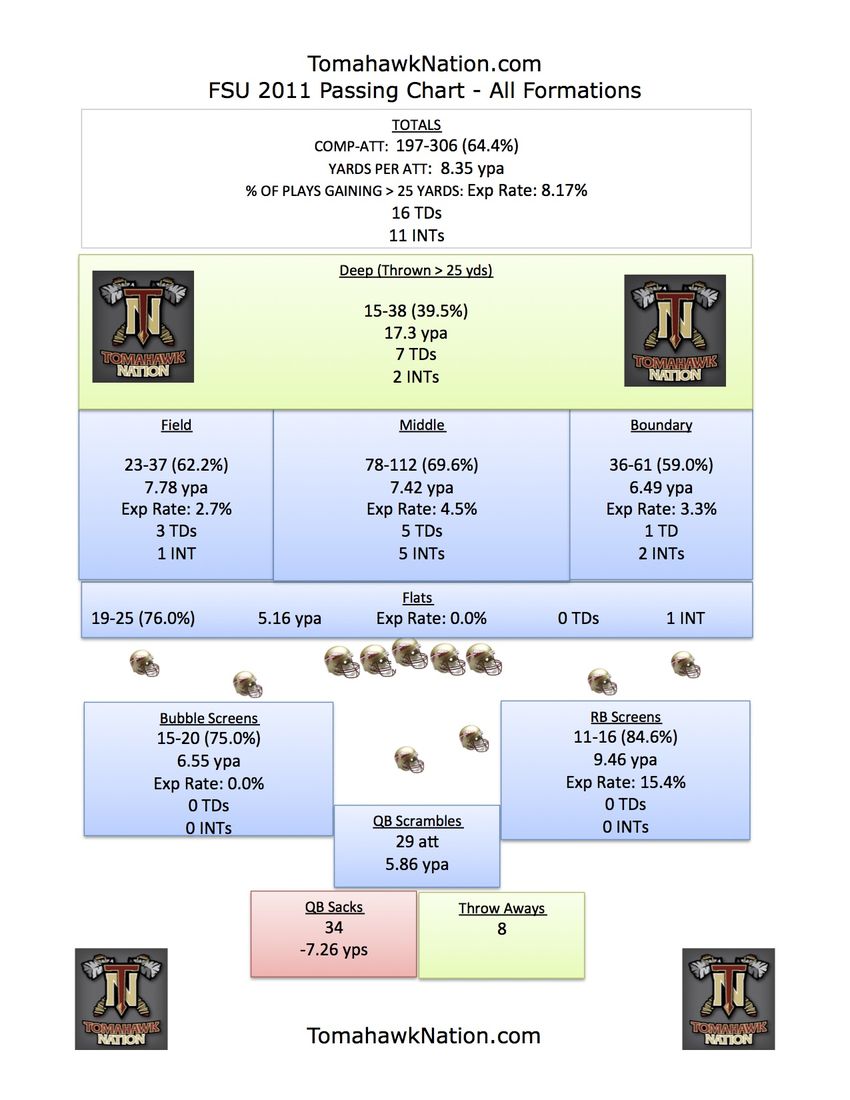 10 Gun (1 RB 0 TE): The first chart shows the most common passing formation, as previously mentioned. Four receivers and no tight ends was quite the productive look and Fisher used it extensively as 37.4% of all passing plays came from this set. FSU did run some out of this set, but 77.8% of the time they passed. Fisher was not shy about using this set in the redzone, either, as 34.2% of all RZ passes came out of this set. 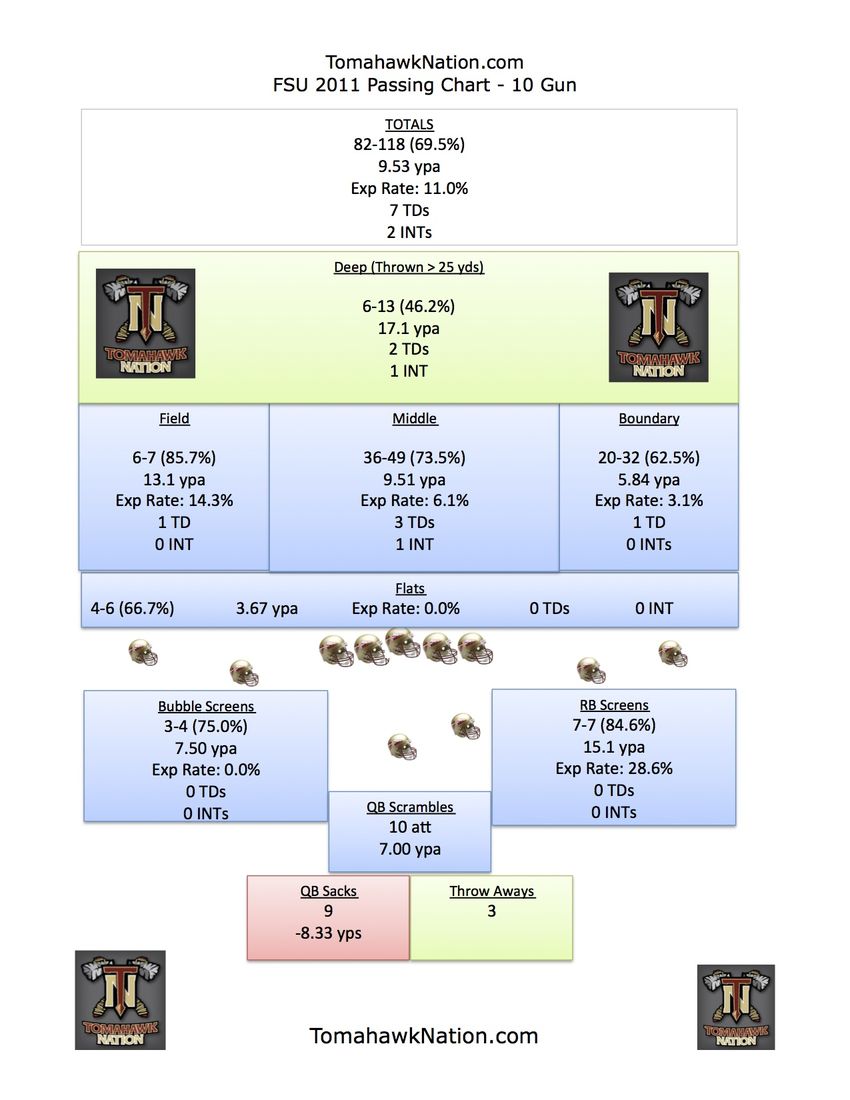 11 Gun (1 RB 1 TE): The second most popular passing formation differs from the above simply by substituting a tight end for a receiver. The production was not bad, but the drop off is quite noticeable, especially throwing over the middle. Even though this is certainly a passing formation, FSU did run the ball on 41.4% of its plays from this set. Also worth noting the sack rate (10.8%) was significantly higher than the top passing set (6.9%). 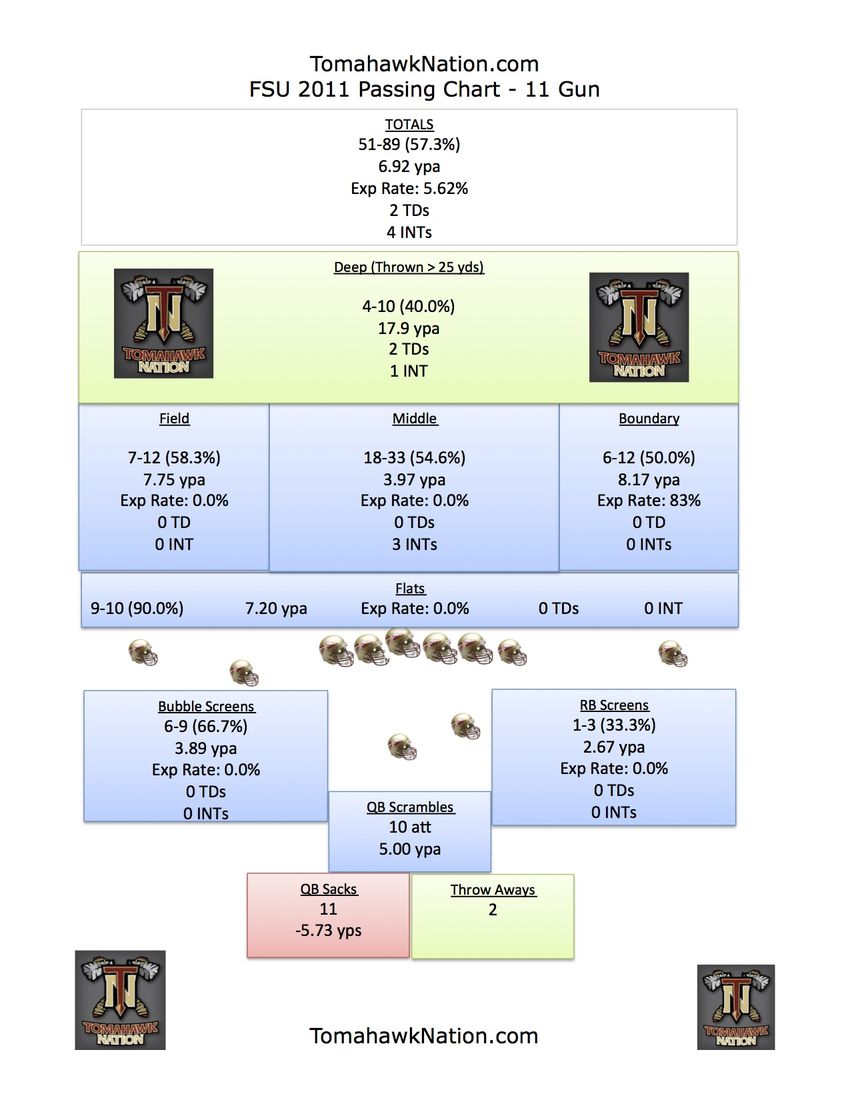 21 I (2 RB 1 TE): A good old standard pro set. Hard to argue against the passing productivity here. The 13.0% sack rate is a little disturbing, though. This is primarily a running formation and FSU only threw 33.8% when using this set. The lone TD was Rodney Smith's ~50 yarder against Duke. With the type of athletes FSU has at receiver, I love the bubble screen out of this set as it always creates a true one-on-one in the open. 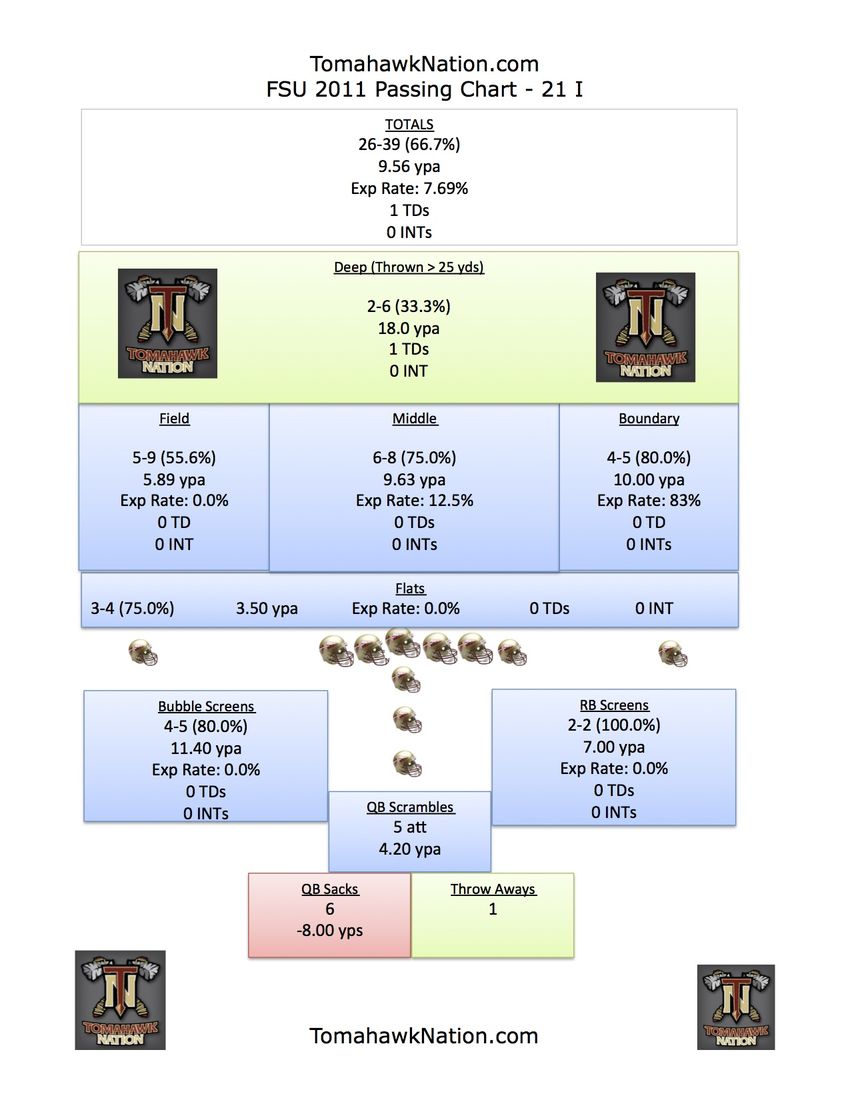 20 Gun (2 RB 0 TE) The next chart shows an interesting set which FSU did not use on any play I charted in 2010. So, let's just call it a new wrinkle. Even though its use was limited it was a productive look. You might think three WRs and no TEs would be a passing look, but only one-third of these looks resulted in passes. 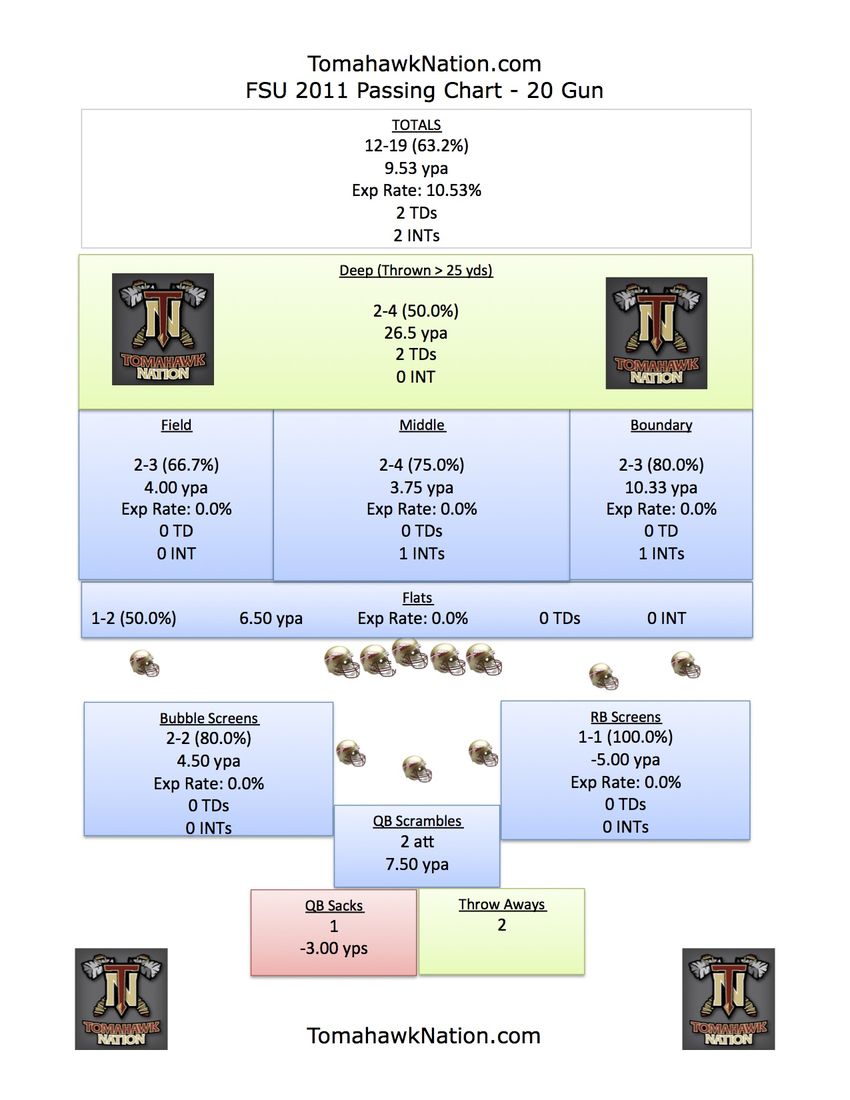 12 (1 RB 2 TE): What does FSU do with this two TE running set? Throw the ball, naturally. It got limited use--those with statistical sample set envy, relax--but FSU threw the ball 16 of the 23 occasions on which this look was presented. And as you can see, they threw it somewhat equally everywhere but underneath. 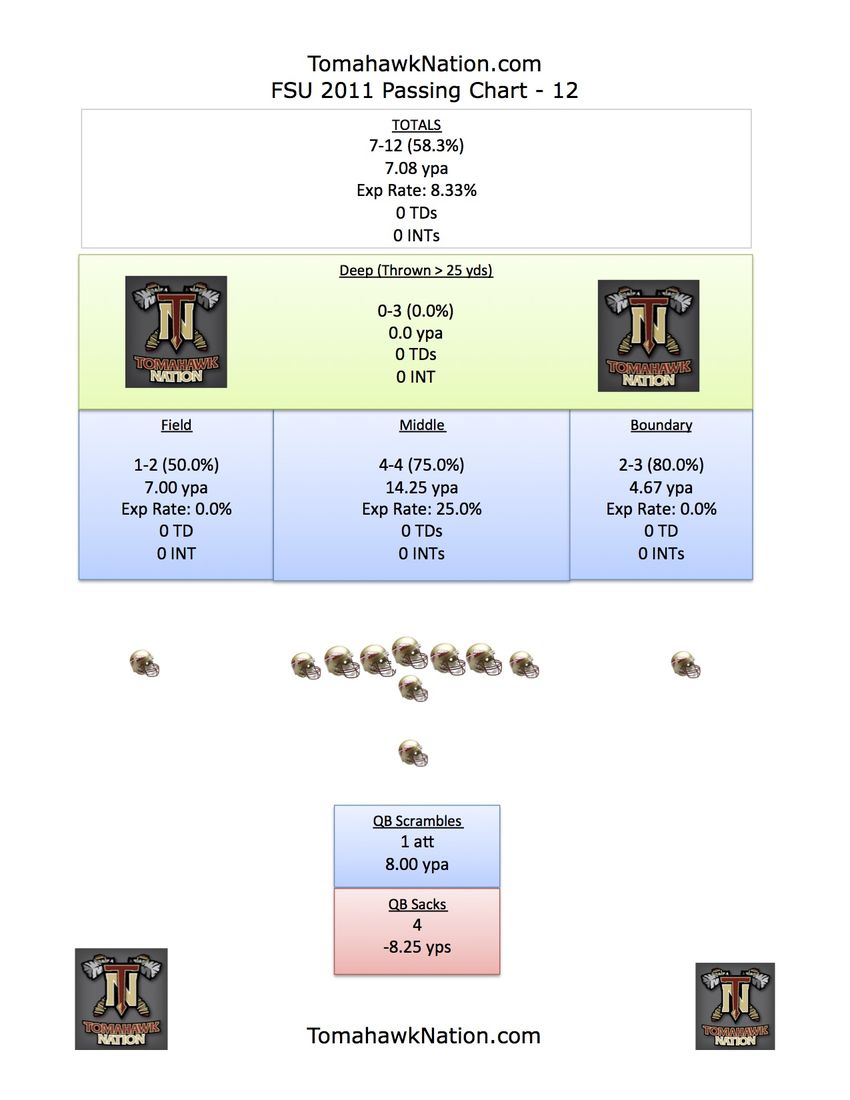 02 Gun (0 RB 2 TE) The first time I spotted this formation was from the stands against Oklahoma and my initial thought was; this...is what Fisher saved for this game? Admittedly, I missed the next couple of plays pondering and convincing the guy in front of me of the ground breaking nature unfolding. Then it dawned on me it was a genius version of the wildcat, with a legitimate option to throw....and throw they did, 70.6% of the time. 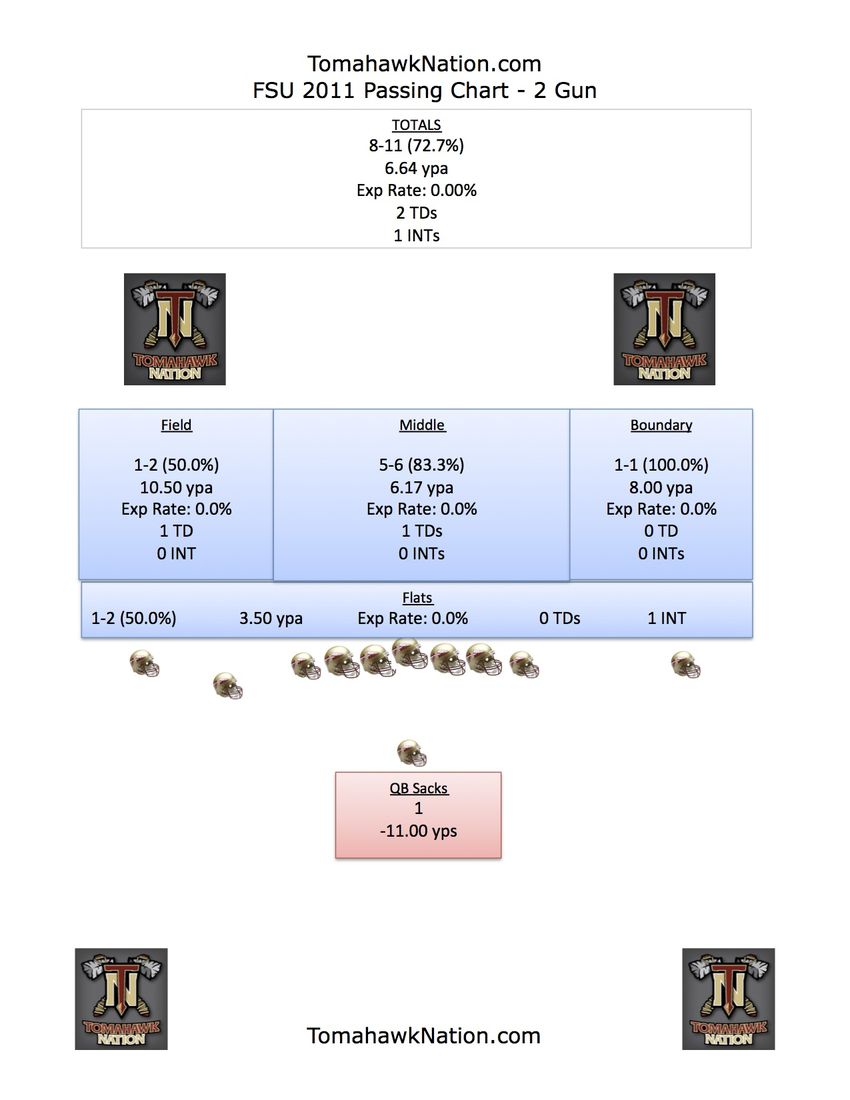 0 Gun: Five wide, the ultimate passing set. I have to imagine this would have been used more frequently if not for the physical ailments with which the offense was struck for a good portion of the season. The majority of passes thrown from this look were underneath to a slot receiver. 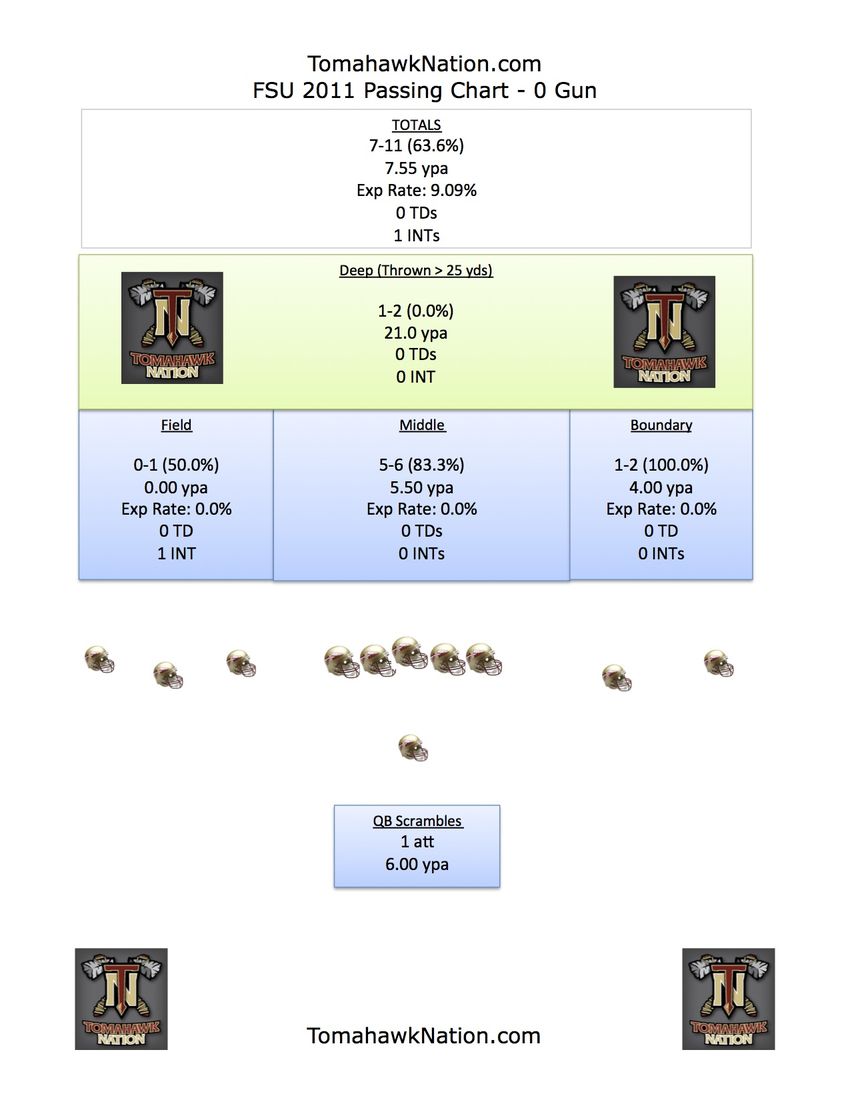 22 I (2 RB 2 TE): The lone connection from this obvious running set went for 14 yards from Clint Trickett to Rodney Smith in the first quarter at Clemson. 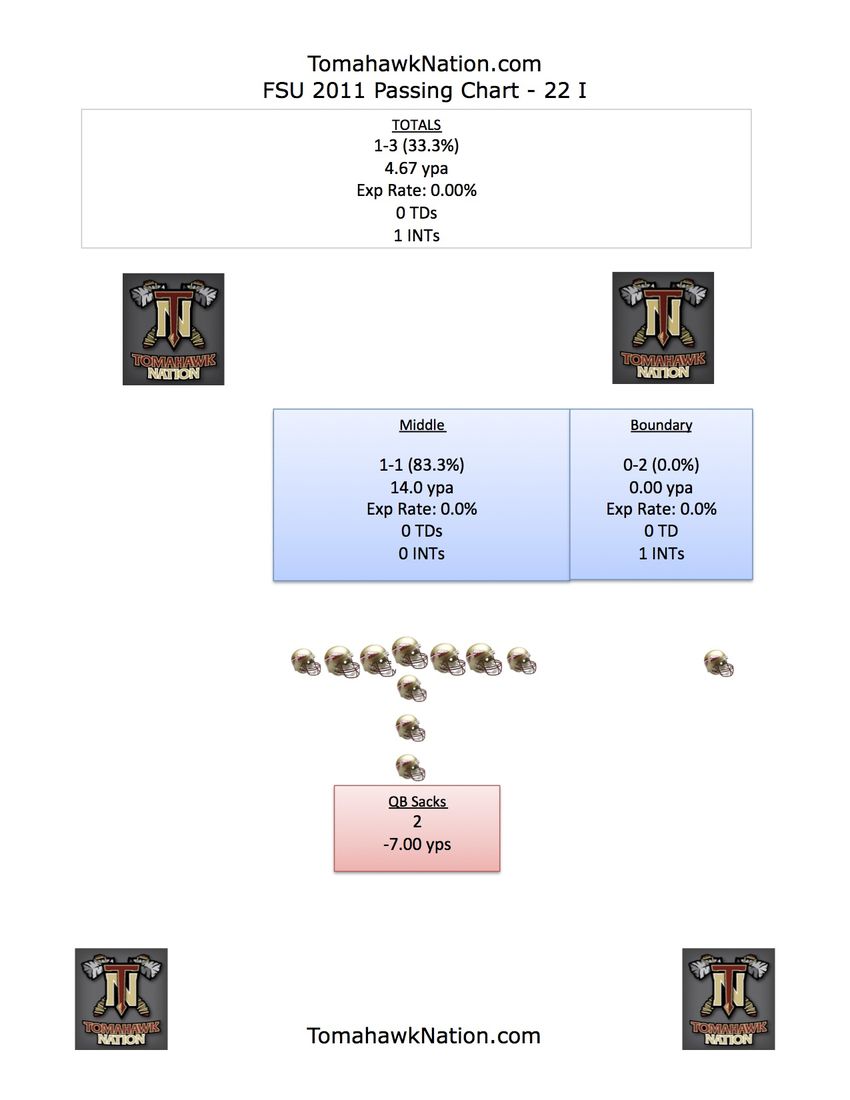 23 (2 RB 3 TE)The Werner special set was introduced last year in response to short yardage running problems. Consider the lone pass a going away present from Fisher to his favorite TE on senior night. 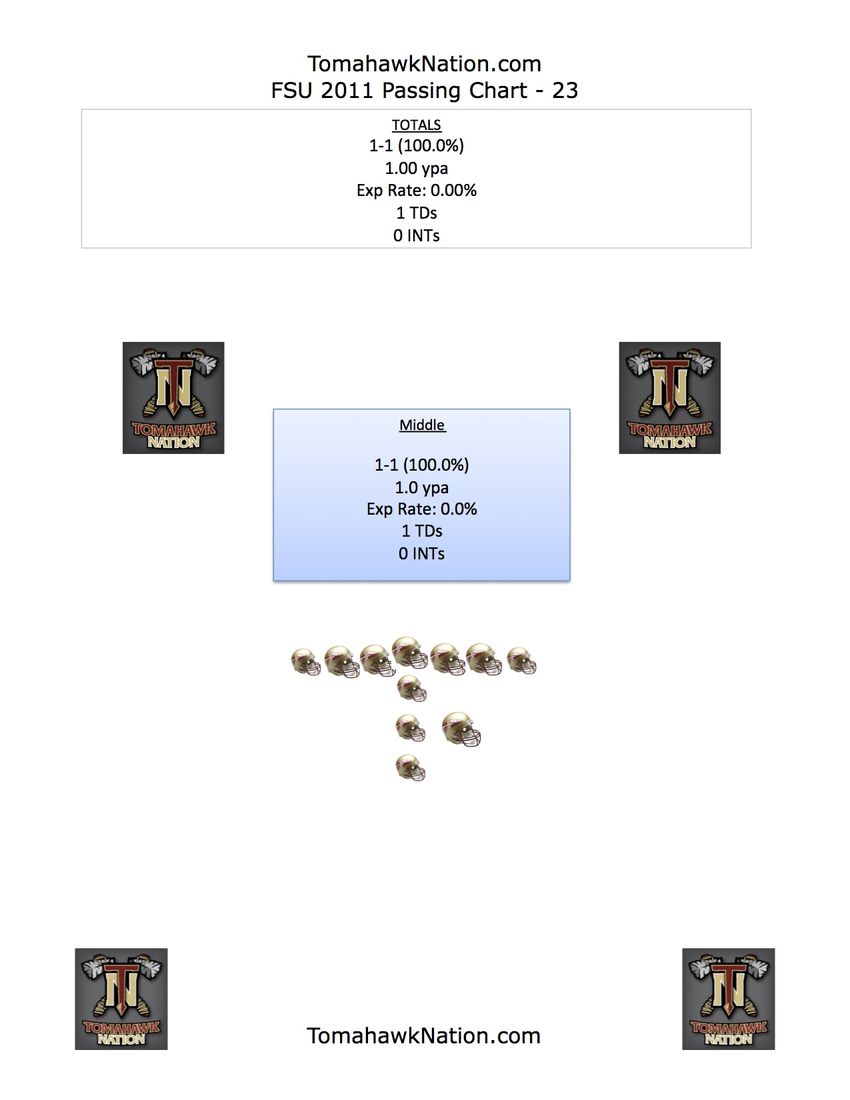 There's a lot of data here. What do you take away from these charts? Let's discuss this more in the comment section.