UPDATE: Georgia Tech 10-run ruled Virginia today beating them 17-5 in 7 innings. This eliminated Florida State from the championship game. The ACC looks foolish in my opinion for instituting this type of format, the #1 seed lost the only game it played in by 1 run to one of the best pitchers in the conference and now has 2 meaningless games to play.

For those who are not aware the Noles lost a close game 5-4 at the hands of the Yellow Jackets Wednesday afternoon. Florida State was down early 5-0 in part to a poor outing from Scott Sitz and an inexplicable appearance by Brian Busch who allowed a two-run homer to the only batter he faced. The Seminoles battled back with three runs in the fifth inning off of ace Buck Farmer. They would add another run in the ninth when James Ramsey hit a solo homerun with two outs but the game would end with the next batter as Boyd flew out. I won't defend the decision to pitch Busch because his career at Florida State should be over but fans can't say the Noles would have one if he hadn't pitched, baseball doesn't work that way. Florida State did have chances in this game but the fact that we lost shouldn't have been a surprise. The Yellow Jackets are a better team with Buck Farmer pitching than when the Seminoles start Scott Sitz, plain and simple which is why this game shouldn't have been considered an upset.

If you think the way Florida State lost was bad be glad you're not a Clemson fan, the Tigers wasted an excellent start from Daniel Gosset in a 3-2 loss. Clemson was winning 2-1 going into the bottom of the eighth and easily recorded the first two outs when the wheels came off. A single, hit by pitch and another single loaded the bases for the Cavs and the Tigers gave away the game as they hit the next batter and walked the following allowing two runs. A double played ended in the ninth inning as Clemson joined the Noles in a do or die situation.

If either team is to have any chance of advancing they must win today's game. Florida State has much more on the line than Clemson because their opportunity to be the #1 overall seed is probably dependent on them winning at least two games in this tournament.

Inside we will preview the game and see how the Seminoles matchup... 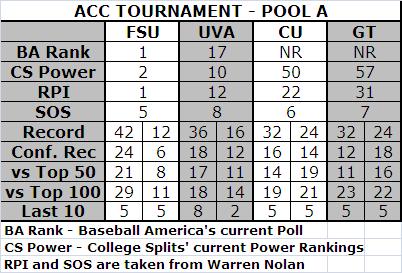 Despite losing the series against Clemson the Noles bats fared pretty well. Overall they had a slash of .330/.437/.406 and went 2 for 2 in stolen bases striking out 13 times while walking 18 times. If you recall this was the series where FSU was led by three freshmen who went a combined 12-26 (.461) with 7 runs, 3 RBI and 4 walks in the doubleheader against the Tigers. If Delph, Nogowski and Brizuela are in today's lineup and can produce like that the Noles should be in good shape.

The Tiger offense pounded Florida State a couple weeks ago hitting .270 with a tremendous .490 slugging percentage. Four different Clemson players hit homeruns and the Tigers were also successful on the base paths going 7 for 8 on the weekend.

There is no doubt that Florida State has the better offense than Clemson does, they get on base considerably more frequent and hit for more power which subsequently resulted them in scoring a run and a half more than Clemson did this year. As we saw in the last series bats can cold the first 5 innings and heat up in the last four.

As you can see neither staff was effective in the series but what gave Clemson the advantage and series win was their ability to limit extra base hits. While Clemson allowed more hits to Seminole batters only 20% went for extra bases while Nole pitchers allowed a freakish 59% of hits to go for extra bases.

This is a rematch of the first game between these two teams, Leibrandt is the normal Friday starter for the Noles and Leone was bumped up because Kevin Brady the normal Friday guy was out with an injury. The freshman lefty for the Noles was not all that effective that day but as you can determine it was pretty clear that he is the better pitcher and has performed that way over the course of the season. Dominic Leone did have a solid start against Florida State allowing only two runs as the Tigers went on to a 7-2 victory. In his last start against Wake Forest Leone took the loss but didn't pitch all that poorly allowing four earned runs on six hits over seven innings.

Florida State went to their bullpen early in game one but with the off day should be well rested meaning anyone is available to throw. The Clemson bullpen used three pitchers to combine for only 1.1 innings of relief and I would imagine all of them would be able to go as well. Something to watch for is Clemson's best pitcher Kevin Brady who has been injured for the past month, he is available for a couple innings of relief if necessary.

Below are the multiple ways fans can follow each game of the conference tournament and there is also a schedule of each game and what local channel it can be found on. 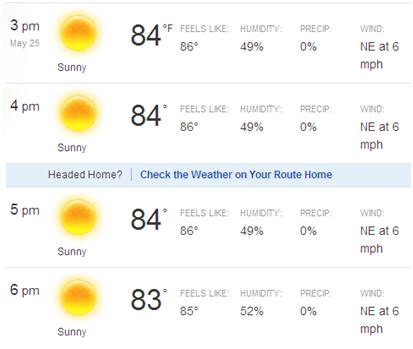 In a single game with teams as talented as Florida State and Clemson anything can happen. The obvious advantage goes with the Seminoles and their starting pitcher. If Clemson plays as well as they did yesterday and in the previous series versus the Noles they have a great chance of winning. See everyone back at 3PM.