Video chalkboard: To hedge or not to hedge?

Share All sharing options for: Video chalkboard: To hedge or not to hedge?

Modern basketball is a game defined by the ball screen. Screens have always existed in basketball, but their use and function have ebbed and flowed as the game evolved. The current state of the game has just about every team utilizing ball screens on the vast majority of their half court sets.

When Bob Knight and Dean Smith were at the top of their games, screens heavily influenced offenses, though they were mostly used to free up cutters. Now they’re used to get the ballhandler into space where numerous options unfold depending on how the defense chooses to defend. Chuck Daly held a series of coaching workshops where he lectured on nine different ways to defend the ball screen. At the end of the hour and half lecture he’d conclude by saying that none of those nine defenses work.

Which is why the ball screen dominates college basketball.

From a fan’s perspective, what this means is that the first thing you should be watching for in any game is how teams are defending the ball screen. And this is where Leonard Hamilton coached teams are so fun to watch. Hamilton is arguably the best defensive mind in the game. And it all begins with defending ball screens.

This post isn’t intended to be an exhaustive treatise on defending ball screens. Rather, it should give you the building blocks to be able to diagnose what a defense is doing.

To hedge or not to hedge, that is the question.

Before I cut to the video, there might be readers who don’t know what a hedge is. 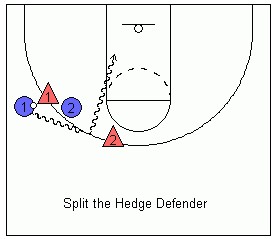 Here blue No. 1 has the ball, and is receiving a screen from blue No. 2. In a switching man-to-man the defenders would simply swap responsibilities, but that might lead to a mismatch (a point guard be defended by a center, for example). So to avoid that mismatch the defenses hedges. In this illustration defender No. 2 will trap the ballhandler as he comes around the screen, and delay him just long enough for the original defender to get around the screen and back into position.

A short video showing what can happen if you hedge on a shooter like Kenny Kadji.