Recipe for a College World Series Title: Does FSU Have What it Takes?

Share All sharing options for: Recipe for a College World Series Title: Does FSU Have What it Takes? 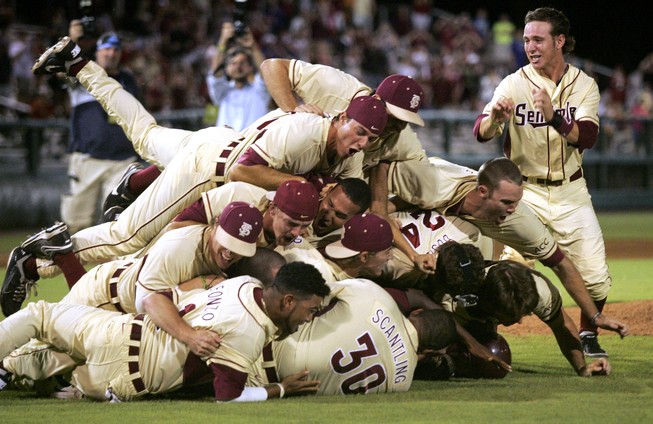 So what does it take to win a College World Series title? Nobody wants to know the answer to that question more than Florida State fans as the baseball team has been to Omaha twenty times and each time returned without a ring.

I'm sure a lot of readers like myself enjoy playing fantasy sports and as you can imagine I live for fantasy baseball. Over the past ten plus years I have played in various leagues and various different formats with the two most popular types being head-to-head competition and rotisserie style scoring. In this article we will take a look at collegiate statistics amongst the top level teams in the country, apply a ranking to them and see how it relates to their success.

The first thing we need to do is decide what teams to use in our league, there are currently 291 teams and to include them all would be silly because there is a lot of really poor teams. Think of it in terms of football, there are some good teams outside of the BCS schools but when it comes down to it the cream of the crop comes from those power conferences. In order to do that lets turn towards the guys at College Splits and their "Elite" conferences.

"Elite" conferences are the ACC, SEC, Pac-10, WCC, Big 12, Big East, Big West, and Conference USA.  In general, the 82 schools that play in these conferences are more likely to be prospect-packed and  face a higher level of competition than other Division I programs. For more on relative conference  strength, click here

From time to time a team outside of these conference has great success and plays its way into the CWS and this year there are two teams, Stony Brook from the America East and Kent State from the Mid-American Conference. In the three previous years there were only two teams outside of an elite conference to make it to be a national seed or make it to the college world series, TCU and Coastal Carolina in 2010.

So now that the teams are set lets look at the what statistical measures we are going to use. Traditional fantasy sports uses counting numbers like runs, homeruns and stolen bases as well as percentages like batting average and earned run average but there are weaknesses in those stats. Counting stats (RBI, HR, runs scored) aren't very informative because they're highly context dependent and don't account for how many outs a player is using up. Stats like batting average aren't really useful unless viewed in tandem with OBP, SLG and plate appearances. Now there are many new and wonderful stats that individuals have come up with that measure hitting and pitching in a much more exact manner but unfortunately collegiate stats are very hard to come by. For this exercise we will use offensive stats known as RSco%, OPS and R/G and for pitching we will use WHIP, K/9 and K:BB.

RSco% - measures how effective a team is at plating base runners in a formula that I have simplified. Take all of the runners on base that scored and divide that by the total runners on base. While I dislike the use of clutch because it is so difficult to define this comes close to how a team is at being clutch with runners on base. Statistically it looks like (R - HR)/(H + BB + HBP - HR)

OPS - (OBP + SLG) - OBP is how often a player reached base via hit, walk or hit by pitch; among traditional offensive statistics, it's the most important. SLG measures a player's power, albeit not perfectly. So while not the greatest statistic it does a good job with limited information and does have a stronger correlation to scoring runs than any other stat alone.

R/G - Runs per Game, given the teams that are included in the elite conferences and their similar level of competition I feel confident that using this stats gives you a good idea of how proficient an offense. This is especially important in the last two years as the new bats have allowed better offense teams to continue to be high run scoring teams. The one flaw with this is that it doesn't take into consider the ballpark that a team plays in.

K/9 - The average of how many batters a pitcher strikes out per 9 innings pitched, which is a perfectly suitable way to evaluate a player's ability to strike batters out. Keeping batters from putting the ball in play is a very effective way to keeping runners from getting on base however this stat doesn't take into account how many walks a pitcher allows.

K:BB - Since K/9 doesn't take into account walks we will use strikeout to walk ratio. The sign of a good pitching staff is their ability to keep the ball from being put into play and keeping runners of base especially via the walk. Another useful stat but like any stat it does have limitations, if a staff has two groundball pitchers that eats up a lot of innings their effectiveness will not be reflected in their strikeout to walk ratio.

Lastly we must assign a score to each team depending on where they rank amongst their competitors. I took the end of year statistics from each team out of the elite conferences as well as the outliers for 2010 and 2012 and ranked them from best to worst in each category and then assigned a ranking. The lower the number the higher they were ranked. Each ranking in each category was then added up giving a team a total rotisserie score, which is how they are shown below.

Lets take a look at how the best teams fared at season's end and what conclusions we can draw from them.

So before looking at this year's finalist and a closer look at where Florida State ranks lets summarize some finding from the past three years.

So its no surprise that you need excellent pitching to win a college world series, a great offense helps but that is no guarantee. Lets how this years Florida State team compares to those of the past.

It doesn't look like this team would fare any better in Omaha than any previous team. The Noles continue to have a extremely productive offense that is ranked 5th amongst all teams. But the pitching staff that is young, inexperienced and while not elite isn't terrible with a pitching ranked 27th. This next graphic is further proof that winning a college world series might not be in the cards for the Seminoles this season. 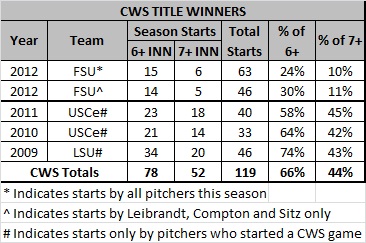 Keep in mind it takes five wins in Omaha to claim a title and you need to either have extremely strong starters who can give you six or seven good innings or an extremely deep bullpen. The South Carolina and LSU teams of the past three years have had extremely good pitching during the regular season and they had starters that could go out and be counted to give them a good amount of innings. The starters for Florida State have yet to prove that they can do that this season. Certain teams get hot at the right time so maybe the pitching is getting ready to turn a corner, lets see how the staff has performed over the past month.

Overall they have put up some really good numbers but there seems to be a drastic difference in pitching away as opposed to pitching at home. 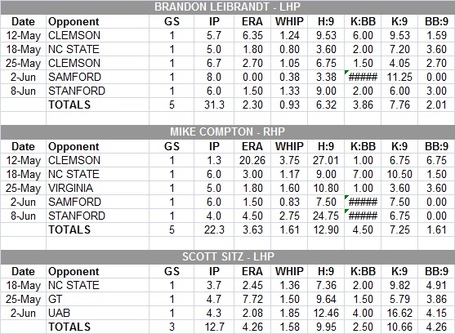 So maybe the starters for the Noles are not going to be able to carry this team through Omaha but maybe the bullpen can step up. Lets see how they have looked in the last month.

At first glance it doesn't seem like the bullpen as a whole has been all that effective over the past month. It is no secret that the pen is heavily reliant on Gage Smith and Robert Benincasa as they have pitched almost 40% of relief innings the past month and unfortunately the long season might be starting to wear on them. What is even more concerning is the home and away splits, the bullpen has been down right terrible on the road and while TD Ameritrade is somewhat of a pitcher's park the level of competition will be the best they have seen all season. 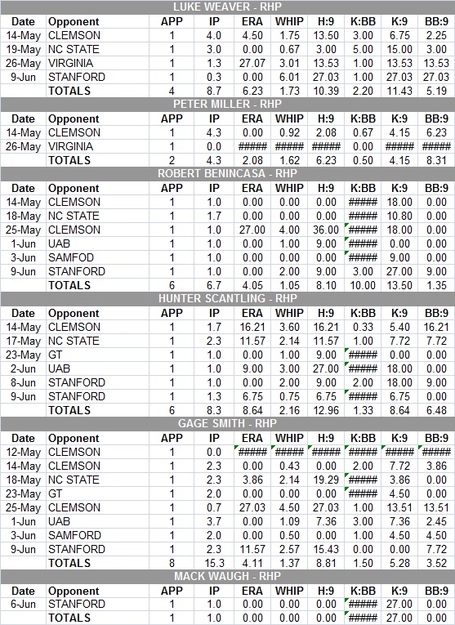 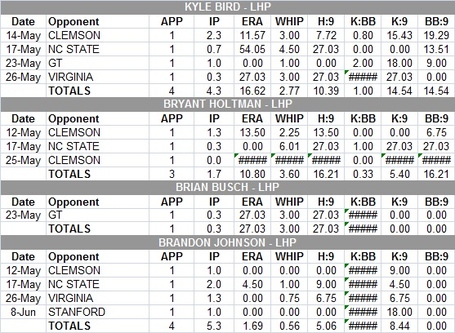 First off Tomahawk Nation prides itself of analyzing the best statistics available in a comprehensive and logical way, this article does not fall into that category. This was an experimental piece that was written to try and compare something abstract with something more concrete.

The Florida State Seminoles have had a tremendous season and no matter how they do in Omaha this has been a great team that has given us fans a great season. Now looking at how previous College World Series teams were composed it is pretty safe to say that the Noles are not built the same way. That is not to say they can't have some success, as we saw last week this offense is phenomenal and anything can happen, but carrying this team to a title might be a little too much for them. Hope you enjoyed the article and come back tomorrow for a complete preview of Friday's matchup between Florida State and Arizona.