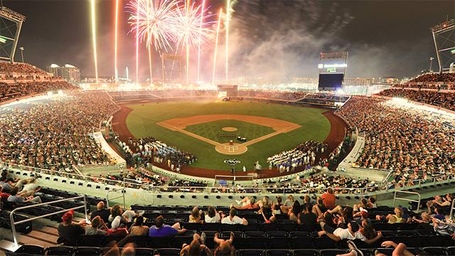 There might not be a hotter team right now than Florida State as they destroyed a very good Stanford team by scoring 35 runs in two games. Arizona defeated St. John in a little more tightly contested contest one involving an extra inning comeback. Both of these teams are built very similarly as they rely on the offense to score lots of runs and just look for solid outings from their pitchers.

Inside a preview of each team...

It's a really good team that is really hot. And they just play really well in that ballpark. You kind of get suckered into playing up and then it's all triples. And ground balls are rockets. They play it about as good as anybody. They come out of the box hard, they play hard, they're very aggressive on the bases, and they're pretty physical. They look to take the extra base right out of the box. Those guys don't try to hit homers. They backspin homers, but they're trying to use the gaps, hit doubles and triples, hard contact through the middle of the diamond. They can really chop that ball and use the hard dirt-they'll chop it as high as the roof of my house. And they get out of the box hard because they get rewarded for it with infield hits. They can cover some ground, and in that yard, you have to really, really be able to cover ground in the outfield. You'd better cover some ground, because otherwise it will be triple after triple after triple. But you see what they did in their regional. They just kind of destroyed the field. It was pretty impressive.

Arizona moved into a new stadium this season and they took advantage of the generous dimensions. The Hi Corbett dimensions are 360 feet down the, but the alleys are huge, 410 in left-center and 405 in right center. The Wildcats hit only 8 homeruns at home this season but had 30 triples which is more than 285 teams had. While not as prolific away from home the Arizona offense is still extremely good, they are not a team that walks a whole lot but since they don't necessarily swing for the fences they don't strike out either 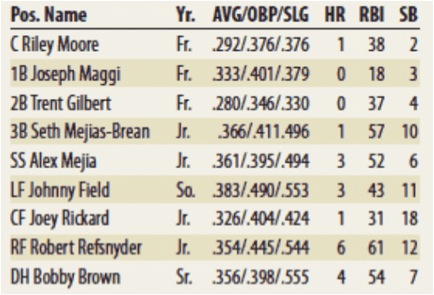 "Position player-wise, I thought they're great. They may be the best position player group in the country, the way they play together. They're all physical, all can run, and right now they're all swinging it. That's the exciting thing about them. Their shortstop, Mejia, is an absolute stud. You would think he and Mejias-Brean have played together their entire life. I've never seen two infielders move and talk and communicate the whole game like those guys do. They really play aggressive, just two really good players. Those three dudes in the outfield, they're really good college players too. They all run, they all defend, they all throw. They're just all good players, not the one-dimensional kind of guy. They all kind of play the game the same way. The first five guys are all righthanded, good bodies and they all run. Mejia is their three-hole hitter, and he has their most sac bunts. There's not a real big mule four-hole hitter, but it feels like you're facing five three-holes. Field's leading their team in hitting in the two-hole. It's a nice lineup the way it works. Some of their younger guys are at the bottom, but they're playing well too. The sixth hitter, Brown the DH, a lefthanded hitter, he's good too. The freshman catcher Riley Moore, then Gilbert and they platoon Maggi and Brandon Dixon. I think Maggi's a little better defensively. They flip them depending on the matchups.

Much like Stanford's lineup Arizona is really good all the way through the lineup. The offense is loaded with quality players that have a chance at the next level as four of their starters were drafted in the first ten rounds. SS Alex Mejia went in the 4th round, RF Robert Refsnyder went in the 5th round, while 3B Mejias-Brown and OF Joey Rickard went in the 8th and 9th round respectively.

"They have a system. If you talk to pro guys in the fall when they see Florida State, they say, 'They're not going to be very good this year,' and every year they win 50 games. That's the way they coach, and the kids buy into the system. It's a typical Florida State team: some decent talent, a good college player in Ramsey, but it's not like they're Stanford or Florida, having seven guys go off the board in the top five rounds. But that's a credit to their coaching staff."

Florida State's approach at the plate gives pitchers fits as we've seen recently, the disciplined approach wears down a pitcher and the first mistake they make the Seminoles capitalize. This offense has defeated some of the best pitchers in the country this season and there is no reason to think that success cant be continued. 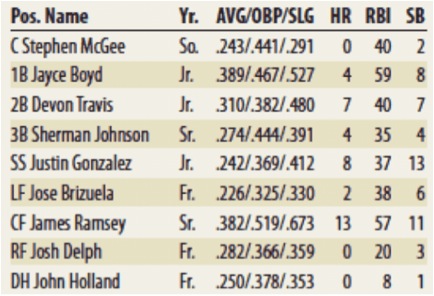 "They're a solid club that plays with a lot of swagger, and that comes from playing in that program and that coaching staff, and James Ramsey. He's an unbelievable person and leader, they all look up to him. He plays the game the right way, and they just feed off it. Ramsey's a plus defender in the outfield, probably an average thrower. He has unbelievable hand-eye coordination, he can get fooled but still gets the barrel on the ball. The one thing that will shock you is the dude can really fly. I got him a couple times 3.97 (seconds down the line to first base) on swings. The way his swing is, if he hits the ball on the ground, he's always kind of jail-breaking, but that's the way he swings all the time. As soon as you hang him a breaking ball, he hits the ball over that green monster down there at Florida State. He's just a tremendous player, and obviously he made the right decision to come back to school.

"Sherman Johnson is what they need for leadoff, a patient guy, will take a strike, try to get on. Travis is good, I think you can beat him with a fastball-he has a little bit of slider bat speed, but if he runs into one he can hit it into the gap. Gonzalez has some juice, he's scary because he hits in the bottom of the order and he can jump up on you. Boyd's power is to the opposite field, he's got those long arms and the leverage, he'll go the other way. You've got to get in there, because he wants to get extended. He wants you to throw him a breaking ball or a fastball away. He doesn't want any part of the ball in.

"McGee is solid, he's a solid player, but a below-average thrower. Their pitchers do a great job of controlling the running game, but if you can run and not get picked off, you can steal bags all day. If they match up with a team that can really run and get guys on, he's going to get exposed. I really like Delph; I think he's really going to hit over his career. He's an average player otherwise but I think he'll hit. Brizuela has some athleticism and spark to him; I think he'll be good too.

The Noles had a few players drafted as well most notably was James Ramsey in the first round to the Cardinals and Jayce Boyd to the Mets in the sixth. Devon Travis, Sherman Johnson and Justin Gonzalez were taken in the 13th round or later. There might not be a better lineup 1-4 in the country but after that is where the Noles might be vulnerable.

These two pitching staffs are very similar, they have an excellent Friday guy and a vulnerable bullpen.

"In the bullpen, Troupe attacks the strike zone, pretty good fastball, 88-91, and has the slider and the change. He kind of throws at times uphill where he gets underneath the ball, but it's effective for him because he's down enough and the ball almost rises up and is on a hitter. The lefty (Tyler) Crawford was 83-86, and he struggled with command. (Righty Tyler) Hale was 88-91 with a curveball, attacked the zone. But if there's one area they're vulnerable, that's it. If you can get their starter out early and get into their bullpen, you've got a pretty good shot.

"After that, the other guys are just average until you get to Benincasa. I think he's really, really good. He's 89-92 with a plus breaking ball, and he can throw the breaking ball anytime he wants for a strike, and command of the breaking ball is really, really good. Gage Smith, the sidearmer, is good against righties. (Lefthander Brian) Busch and (righty Hunter) Scantling are serviceable. The one thing they do, and they've always done it at FSU, their guys out of the bullpen can throw strikes with the slider anytime they want. They'll bring Scanting in and it's slider, slider, slider, slider. Then Busch will come in and throw fastballs from a sidearm angle, and throw the breaking ball over the top. They're serviceable, not great, but got enough combinations.

The ideal situation for the Noles and I am sure for Arizona too is get seven strong out of their starter and then turn it over to their best bullpen guys.

"Heyer's a stud, with pitchability. The stuff is good, but the pitchability is great. You can see why he's done what he's done this year. They are really good defensively, so they take a lot of hits away. What happens is, he probably gives up a little bit of contact here and there, but they make up for it. It's 88-90 with a good slider, maybe touches some 92s, but it's not like overbearing stuff, just really knows how to pitch.

After being selected in the 4th round Heyer started against St. Johns where he allowed 17 hits in 9.1 innings pitched. While only one of those 17 hits went for extra bases I would have to imagine a repeat outing like that versus the Noles would yield more than just six runs.

They (coaches) try to get five or six innings from the starters, then bam, to the matchup bullpen. Leibrandt can pitch, 85-87, good changeup, really good pickoff move, so he does a good job controlling runners.

That's probably why those freshmen on the mound, Leibrandt and Compton, they're like, 'Screw it, I'll just throw it over the plate, these guys are going to hit it on the ground, and my guys are going to take care of it.'

Leibrandt has looked really good so far in the post season, he has allowed only one earned run on nine hits in 14 innings pitched with a phenomenal 14 strikeouts to only 2 walks. The freshman lefty is very mature and composed for his age so hopefully for the Seminoles he will be able to handle pitching on the big stage. 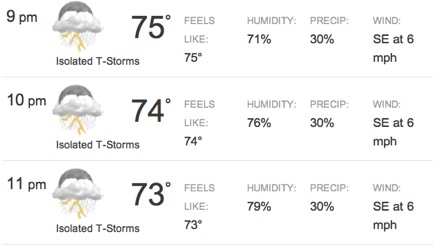 Regardless of what happens from here on out the Noles have had a tremendous season and given fans more then they ever could have asked for. For that they are being rewarded with an amazing opportunity to be the first team in Florida State history to win a College World Series title. The Seminoles really do match up well on their side of the bracket as all teams are very similar. They can all hit and they all have one really good starter which is why winning game one is so vital. It would be really tough for any of the teams to win the bracket after a loss due to the lack of pitching depth.

The first game between UCLA and Stony Brook starts at 5PM and we hope to see everyone back here tonight at 9PM for the game thread.