The Seminoles defeated Samford last night and the Cardinal defeated Pepperdine setting up a premier Super Regional matchup. Inside a quick look at the Trees and we will also talk some MLB draft which starts this evening. 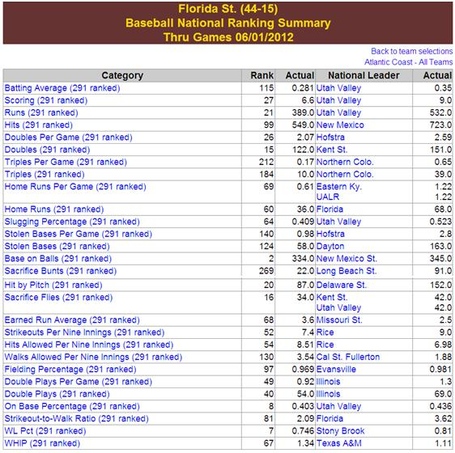 The Seminoles finished the season ranked 26th in scoring, 8th in OBP and 64th in slugging. All of that is conducive to a very good offense which has shown signs of greatness in the regional and then there were streaks where the offense looked lost. The pitching staff was remarkable in the regional with an only 4 walks and 30 strikeouts but with a K:BB ratio of just over 2.1 for the entire season is not reasonable to expect the Noles to keep up the pace that they did in the last 3 games. 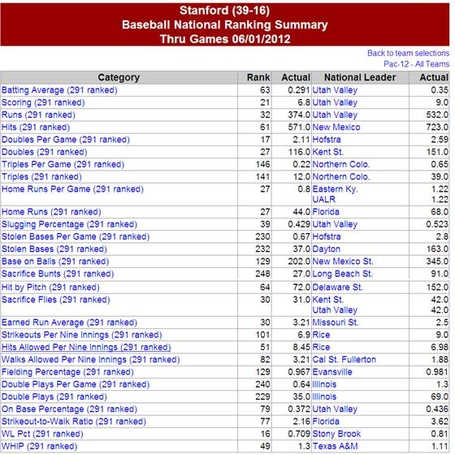 The Stanford Cardinal finished the season ranked 21st in scoring, 79th in OBP and 39th in slugging. In the regional like they have all year the Stanford offense excelled and they pose a real challenge to the young staff of Florida State. As far as pitching goes they have one of the best in Mark Appel who might be the #1 overall pick in the MLB draft tonight so it should be a great Friday matchup. As far as the rest of the Stanford staff they are no real superstars and are definitely something the Noles offense can handle.
A complete, comprehensive and analytical preview to come later this week.

The draft starts at 7PM tonight and Florida State fans should pay attention because this draft could have an extreme impact on next season.

Sr - OF - James Ramsey - Keith Law tweeted last night that James Ramsey could slide in as a sandwich pick in tonight's first round. Not based so much on his talent but based on his signability. This is great news for him and well deserved.
Jr - 1B - Jayce Boyd - This is interesting as he projects to go somewhere in the first five rounds but it is unknown what it will take to keep him from going back to school. Not sure what the incentive for him returning next year would be as he has had two great back to back years.
Jr - SS - Justin Gonzalez - Despite his propensity to strike out some scouts think he projects higher than any other Seminole on the team. He is a solid middle infielder who might get drafted high enough for him to forgo his senior year.
Jr - 2B - Devon Travis - There is no doubt that he is the best fielding second baseman to ever play at Florida State. But given his lack of speed, size and hit tools where he goes is really up in the air. Florida State fans would love to have him back next season.
Jr - RHP - Robert Benincasa - It was a breakout year for him as a closer, he throws low 90's fastball and has a great out pitch. Does he get the money he needs to leave Florida State?

Of the current players who have signed their LOI there are 4 that are in the PG Top 250 which includes both collegiate, high school and international players. While ranked the highest Jameis Winston isn't a serious threat to sign a major league deal so look for him to be on campus this summer. Tyler Pike is a pitcher that could go either way, as of two months ago some thought he could go as high as the 2nd round, here is a good write up on him in an ESPN Insider article.

Catcher Tomas Nido is also mentioned in that article and he like Bryan De La Rosa are players that might not make it on campus. Being foreign born there is a higher probability that they will take a contact over a scholarship. Outside of those players I would be pretty surprised to see any other commits no make it on campus because of the draft.

So as you can see worst case scenario, Florida State loses their entire infield, 1-4 hitters and one of the best closers in the game. That would be devastating since the 2010-11 recruiting class was awful as none of the players in that class are on the team which means next year's team will be extremely young and inexperienced.

Stay tuned, would love to hear your thoughts on Stanford and hope to see you back tonight as we chat about the draft.