17 innings pitched, 7 hits, 1 earned run, 2 walks and 21 strikeouts was the combined line for both pitchers in last week's regional. While that is to be expected from Appel the Seminoles were surprised to see he freshman control the powerful Samford lineup. 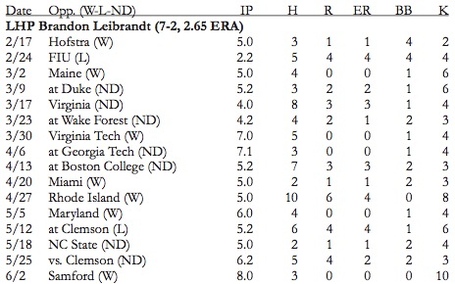 Leibrandt has pitched five plus innings in his last 10 starts and allowed 4 runs or less in 9 of those however that probably won't be good enough to win versus Appel. While eight innings isn't expected a solid start would be great as the Noles can ill afford to use their bullpen early in the series.

Appel has allowed more than 2 runs twice this year. I'll repeat it again, two earned runs or less in 13 of his 15 starts. If the Noles can score more than that consider it a minor victory, not to say it isn't possible though. In his two non quality starts he allowed 7 runs to Fresno State and 6 runs to Arizona, the Noles have an offense comparable to those and if hey can catch a few breaks they should be able to score some runs.