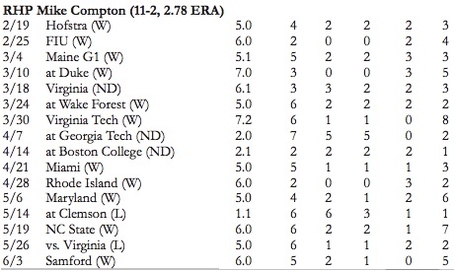 Compton's numbers are really good, he's got enough, throws an 87-89 mph sinker, kind of a slinger with a decent slider.

"I think the thing with Mooneyham is, if Mooneyham's on, you're in trouble. He has good enough stuff that when he throws his breaking ball and his change, and commands his fastball some, you'll be in for a tough day. Because it'll be 91 and a curveball, all arms and legs and deceptive, it's seven innings with nine strikeouts and one run. Or, he could be four walks in two innings and four hits and the next thing you know it's five runs. So it depends on what they're getting from him that day, which is tough.