This is the 33rd in a series of articles counting down the most important players for Florida State in 2012. There are 25 days until FSU football, and that's how many are left on the list. That means no off days. Oh, and these are not in any specific order.

The top-rated tight end prospect in the country, who presents matchup problems with his athleticism...as a senior, caught 51 passes for 875 yards and 12 touchdowns in helping lead Dwyer to the 2010 Class 4A state football semifinals...helped Dwyer win the 4A title in 2009...U.S. Army All-American...Rivals ranked him as the No. 1 tight end and No. 33 player overall while Scout.com had him the No. 3 tight end and the 62nd best player in the nation...rated a five-star prospect, the No. 1 tight end and the No. 16 overall player in the nation by 247Sports...All-USA Second Team offense by USA Today...No. 20 on the ESPNU 150 and rated the No. 2 tight end prospect...No. 74 on Tom Lemming's MaxPreps.com 2011 Top 100...Sun Sentinel Super 11 selection...No. 1 on the Sun Sentinel's Top 32 Broward County Seniors...No. 3 on Bill Buchalter's 2011 Florida Top 100 for the Orlando Sentinel...No. 39 on Mobile Press-Register Super Southeast 120...First Team All-Palm Beach County by Sun Sentinel...also excelled as a punter and special teams player...member of the Florida Times-Union's Florida Super 75 where he was rated as the No. 1 tight end...Palm Beach Post All-Area First Team...No. 10 on the SuperPrep Florida 110...Grandson of legendary golfer Jack Nicklaus...born August 31, 1992.

Nick O'Leary came to Florida State in 2011 heralded as one of the top tight end recruits in the country out of Dwyer High School in Palm Beach Gardens, Fla. I'll go ahead and get the arbitrary details out of the way first: O'Leary is the grandson of golf legend Jack Nicklaus and unlike most pass-catchers in today's game, he doesn't wear gloves, which has earned him the nickname "Throwback." Not that those details aren't interesting, but you've probably heard them about 500 times by now thanks to ESPN.

As a freshman, O'Leary saw action in all 13 games on his way to a 12-catch, 164-yard season. He had his biggest game of the year against Boston College (87 yards on three receptions), and he found the end zone once in the form of a short TD pass from EJ Manuel in FSU's lopsided win at Duke in mid October. He also suffered a minor shoulder/neck area injury in August but it didn't keep him off the field.

Thanks to solid playing time in 2011—which was both a result of his talent level and the lack of talent FSU had ahead of him at TE—O’Leary enters 2012 with some quality game experience. He looked very good in the spring and appears to be set for a much larger role in the offense this season.

As the clear No. 1 option at tight end, O'Leary has a chance to be a primary target for Manuel. His versatility as a receiver will allow him to occupy a true H-back role for the 'Noles, which is something that the offense has lacked in years past under Jimbo Fisher. As a tight end/fullback hybrid (think of a Dallas Clark or Chris Cooley type), the sophomore will add a new dimension to the offense that should complement the deep, talented group of wide receivers that Florida State returns on the outside.

O'Leary possesses great athleticism for his size, which makes him a tough cover and a handful to bring down upon contact. He's also shown an ability to make tough catches, most notably when he elevated to snag an onside kick against Miami and subsequently held off several scrapping defenders on the way to the ground to seal a win.

Teammates and coaches have raved about his ability to get open since he arrived on campus. Manuel even noted recently that O'Leary routinely gives linebackers and safeties "the business" in 7-on-7 drills. This ability to stretch the middle of the field, run good routes and ultimately get open often is what makes the prospect of his expanded role exciting. O'Leary's reliable hands and rout running (something neither Beau Reliford or Jabaris Little brought to the table consistently) could provide a steady target over the middle of the field for EJ.

And that's something that should not be overlooked.

In Nick O'Leary Could Provide Valuable Consistency Over The Middle, Bud wrote:

It's no secret that quarterback EJ Manuel has struggled reading and throwing to the middle of the field during his time in Tallahassee. Part of that is Manuel's fault, but part of it has been a lack of reliable receiving options over the middle. Beau Reliford had the size, but wasn't particularly quick in and out of his cuts. And he really struggled to understand extremely simple assignments. Several times during his career (Maryland '09, Oklahoma '11, etc.) a Reliford missed assignment on a very simple thing that a QB should be able to believe will be executed correctly led to an interception. No quarterback could fully trust Reliford with his track record.

Additionally, though Manuel had a loaded receiving corps in 2011, he did not have Willie Haulstead. In 2010, Haulstead was a pretty good option over the middle.

I get the sense that fans are somehow disappointed in O'Leary, a consensus four-star recruit in the class of 2011. I don't understand that line of thinking. O'Leary did battle a shoulder (area) injury last season and was learning the offense. He looked good Saturday and had a good spring from all indications.

O'Leary can be a very valuable piece for the Seminoles in 2012 without being an All-American by simply playing the role of security blanket for EJ Manuel. Highlight plays are great, but if O'Leary can just consistently be in the right spot in the 5-10 yard range in the middle of the field, he'll be Manuel's favorite player and a major headache for opposing linebackers as he extends drives on 3rd-&-4, etc. If he can do that and catch 2-4 balls a game, he could end up as a 35-catch, 400-yard tight end. And with many of those catches going for first downs, that is quite a valuable contribution indeed.

O'Leary does need to improve in his blocking, which is something that will be aided by a full off-season in Vic Viloria's strength and conditioning program.

The good news for O'Leary is that the newly acquired Kevin Haplea and defensive end transplant Dan Hicks will provide blocking help as bigger, more traditional in-line tight ends. O'Leary's alignment off the line of scrimmage as H-back and fullback at times will make blocking a bit easier for him by giving him more advantageous angles.

Overall, O'Leary is poised to have a solid season and contribute a great deal to the FSU offense. The former four-star recruit brings a legitimate threat in the passing game that FSU has not had at tight end in a long time. He is one of many weapons that Manuel has at his disposal, but he may turn out to be the most consistent target that the senior QB has this season.

There's a reason you see Florida State working O'Leary more as an off-set H-Back/wing as is shown here. 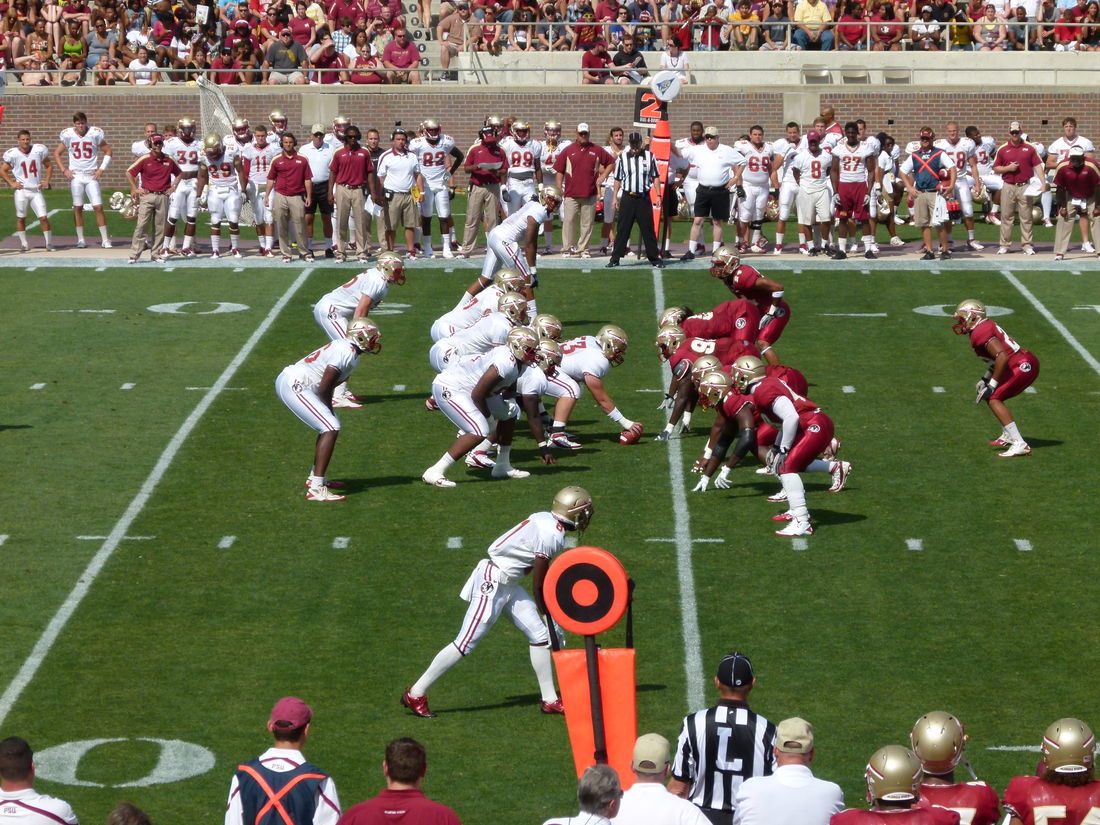 Sets like these can help him with achieve easier blocking angles, which in turn will help him to be on the field more in 2012.