Evaluating the injuries to Ian Miller and Terrance Shannon

Listening to announcers you'd think FSU is a deep team. But four players on the roster had played more than 8 minutes game entering this season - and two of them got hurt.

Share All sharing options for: Evaluating the injuries to Ian Miller and Terrance Shannon

Injury luck is an overlooked part of college basketball. It's talked about all the time in football, because football is a violent game. But basketball has its share of injuries as well. Just ask Terrance Shannon, who has played 68 basketball games in the past five years. And it's not like his injuries are nagging ankles or injured backs. His injuries have been due to contact. Two blown knees. A shoulder operation after being landed on while diving for a loose ball. Bruising on his spine after going head first into a player's hip.

When FSU began the season their depth was a major potential issue. It's almost impossible to be successful when you're running a team with freshmen point guards, but FSU had Ian Miller on the floor to calm them down. When needed, he could take the ball and direct the offense.

But Miller got hurt. It's been 15 games since his injury, and he still doesn't practice. During games he limps. According to ESPN his foot won't heal until the off-season.

In the front court, the transfer of Antwan Space (who had suffered a bad injury himself - and left to be closer to his child) left FSU with just Okaro White and Terrance Shannon as 3/4 players who had been in the system. Okaro was needed because he's a matchup problem. Terrance was needed because he's FSUs only real power player on the interior. He was FSU's best rebounder and 2nd place wasn't that close.

But Shannon got hurt. According to Coach Hamilton it will be a surprise if Shannon suits up again this season.

So a team which entered the year with four experienced players is now down one for the year, and another hobbles around the court and doesn't practice.

To evaluate the impact, I looked at FSU's rankings at kenpom.com. They are updated after every game, and they are based on a model depending on how FSU performs. In other words - there's no human subjectivity. He doesn't raise or lower FSU based on how good he thinks they are. Rather, it's based 100% on how they play. You can lose to a good team and move up. You can beat a bad team and move down. In other words, it makes sense. 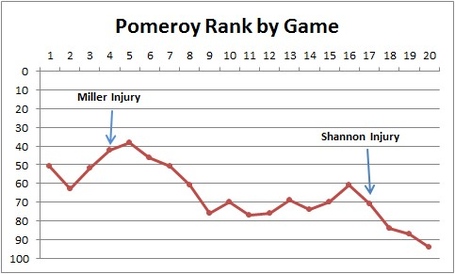 Miller was injured at the end of the Brooklyn trip. Following that game, FSU moved up to 38th, which is their peak for the season. Since then, with the freshmen point guards essentially on their own, it's been a steady drop.

Things seemed to level off between 60th and 70th, and then Shannon got hurt. Since then? It's not pretty.

Will FSU recover? Who knows? The only silver lining is that a lot of minutes have opened up for the new guys. And that experience will pay off next season.