FSU's roster is shorthanded. How will that affect the game plans?

Share All sharing options for: New roster will force changes in philosophy

Early in the 2011-12 season FSU's offense was struggling to find an identity. There were painfully long stretches without buckets (46-41 loss to Harvard anyone?). To remedy this, Coach Hamilton made the philosophical swing from a traditional lineup to a 3-guard lineup. Considering that FSU would go on to win their first ACC title, that ended up being a pretty good move.

Last year he kept the same attack, only this time it was run by a bunch of newcomers and an injured Ian Miller. Predictably, the offense sputtered. Most notable was the tempo, which plummeted from the 41st fastest attack in the nation to the 128th (out of 348 D1 teams). FSU spent an awful lot of time just trying to get set. It was ugly, but with a young and talented team, it was easy to look ahead to brighter times.

Michael Snaer graduated, but FSU had a talented combo guard in Xavier Rathan-Mayes to replace him. Then Terry Whisnant transferred, which cut into the guard depth. And XRM ended up not qualifying.

Suddenly FSU found itself with nearly as many 7-footers (3) as guards (4).

This is going to cause a philosophical shift back to a more traditional lineup. But this doesn't mean that it will look the same as the Bernard James/Xavier Gibson/etc... attacks. The reason is that FSU's guards are better attackers than Luke Loucks, Deividas Dulkys, etc... but worse shooters. All four current guards can attack off the dribble, and Montay Brandon and Aaron Thomas are slashers first and foremost.

So what is the offense going to look like?

I've put together a tape with three plays to demonstrate.

First, is the Mismatch. Going to a larger lineup, but having athletes who can guard smaller players (Montay Brandon, Robert Gilchrist), can create mismatches when FSU has the ball. In the video, Brandon (6-7) gets matched up against Duke's Quinn Cook (6-1) to a predictable end.

Second, is the 4-1, dribble attack. This is the most important, as it will likely be the basis of FSU's offense. One way to attack when you aren't blessed with a stable of good shooters is (counter-intuitively) to play everyone outside. This spreads the defense and allows gaps for players to drive. Here's a still of the key point in the video. When Snaer gets double teamed, watch Okaro slip to the outside, and Bojo cut to Snaer. 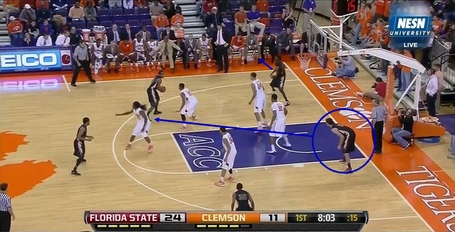 Bojo was likely setting a screen to free Snaer, but Snaer was anxious, didn't need the screen, and drove before Bojo arrived. Driving against a spread out defense means that the defense cannot rotate to cover everyone should they double team the ball-handler. Which they do here.

Third, is the runout. Expect FSU to be able to push the tempo more effectively this season. The Noles have great athletes at the 3/4 (Gilchrist, Okaro White, Jarquez Smith) and should be able to take advantage several times a game.

Also, tonight is Seminole Madness at the Tuck. Doors open at 6. It's free. And Jameis Winston will be judging the dunk contest. Have fun.