Share All sharing options for: Florida State dominates Florida 37-7 in the Swamp

For a quarter, most any team in college football can play with another. And for much of the first 20 minutes in the swamp, Florida indeed hung with Florida State. FSU dropped long passes, misfired on some throws, sometimes hit the wrong hole on run plays, missed blocks, and generally played poorly. And on other plays, Florida did a great job of being physical with FSU's receivers, ran a lot of blitz schemes that confused Florida State's protections, and did not turn the football over.

No shortage of motivation 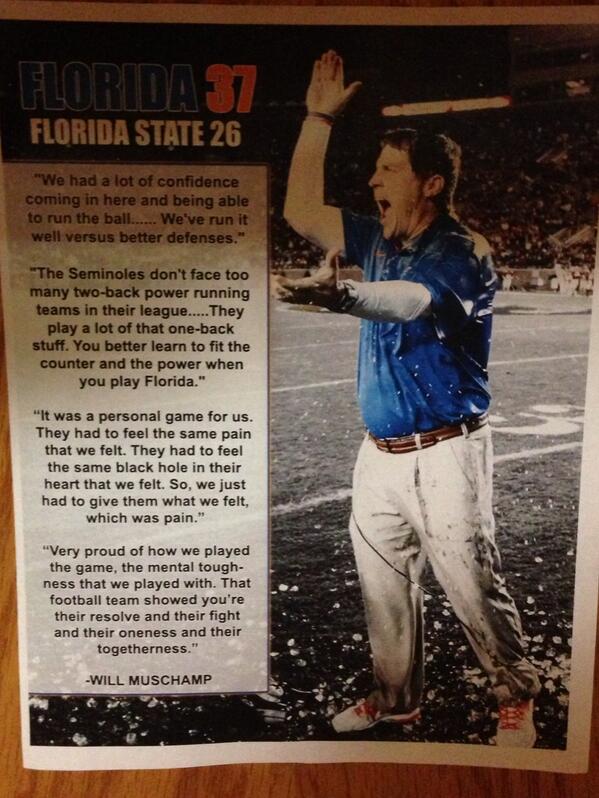 Some Florida State defenders kept a reminder in their lockers in the year following the 2012 loss to Florida.

But Florida's offense was about as bad as expected, being completely shut down by FSU's defense, and that allowed FSU's offense to get into a rhythm. Florida was held under 200 yards on the day and was never close to scoring a touchdown with the game in the balance.

Starting at the 10-minute mark of the second quarter, Florida State embarked on a 12-play, 96-yard drive, ending in a 45-yard score by Kelvin Benjamin, who caught a post route, broke multiple tackles and strip attempts as he rumbled to the end zone. It was the first big play for Benjamin, who had previously dropped a pass that could have gone for 70 or more yards and a touchdown. The key play in the drive, however, was a third-and-26 play to Kenny Shaw, who held on to the football despite being rocked.

Florida State had three long scoring drives on the day, stretching 91, 84 and 90 yards. FSU was constantly backed up in poor field position until late in the game, which kept scoring down. On the day, FSU was 5-6 on third downs, while Florida was 0-6.

This is Jimbo Fisher's third win in four tries against the Gators, and he is undefeated in The Swamp as head coach of the Seminoles.

The 30-point victory ties Florida's 2008 game in Tallahassee for the largest margin of victory by a road team in the series. Florida State covered the 27.5-point line.