Share All sharing options for: Inside the box score: FSU 60, UMass 55 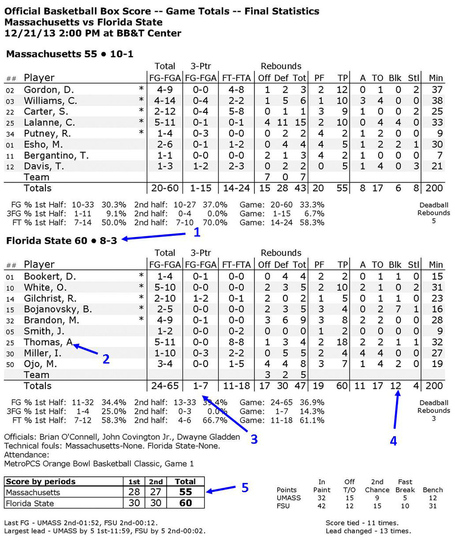 1. FSU is now 8-3 with one game left in the out of conference schedule. Picked by most to finish 9th or 10th in the ACC, the Noles have clearly exceeded expectations. Pomeroy currently projects an 11-7 conference record. Team rankings projects the Noles with a 72% of dancing, after entering the week in the 40s. FSU is now off until the 30th when they play their final non-ACC game vs Charleston Southern.

2. Aaron Thomas led all scorers with 18 points, and has now scored in double figures in three straight games (18.8 ppg) and five of six (14.8 ppg). For the season he's averaging 12.4 ppg. The last underclassmen at FSU to score more than 12 points per game for a season was sophomore Toney Douglas in 2006-07 when he scored 12.7 per game.

4. The Noles had 12 blocks which was a high for the year, and blocked one in five shots attempted by UMass. For those that follow me on Twitter, you know that I always complain when one of our shot blockers volleyball swats one into the stands, because all that does is set a team up for a highly efficient baseline out of bounds play (but it also gets them on ESPN). Against the Minutemen, the Noles did not block a single shot out of play, and recovered 10 of 12 blocked shots. That's how you win games. Bojo had seven blocks, making him the 7th player in FSU history to record at least that many in a game. If you want to know what 12 blocks looks like, have at it:

5. The final score was 60-55, good guys. UMass scored 0.753 points per possession, which is the lowest vs FSU since last year's Louisiana Monroe game. It was not only UMass's worst game of the season, but it was their worst since November 2011. Their opponent in that game? Florida State.