Share All sharing options for: Inside FSU's defensive breakdowns

Under Leonard Hamilton FSU's defense has never once ranked outside of the nation's top-75. During the current 4-year NCAA Tournament streak it's never been worse than last year's No. 15.

151 is a staggering number. I never would have predicted that big of a fall. I'm still not sure that I even believe it.

The convenient excuse is the new guys. And it's true. FSU has one of the youngest teams not just in the ACC but in the entire nation. And two of the guys computers see as "experienced" are JUCO transfers who arrived at FSU extremely raw. But it takes more than that to be awful on defense.

This misconception about good defensive players is that they lock down their man. That's not a good way to play defense. It's not a bad way either, it's just not how defense works. It's not about keeping your man from scoring, it's about keeping everyone's man from scoring. The offense is constantly trying to exploit mismatches both in material and in space. The defense has to react to those exploitations. And it takes five guys to do it.

Here are two plays from the Virginia Tech game. In this first one (click to enlarge) the Hokies are setting up a double screen for Erick Green (being guarded by Devon Bookert in the top left of the frame). A typical double screen would involve two offensive players screening Bookert. But FSU had been overplaying Green all night and so the Hokies knew that the screener's man (Okaro White, in this case) would switch to Green if needed. So one man screens Bookert, and the other screens White. 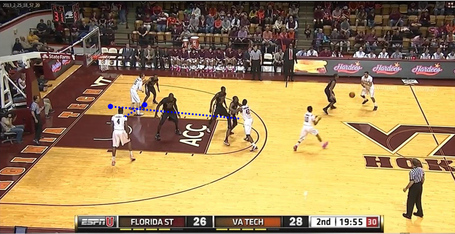 Bookert does a great job fighting through the screen, and Okaro White should see that (arrow). The only option Green has is to go to the corner, and Bookert is in position to guard that. Green can't curl because Michael Ojo has that move blocked.

But White and Bookert not communicating is just part of the problem. Look at FSU's four defenders off of the ball (circle). How many of them are aware of the ball? Aaron Thomas is doing his job by pressuring the ball handler and using the correct hand to mirror the ball, but the rest of the defenders are turned away. Part of playing defense is maintaining awareness of the ball, while also executing your responsibilities. 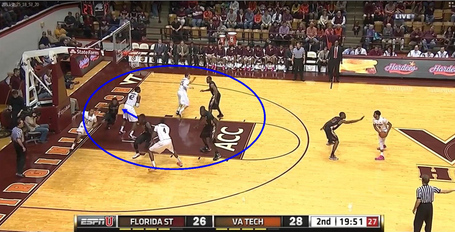 Not surprisingly this turned in to an uncontested dunk, with a foul to boot as Bookert raced back to defend the ball.

The 2nd play is a transition run which FSU has covered. The Hokies have three guys (circled) behind all five of FSU's defenders. But Erick Green is excellent at pushing into a heavy defense, so there's still call for alarm. 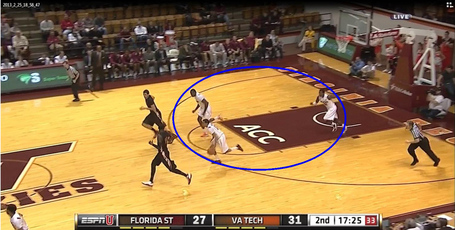 Okaro White's intentions are good in that he hesitates to try and slow down Green (circled), but in the open court White is no match for Green, and this just creates problems. Michael Snaer (arrow) had been in position to cover the wing, but now he feels like he has to step out and help stop Green. Were there better communication in the front court Snaer would know that Bookert (out of the picture) has the lane covered and that Snaer can stay with his man. 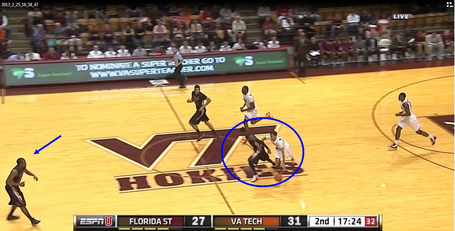 Instead Snaer steps in to stop Green (circled) while Bookert (arrow) sits down in no-man's land. The real tragedy here is that Green is out of control, and had Snaer just stepped up and drawn the charge it would have been an easy play and FSU's ball. Instead it's 3-points for the bad guys. 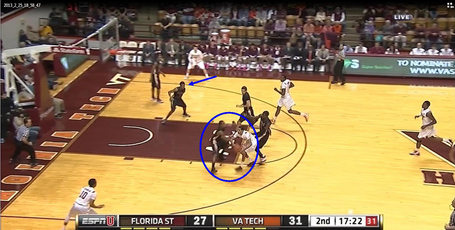