With realignment done for now, I've spent a lot of time thinking about and discussing with people what is the most intractable problem the ACC faces...divisional alignment. As of now, there is plenty of dissatisfaction with the divisions, from a lot of fans, and for a lot of different, sometimes conflicting, reasons.

To summarize, here are the primary reasons the ACC's divisions fail:

a) Going 10 years between opponents is not acceptable

2) Many of the teams that are separated by divisions and that decade gap are geographical, historical, or logical rivals, and/or premier national interest games.

I've always been a proponent of a straight north-south divide, with no crossover game. The elimination of the crossover would allow the ACC to cycle through cross-division games twice as quickly, but there's no way to eliminate the crossover and maintain important games without a straight North-South split. However, I understand why other schools in the conference would have a major problem with that. It essentially splits the league into the Big East and the ACC, and I can see why that's probably not good for the future health of the conference. I also understand, and agree, that it puts a substantial wall between the northern ACC schools and the fertile recruiting grounds in the Southern ACC.

The fact is, there are some unique aspects about the ACC that make ANY 14-team divisional split unacceptable. Yes, the SEC uses the same model, but what is merely sub-optimal in the SEC is dreadful for the ACC. The ACC is MUCH further spread out than the SEC, leaving ACC schools with many fewer driving opportunities. A geographic split would be far more competitively unbalanced in the ACC than it is in the SEC. And there are many fewer impact programs in the ACC than the SEC. It is a little easier to swallow going a decade without playing LSU, when you know you have USC, UF, UGA, Alabama on the schedule each and every year.

And going to nine conference games like the other conferences is a non-starter as well, because the SEC rivalry games and five games a year against ND.

After a lot of discussions with posters on here, and other boards, and on Twitter, I've become intrigued with the idea that the best approach is to simply scrap the idea of divisions. I decided to just set aside the obvious big question of how to fill the conference championship game, and try to take a look at whether that would really be a schedule improvement.

There would obviously be a multitude of ways to schedule a 14 team conference, but my approach was to stipulate groups of annual rivals with protected games against each other every year. These break down fairly geographically:

Protecting these games makes sure the far-flung ACC maxes out the opportunity to develop rivalries (virtually all of which other than USC-Notre Dame are based on proximity) and facilitate fan engagement. It also protects many rivalries, such as UVA-UNC, VT-UNC, CU-GT, FSU-UM, FSU-CU, UNC-NCSU-Duke, as well as assuring games that SHOULD be rivalries, such as SU-Pitt, FSU-GT, etc. It isn’t perfect as Wake Forest gets somewhat severed from their North Carolina brethren. I’m not a total "screw Wake Forest" type of guy, so if someone is going to be screwed, they’ll be screwed to the tune of more Florida exposure and a more attractive schedule, and the recruiting juice that should come with it, than any of their state-mates. Pretty good consolation prize.

Once you protect those games, you fill out the rest of the schedule as equally as possible between the other two groups. I worked out a theoretical six-year schedule, which I’ve placed at the end, for the sake of it’s a lot of spreadsheets.

Because of the uneven numbers in the groups it’s not water-tight, but it’s pretty darn equitable. The majority of the games take place in a home-and-home setup, but not all were able to be that way. There will be some one-offs to make things line up a little better. However, as you will see below, match-ups won’t go 6-10 years without getting played. I would consider them less like one-offs, and more like the way OOC arrangements are sometimes scheduled with seasons between the return game.

As you can see, the biggest difference is from current scheduling is that instead of there currently being several match-ups which take place twice every 12 years, there are now no match-ups that take place less than twice every SIX years. But even better, more than half the non-annual match-ups will come around even more frequently than that, happening three or even four times in a six year cycle. With additional cycles, which match-ups get two and which get three could change, but no more out-of-sight-out-of-mind for any team in the conference, let alone teams in the same region.

But over six years, does it work out equitably? It’s not perfect, but it’s not too bad either. 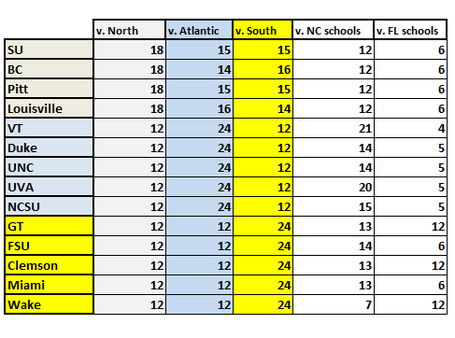 a) Wake Forest no doubt takes a hit in its home state compared to the other NC schools. With the current schedule, Wake Forest in six years would play a North Carolina team 12.85 times over six years, and in this case they drop down all the way to seven games in six years. I understand that is not really fair to them, but in compensation, they have a massive exposure advantage than the other NC schools in Georgia and Florida. And they would actually see UNC more frequently than they do now. Is that an acceptable trade for not getting both Duke and NCSU every year?

2) The Atlantic group of rivals loses about 1.2 games each per six year cycle against a Florida school. That’s not great, but I don’t think it’s devastating. And it is probably worth it for the opportunity to showcase in both North and South Florida. Florida is a big state, and it probably pays off to not be almost exclusively tied to just one or the other. The Northern rivals keep the same pace of about 1 Florida opponent a year.

D) Yes, that gives GT and Clemson more Florida access than other schools, but that's going to happen in any system that respects geography at all, and I think most people agree that has to happen. And even just by the nature of where they are located, they'll be more of a presence in Florida anyway. Trying to artificially "correct" that is pointless and hopeless. More important to make sure that say, Syracuse doesn't have massive Florida presence while Pitt has almost none, or the same between Virginia and North Carolina schools. The exception is Wake Forest, as we've mentioned, and that's a tradeoff.

There are certainly other ways to assign groups of protected rivals that could change this. The NC schools could go together in a block of four, UVA and VT could join the more Northern group, and Louisville could join the South. But frankly and unfortunately for Wake, I suspect that UNC would choose the UVA game over the Wake game. This just flat out makes more sense for everyone else.

I’m sure some of you are thinking, yeah dummy, this is just pod scheduling, and I guess it is. But despite my color coding, I’m trying to avoid labeling these as pods. For the sake of the conference, we want to avoid the sense that there are pods or quasi-divisions. I’d prefer to leave them unnamed. They are simply protected games for each team. It’s no different than when the Big 10 had 11 schools and an 8-game schedule, but Michigan always played Ohio State, Michigan State, and Minnesota. This is all one conference, no divisions.

I don’t think there is any question at all that this is a MUCH better schedule for this conference, but it begs the question…how do you fill the ACC Championship Game? Legally, you can’t even hold a championship with this type of setup, as per NCAA rules.

I’m not worried about that. The time has never been so right to get the NCAA to deregulate, and there’s simply no damn reason the NCAA should be stipulating rules like that to conferences anyway. The ACC would already have an ally in changing that in the Big 12, who might wish to hold a championship game themselves with 10 teams. I don’t see the other conferences fighting the change. What would be the purpose, spite?

It could be as simple as the first and second place team face off in the ACC Championship Game. That would at least guarantee the two best teams face each other, which could only help a game that has struggled to find its audience. It would also guarantee the ACC has a legit quality champion, and avoids the nightmare scenario of a 11-1 Clemson team losing to a 7-5 VT team in an ACC championship game.

I’ll let someone else discuss other scenarios for filling the championship game, but my philosophy is that there’s no sense in devaluing 13 weeks of a regular season over slight concerns over a single game. And it’s not like the ACC Championship game has been some rousing national success that is being put at risk. Just figure out how to put the best two teams in, and it can’t be any worse. But the regular season and the ACC schedule can be a hell of a lot better with this change.

Below, you’ll find six years of schedules. What do you think?

Does anyone not end up better off (except maybe Wake Forest)?

What are the problems?

Did I make any mistakes? 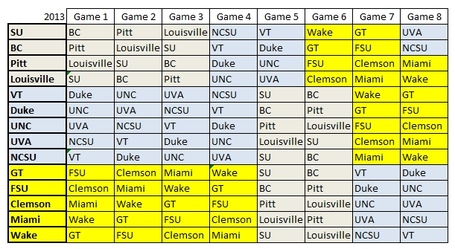 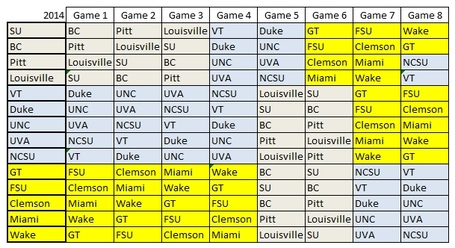 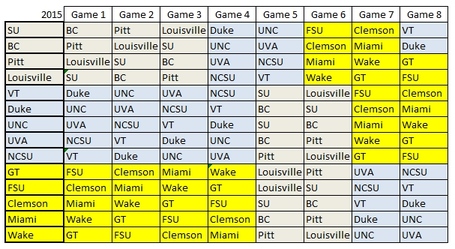 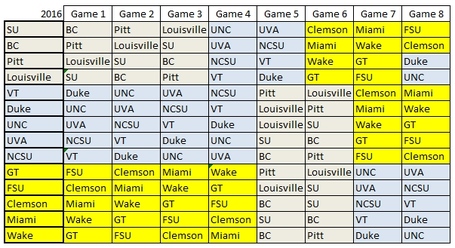 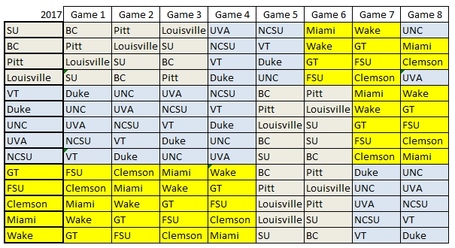 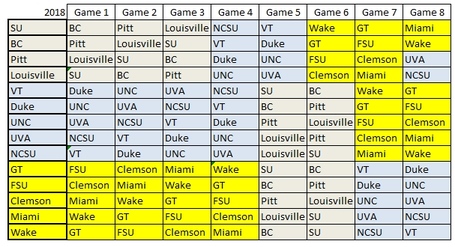