FSU practices against Bethune-Cookman. This week's game is brought to you by the word "hesitant".

Let's be realistic. Bethune-Cookman's not going to win. Due to that we're going to focus more on FSU's backups and what you, the knowledgeable fan, should look for in a majority of this game. While B-CU will try and slow the game down it's important for FSU to get up early. Get up early and you can pull your starters. Do that and you reduce the risk of injury and get your backups experience thereby increasing your functional depth.

B-CU started off with by winning a close game to Tennessee State 12-8 and followed that up by downing Virginia Union 66-7. Most recent the Wildcats beat up on FIU 34-13 getting their first win against a FBS opponent. FIU is awful.

Florida State should have no problem moving the ball against B-CU. The only thing that will stop FSU is FSU. When the Seminoles do deploy their backups against the Wildcats (FSU sure does play a lot of kitties and doggies this year) don't expect the game plan to change. The Noles have run a pretty vanilla offense onto the field in its first two games but have executed it well. There's little reason to think this will change. 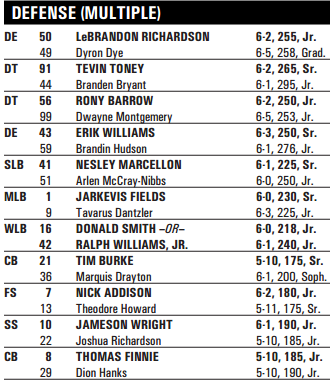 This could be a huge game for Jacob Coker. It's very likely the redshirt sophomore transfers after this year and the better he shows during his time on the field the more options he'll have. Fisher will give Coker plenty of opportunity to show fans, schools and scouts he can make all the throws. So far Jameis Winston has shown a great understanding of the offense and a very good ability to lead receivers and throw them open. Can Coker show a similar skill? Does Coker get the offense into the right play at the line? When mistakes are made how does Coker react? To date he's been the consummate professional and there's no reason to think he won't continue that. If the offense struggles it's hard to see Coker being the reason.

Karlos Williams burst on the scene last week taking a toss sweep 65 yards for a TD on his first touch. While the play was impressive and 'Los got to show off his great speed his successive carries where just as impressive. Williams did play RB in high school but he hasn't seen time at the position since and concerns about how he would fair were valid. So far, so good. Williams showed good patience in choosing his hole while exploding through it when it developed. He certainly needs to work on improving his skills in that area but early returns are good. Ryan Green was very hesitant when playing against Pitt gaining only 8 yards on 5 carries, but looked much better against Nevada. It wasn't just his production that stood out but the confidence he ran with. Can both backs continue to improve the mental part of their game?

How do the backs perform in the passing game? Pass protection is normally what keeps running backs off the field and it's rarely because the back is unwilling to block, but rather a technique error or a missed assignment issue. Usually, the back needs to step up and block the first free defender he sees closest to the center. Sometimes this requires the back to move across the formation but it always requires a good pre-snap read to identify possible free rushers. When the backs do go out for passes, how well do they chip? Many times backs will throw their shoulder at a blocked defender without much interest in actually affecting the rusher and leaving his blocker hanging out to dry. That blocker is generally leaning on the inside expecting help from the back. When he doesn't get it he can sometimes let his man get through. Green and Williams can make their presence felt here while continuing into their route.

Sterling Lovelady, Jacob Fahrenkrug, Ruben Carter, Ira Denson and Jonathan Wallace make up some of the 2nd string offensive line. Carter looks to have a bright future on the line while Lovelady will likely get a one year start at center next year (Fahrenkrug and Wallace are seniors). The goal here is for Lovelady to call the correct protection and for the rest of the rest of the line to not allow any free rushers. Pay attention to the young guys to see if they overextend themselves on their blocks. Younger linemen, in particular, can sometimes get over aggressive and try to attack a defender in pass protection making it tougher to adjust to a defenders move as they are off balance. In run blocking the blocker needs to attack the rusher and control him with good hand placement and drive. The correct technique is more important the taking out the defender in this case.

Fisher has been really high on freshmen Jesus Wilson and Isaiah Jones. While FSU went run heavy after bringing in Coker and Sean Maguire against Nevada, expect a more balanced attack against Bethune-Cookman. Getting experience is key for the two freshmen and Christian Green.

Bethune-Cookman runs a spread run game. They rarely throw, and when they do they don't throw the ball well. B-CU will likely have a game plan similar to that of Nevada: use the entire play clock and force FSU's front seven to defend all parts of the line. Early down success is key for the Wildcats as they will struggle if getting behind the down and distance marker.

In both games this year the FSU defense has gotten off to a slow start and finished strong in large part due to the FSU offense forcing teams into more passing by virtue of being so efficient. A large reason for the defensive issues has been the front 7 not lining up correctly and trusting their keys. This has caused them to miss their run fits allowing running backs to run free. Another reason for the questionable run defense for FSU is the inability of the edge players to keep contain. The DEs have had a tendency to get sucked inside and allow RBs and WRs on sweeps to get outside. Jeremy Pruitt has been able to rally his charges and the defense has done a good job of fixing these issues but can they start the game that way? 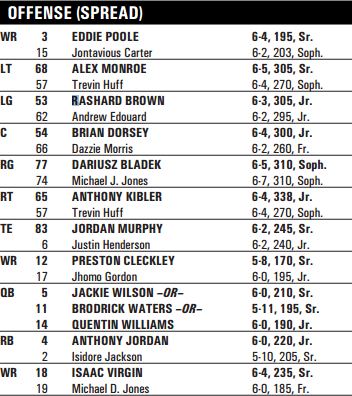 The defense does not make whole sale changes on the same level the offense does so expect a mix of first and second string players in the game.

Look for Reggie Northrup to get the start over Christian Jones, and for Mario Edwards to potentially be held out due to his hand injury.

Can the starters help the backups, and each other, get into the correct pre-snap position? How smooth will the defense look?

In that vein how quick is the defense to react post-snap? Do they trust what they see and fly to the ball? Do they have enough of an understanding of their defensive principles to instinctively react to the play or are they hesitant, thinking before they react? Will they play with good technique and leverage?

Good teams tend to stay good because they can ease younger players into their scheme by allowing them to focus on particular pieces of a defense, like rushing the passer, and plugging them into those positions. Reggie Northrup, Ukeme Eligwe and Chris Casher have looked pretty good in the time they've spent on the field, but how much of their time is situational? If they can continue to improve and show a good knowledge of the total defense and play without hesitation they will see their playing time increase.

Jalen Ramsey has shown good skills and understanding of the FSU defense but must do a better job of turning his head to find the ball while in coverage. With his coverage skills Ramsey could pull down a few extra passes and break up more if he can improve this aspect of his game.

Cason Beatty has not shown much improvement from last season but also hasn't had many opportunities. Against Nevada boomed a 53 yard punt but 25 of those yards where on the ground. That's not good and could cost FSU down the road.

This game is less about winning, which is mostly a forgone conclusion, and more about practice. B-CU runs a zone read based offense which FSU is seeing a lot this year and has the team speed to make the Noles pay for missteps. However B-CU does not have the talent or depth to keep up with a team like FSU.

However, because Bethune will probably run such an excruciatingly slow pace, FSU will be limited in its number of snaps. The bigger question is whether Fisher gets his backups in when he should or does he risk injury?