Share All sharing options for: Inside the box score: FSU 56, Clemson 41 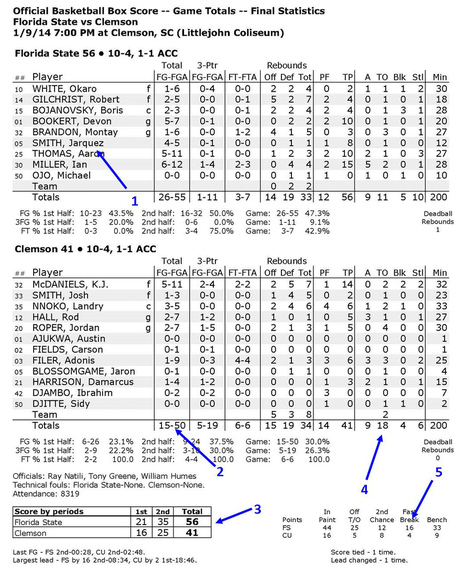 1. As Jarquez Smith becomes more comfortable with what he's asked to do defensively, his playing time is increasing. After averaging 9.6 minutes in out of conference play, he's now averaging 13 minutes in conference play. Against Clemson he kicked off FSU's scoring with an alley oop from Ian Miller, and on the night he scored a career high 8 points on 4-5 shooting.

3. FSU won 56-41 in a crawling, 55 possession game. Clemson did everything they could to take the air out of the ball and keep FSU from running, and it worked until FSU built a little momentum in the 2nd half and Clemson had to play faster in order to try and catch up. The 1.02 points per possession scored by FSU was the 4th most against Clemson all year. Clemson's offense was held to their lowest scoring of the year - 0.75 per possession. That is the third opponent this season (more than all of last year) that FSU has held below 0.8 per possession, and the Noles now have the No. 5 defense in the nation.

4. The Seminoles forced Clemson to turn the ball over on 33% of their possessions. Clemson had been excellent all year at taking care of the ball, and their worst game previously was 23%. Not only was it easily their highest turnover rate of the year, but it was the highest of Brad Brownell's four year tenure at Clemson, and the highest for any Clemson team since February 28, 2009. In that game the No. 12 Tigers lost to Florida State in Tallahassee.

5. Clemson did a great job keeping FSU out of transition in the first half. But in the 2nd half, largely due to quick outlet passes and a pressing Ian Miller, the Noles were able to run, which is how they built a double digit lead. FSU had 16 fast break points on the night, compared to just 4 for Clemson.