Share All sharing options for: Inside the box score: FSU 63, Miami 53 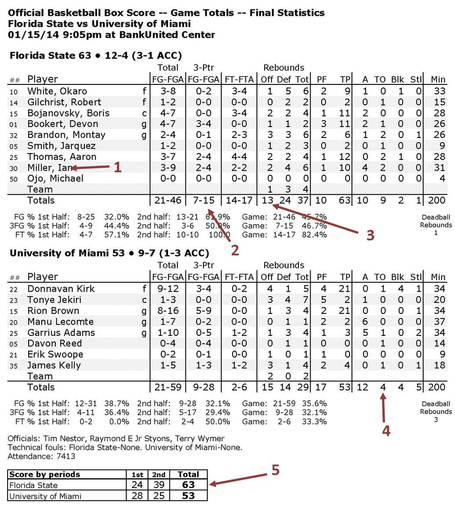 1. Ian Miller has been sick all week and needed and IV before the game to be able to play. It was a huge lift to the team that he was able to grind through 31 minutes of playing time, scoring 10 points, and adding six rebounds and four assists. It was the third straight game that he had at least four rebounds, and the fourth straight that he had at least four assists. His DR% and assist rate are both on pace for career highs.

3. FSU grabbed 13 offensive rebounds, which was 48.1% of what was available. It was their best OR% of the season. Miami had more offensive rebounds (15) but they also missed 38 shots, so their OR% was only 38%. Still, defensive rebounding continues to be a concern for FSU who are now 14th in the ACC.

4. Miami did a masterful job taking care of the ball, committing just four turnovers, which was 8% of their possessions. It was not only the lowest turnover rate vs FSU this season, but the lowest for any FSU team since an ACC tournament loss to Duke in 2009.

5. FSU won 63-53 in just a 50 possession game. For the Canes, it wasn't even their slowest game this month. But for FSU it was the slowest played game since possession data became available in late 90s. Miami became just the fourth team this year to score greater than a point per possession vs FSU (1.06), while FSU's 1.26 per possession was the most scored vs Miami since January, 2011. This is especially remarkable considering FSU scored just 24 points in 26 1st half possessions (0.92). But in the 2nd half the Noles scored an insanely efficient 39 points on just 24 possessions (1.63). Once Miami took their largest second half lead (48-43) FSU responded by scoring on 13 of the next 14 trips.