Night and day: Last year's vs this year's defense

Share All sharing options for: Night and day: Last year's vs this year's defense

Ham was Moneyball before Moneyball existed. At his major college coaching stops he's figured out how to take conference bottom feeders and turn them into winners. He took an Oklahoma State team which had languished for nearly two decades and built the foundation that Eddie Sutton would use to turn the Cowboys into a Big-8 power. At Miami he took a program which was so lightly regarded by the university that it hadn't even existed five years earlier and propelled them to the top of the Big East. And at Florida State he developed a program with the smallest budget in the ACC into one that is now the third winningest program in the conference behind national powers Duke and North Carolina.

He did this with defense. When your recruiting budget is 10% of your competition's and your facilities are borderline embarrassing, you can't just go out and reel in 5* recruits. So Ham has consistently identified projects. When big time programs watched Al Thornton, they saw a big guy who barely knew how to play basketball. When Ham saw him, he saw an All American. It would just take a few years of development.

Once Ham found some success at FSU, then recruiting became a bit easier. He was able to turn those players into defensive teams which ranked nationally No. 7, No. 3, No. 1, and No. 13 over a four-year span. And this is basketball. There are 350 teams. Being top 10 or top 20 really means something.

So it was a bit of a shock when last year's team fell all the way to 190th in defensive efficiency. I didn't see that coming. Even with all the new faces, it was still Ham calling the shots, right?

Entering this season I figured the Noles would make a massive improvement. I pegged them to jump more than 100 spots and be around 75th nationally (defensive efficiency). And my prediction was that if the team could jump all the way into the top 50, then FSU would be dancing.

We're now sixteen games into the season and FSU's defense is No. 6.

Out of curiosity, I began looking back at previous top 10 defenses and seeing what sort of defense they'd been the year before. After all, going from No. 190 to No. 6 seemed like an improbably leap, but I hadn't looked at the data. 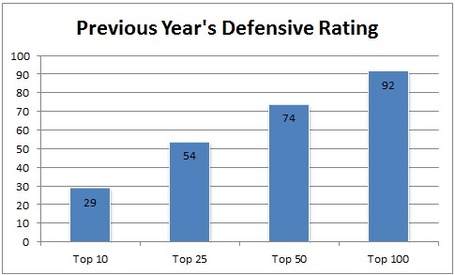 92% had been in the top 100. It turns out that only two defenses had been outside the top 150 before jumping into the top 10. The first was Oregon last year (No. 10). They did it by grabbing a graduate transfer from Rice named Arsalan Kazemi who was the No. 1 rebounder in the nation. The previous season they had been No. 187, and they jumped to No. 10. Florida State was No. 190 last year, and has jumped to No. 6.

So how has FSU done this? The simple answer is that they're executing. Great defenses have five guys defending the ball, not five guys stopping their man. And FSU's 2nd year players finally get that, and are finally doing what the coaches are asking them to do. If the other team scores, it's not on the person who was guarding that man, it's on the entire team.

I teased out some key numbers. The five categories below are the opponents overall eFG%, eFG% in transition situations, eFG% at the rim, % of shots blocked at the rim, and the % of opponent possessions which go under 5 seconds on the shot clock but still finish at the rim (ie - late layups).

FSU's defense has made massive improvements in all of these categories.

So Hamball is back, and FSU (picked by the media to finish 9th-10th in the ACC) is tied for 3rd and is ahead of Duke and UNC. Enjoy it. Embrace the defense.