Share All sharing options for: Inside the box score: FSU 76, Notre Dame 74 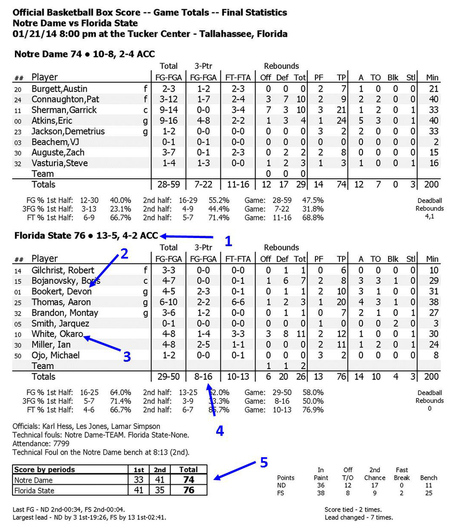 1. With the win FSU is now 13-5, 4-2, which isn't bad for a team picked to finish 9th in the ACC (12th by CBS's Matt Norlander). The Noles ACC schedule is also front loaded, and following Saturday's game at Duke the Seminoles are only projected to be underdogs in two of the final eleven games. Team Rankings currently lists FSU chances of making the dance at 87.4% with a 7-seed being the most likely.

3. Okaro White came off the bench for the first time since his sophomore year, and the switch resulted in his fourth double double of the season.

5. FSU won 76-74 in a 60 possession game. The 1.27 points scored per possession was the 2nd highest total of the year (after the Charlotte game) and FSU has now scored at least a point per possession against five straight ACC opponents, something FSU hadn't done since the 2008-09 season. The Noles offense is now ranked No. 46 nationally (out of 351 D1 teams), and is currently the best at FSU since Al Thornton was a senior and the Noles finished the season with the nation's No. 20 offense.