Share All sharing options for: As haters hate, Florida State shakes off Gators

Under the cover of fireworks, Florida State's players hugged and carried the gator head off the field, as is tradition after a win over Florida. Then the Marching Chiefs played a gigantic middle finger to a nation of college football fans that already in 2014 have resorted to rooting for Miami, Notre Dame and Florida.

The song: Shake It Off, by Taylor Swift.

It's what this team has done again and again. A perfect 6-0 in games decided by a single score, falling behind in the second half far too often. A high-wire act that just hasn't fallen off. A nightmare to cover, as game stories must be junked and re-written at the final gun.

And above all: hated by everyone who doesn't wear the garnet and gold, for antics and actions both on the field and off. They see FSU play good, but decidedly not great football, and yet achieve the best record of any team in college football, week after week. This must be how Jafar felt in Aladdin when he lamented "How many times do I have to kill you, boy?"

The macro was the same as it's been. Florida State falls behind early and then comes alive for the comeback.

But the micro was very much a new tale. A week after Jameis Winston played what Jimbo Fisher described as his "best game," against Boston College -- one hidden from the box score by six crucial drops in the rain, Winston turned in what was inarguably the worst performance of his career -- 12-24, 125 yards and four interceptions.

And he was bailed out by his oft-maligned defense, which held Florida to just 114 rushing yards -- 314 fewer than Georgia gave up against the Gators just a month ago, and by a running game that has continued to emerge over the second half of the season, as FSU's running backs ran for 179 yards on 32 carries, paced by 144 from Dalvin Cook, who saw his workload increase after senior Karlos Williams went out with a concussion.

Jameis Winston began just 2-8, with 3 interceptions, two of which clearly appeared to be his fault. Florida State had only 30 yards on 13 plays in the first quarter. Florida had Winston and the offense confused, but the defense -- FSU's lesser unit on the year, repeatedly stiffened to hold Florida to three field goals, and even scored itself, as injured linebacker Terrance Smith corralled a tipped pass intended for Tevin Westbrook and raced 94 yards to cut the lead to 9-7.

And the feeling was one of "Florida has completely dominated the first quarter of this game and leads by just two."

Florida State then turned it on in the second quarter, ripping off touchdown drives of 93 and 83 yards to go up 21-9, thanks to a strong run game that put up 100 yards on the ground in the quarter. For its part, Florida missed opportunities in the half, as Treon Harris floated one pass for a sure long gainer and misfired on another that would have produced a first down. Florida's receivers played very well all night, but Harris simply missed them.

But the double-digit lead was short lived, as the Seminoles -- in a change from recent weeks, tried to be aggressive and score right before the half. A reasonable move given that Florida State has the best kicker in college football, and timeouts to burn. But it backfired, as FSU could not move into field goal range, and then surrendered a blocked punt that was immediately turned into points as freshman quarterback Treon Harris hit tight end Clay Burton as the FSU pressure failed to reach the QB to pull to within 21-16.

FSU had a chance to make Florida quit. The Gators' defense was playing some wildly undisciplined football in the second quarter, both in terms of blown assignments and unchecked aggression. Instead, UF was given life by the blocked punt, and refocused itself.

Field position was a major theme throughout the day. Florida's average starting field position in the first half was its own 49. Florida State's? Its own 25. Over the course of eight drives, that is a 198-yard advantage for the Gators in hidden yards in the first half. For the game, the advantage was over 240 yards over 13 drives.

But the Gators simply could not cash in the favorable spots. Five times Florida started with the ball in FSU territory, and they managed just 13 points on those marches. Incredibly, despite starting in FSU territory seven times, UF reached the red zone only three, and two of those drives began in the red zone, meaning that five times Florida started with the ball between the 50 and Florida State's 21, and entered the red zone only once.

The scoring in the second half was 3-3, in favor of Florida, or so it felt. FSU had drives of 34, 31 and 55 yards, and managed only three points, thanks to some uncharacteristically poor situational football. Florida State, running well with Dalvin Cook, elected to throw the football on third and a long two from the Florida 30, and Jameis Winston took a horrible sack, which left FSU in fourth and 10 at the Florida 38, out of field goal range. FSU then elected to take a punt with defensive lineman Mario Edwards, Jr., who was tackled -- six yards short of the first down. On an earlier drive, Winston threw an ill-advised interception that Florida almost certainly would have scored on if the defender had better vision on the return.

Florida missed two field goal attempts, of 42 and 52 yards, that would have given the Gators the lead, and after Roberto Aguayo hit one of 37 yards for the Seminoles, UF needed a touchdown to win. The Gators never crossed the 50.

This was one of the nastiest games I've ever seen. Constant trash talk after every play, multiple personal fouls and late hits, and the feeling that a fight could break out at any moment.

For the seniors, it was their third win in four tries, capping their record against rivals Florida, Miami and Clemson at an incredible 10-2. This group of players has not lost since it fell to these Gators in 2012. More than half of the roster has never lost a game.

Whoever made this needs to update it. 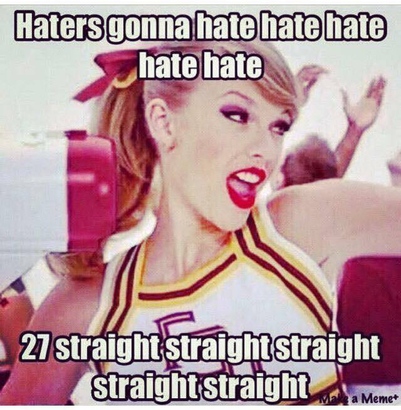