Share All sharing options for: Inside the box score: FSU 78, LA Tech 75 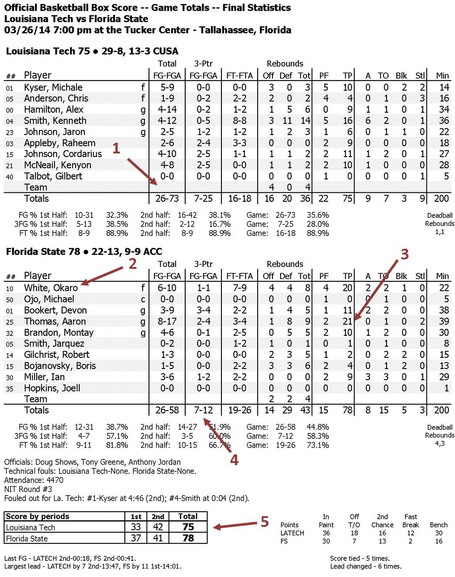 2. Okaro White scored 20 points on just 10 shots, and added 8 rebounds. The 20 points moved him past Hugh Durham (namesake of FSU's MVP award) for 17th all time at FSU, and he is now 14 points behind Reggie Royals. He also made seven free throws to move into 5th all time.

3. With 21 points, Aaron Thomas scored in double figures for the 16th straight game. Through the first 21 games of the season Thomas averaged 12.5 points per game, and since then he's averaged 18.4 per game. In the NIT he is averaging 23 points and 6.3 rebounds per game. He is the highest scoring underclassman in Leonard Hamilton's tenure.

5. The Noles won 78-75 in a 72 possession game. FSU's last two games have now been played at a higher tempo than any ACC game this season. After dropping 1.37 points per possession on Georgetown (the most scored on the Hoyas this year), FSU scored 1.08 vs LA Tech, which is the 8th most vs the Bulldogs this year.