An In-Depth Look at the Tallahassee Regional

A comprehensive look at each team in the Tallahassee Regional as well as an interview with a former big league player and college great.

Share All sharing options for: An In-Depth Look at the Tallahassee Regional

Florida State is paired with the Louisville Regional, follow up with scores from that region here.

A full bracket of all 64 teams can be found here.

While there is no actual television coverage every game can be found on ESPN3, commentators are Joe Davis & Greg Swindell, a full list of coverage can be found here. We were fortunate enough to have a Q&A with the former 17 year major league player and college baseball hall of famer.

Tomahawk Nation (TN): What do you consider the biggest strength of each team in the Tallahassee Regional? What are your predictions?

TN: You are no stranger to postseason baseball having reached Omaha twice in your three years, what was it like the first time you entered regional play as a freshman? How did your approach change your second and third time around?

GS: My freshman year it helped playing the regionals in Austin. And I believe I faced the University of Houston who I was familiar with.  The 2nd and 3rd times were at home again and we were expected to win but I kept my same approach, throw strikes.

TN: This marks the 37th consecutive year that Florida State has made the postseason, what is it that the Seminoles do so well to stay at such an elite level year after year?

GS: Mike Martin. He teaches the players the game and they understand him. Some players you have to coach four 3-4 years, his players understand game situations and always have.

TN: What do you feel is the key to Florida State making it back to Omaha this season and what must happen for them to win that elusive national championship?

GS: Pitching. Now days pitching against these bats makes it more important and playing solid defense. The stars need to align right and all things have to be clicking for them the get that title.

A big thank you to Greg for taking the time to answer our questions and we look forward to hearing him this weekend, you can check out his picks for Omaha here.

You can listen locally on 94.3 FM/1270 AM on Friday and 100.7 FM on Saturday/Sunday. Live stats can be found here. Bookmark this page for all of your coverage needs and make sure to bookmark our Regional Stream which will be updated continuously throughout the weekend. Of course there will be a thread for every game this weekend as @dtackett_ , @AriyaMassoudi and @RodMahoney (myself) will be there in Tallahassee, follow us for all the play by play and updates.

Make sure you visit our own Tallahassee Regional Visitor's Guide if this is your first time in Tallahassee and feel free to ask any questions below. 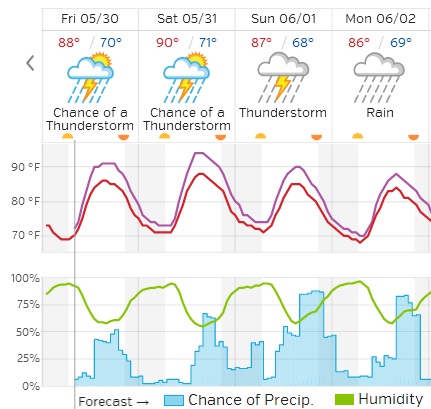 Tallahassee was fortunate to not have a single delay last year which mean we are due this year. The forecast calls for rain which means there will be lightning somewhere within 300 miles, which is enough to cause for a stoppage.

The Seminoles are the obvious favorite here earning a postseason bid for the 37th year in a row. Their level of competition is as good as any in the country, they went 12-12 against teams that made the tournament this season but struggles against national seeds, going 2-5 against Florida and Virginia. Florida State has advanced to super regionals six years in a row, the longest streak in the country.

Alabama is one of the weaker two seeds in the bracket but they did have success playing in the best conference in the country. The Crimson Tide is familiar with Tallahassee as they lost twice to Troy last year in regionals and have been here three times in the last four years. This veteran club struggled down the stretch but did have some impressive series wins over Kentucky and a sweep against Ole Miss.

The Owls made the tournament by winning the Atlantic Sun which is a below average baseball conference this season. Their signature wins came at the beginning of the season when they defeated Georgia and Georgia Tech in relatively meaningless weekday games. This is their first ever appearance to the postseason.

This is the 14th appearance for the Eagles, first since 2011 and they are in with an automatic bid after they won the conference tournament despite finishing just three games over .500 in conference play. Georgia Southern's marquee wins were against Georgia Tech and Clemson, both considered bubble teams before the ACC tournament. They did however finish strong winning 11 of their last 13 games including 5 consecutive after dropping the first game of their conference tournament.

The first thing that you should notice is that there is plenty of offense in this region, the real question is just how inflated the three and four seeds are due to their weak strength of schedule. The Seminoles undoubtedly have a terrific offense, one of the best in the country as they have proved by facing strong opponents all season long. They are led by the ACC Player of the Year DJ Stewart (.348/.469/.561) and are protected by fellow first teamers in John Nogowski (.311/.433/.451) and Jose Brizuela (.325/.407/.453). The Noles are constantly on base as they lead the nation in walks, which constantly pressures opposing pitchers lending them to score as many runs as they do.

Outside of some power, second to only Kentucky in homeruns within the SEC, there is not much that Alabama does well. They struggled to score last season and that has continued in 2014 with an unimpressive on-base percentage and the fact that they strike out more than twice as much than they walk. The offensive leaders for the Tide are All SEC Team members Ben Moore (.305/.363/.486) and Wade Wass (.305/.398/.468), the right fielder Moore leads the team with 9 homeruns while Wass, the designated hitter is more free swinging.

There is no questioning the Owls Max Pentacost (.423/.477/.634), a talented, probable first round draft pick that is a huge threat in the middle of the lineup. Hitting cleanup for Kennesaw State is center fielder Bo Way (.364/.414/.481) who is also a threat on the base paths, he has been successful in 10 of 13 attempts. Every other starter in the lineup has struck out more than they have walked and all possess an on-base percentage of .350 or lower.

Georgia Southern is currently tied for fourth in the country with an impressive 59 homeruns this season. There are seven players on the lineup that have hit at least five homeruns on the season, for reference Florida State only has two. Aaron Mizell (.313/.390/.545) and Stryker Brown (.325/.409/.522) are the team's best bats who have combined to hit 23 homeruns and look to take advantage of the short right field fence that favors left handed hitters.

The Seminoles received some fantastic news this week as starting pitcher Brandon Leibrandt (39.1 IP/1.02 WHIP/6.86 K/9) will see action for the first time in two months. While he probably won't start seeing him pitch in any capacity is a huge pitch for the Noles chances of reaching Omaha. Luke Weaver (101.1 IP/1.04 WHIP/7.19 K/9)  will more than likely be a top 50 draft pick next week while reliever Gage Smith (60.1 IP/0.94 WHIP/4.62 K/9) can be used in just about every situation. This staff is coming off a great ACC tournament in which they allowed 6 earned runs on 21 hits in 26 innings striking out 23 and issuing 8 walks.

As a staff Alabama is not great, their strikeouts per nine is not strong (they do have groundball pitchers) but a walks per nine approaching four is bad for business especially when you have three teams in your region with strong offenses. The Tide are led by Spencer Turnbilll (87 IP/1.16 WHIP/6.10 K/9) who allows very few hits but walks an extremely large number of batters while All ACC honors were awarded to freshman reliever Thomas Burrows (33.1 IP/0.87 WHIP/8.64 K/9) .

Kennesaw State pitchers have been on the bad end of some horrid defense behind them, you are able to tell that from their poor fielding percentage and the fact that their pitchers have a high BABIP (batting average on balls in play). The do have some fantastic bullpen arms in James Connell (42.2/1.28 WHIP/8.53 K/9) and Justin McCalvin (56.1 IP/1.02 WHIP/8.98 K/9) , it will be very interesting to see how they are used if their starting pitchers find themselves in trouble early.

Boyd's World really likes the Noles this season and if healthy they are set to go far. The only other predictions I have seen that don't have Florida State advancing are ESPN's Kyle Peterson and Baseball America's Aaron Fitt, I am not sure what they see in Alabama but I have yet to find it. As mentioned before the Seminoles have probably the toughest matchup of any number one seed in the country, Georgia Southern has the bats and a solid arm on the mound today. Florida State has played very well of late, has better talent all around as well as experience, they are my obvious pick to advance out of the region.