Who's the Best Team in Your Lifetime?

I'm a man! I'm thirty! And what do men do? Football stats! That's what we do!

Share All sharing options for: Who's the Best Team in Your Lifetime?

I actually did turn thirty during this last football season.  And what better way to celebrate that, than to look at the most successful college football programs of my lifetime?  I couldn't have done this last year, because "The Best Team in the last 29 years" just doesn't have that special ring to it.  And next year would be too late, right?

So here it is, the most 'winningest' teams of my lifetime, the last 30 years:

Lucky for you, though, I've done a little more than just compile the records of the top 20 teams over the last 30 years. Because if that's all I did, that would be a bit boring, and really not all that useful.  And it would be a really short article with no real purpose for being here, other than to just point out to everyone else that their overlords are back.  FSU is back, right?  Plus, as of three sentences ago, the article would be over, and you'd be reading this just because it's here.

The 'more' that I've done is not just look at the most successful teams in the last 30 years. I've also tracked how they got there.  Was FSU always 1st? Was Oregon always 18th?

Specifically, what I've done is answer the following question:

"Who had the best record over the last X years?"

However, I hope that nobody will confuse my label as 'Winningest' or 'Most Successful' to be the same as 'Best'. 'Best' implies quality, which would necessarily need to factor in strength of schedule, margin of victory, national titles, etc.  Which I would never put Boise near the top of that list.

Thanks to stassen.com I was able to compile this data. That's a great website that has lots of neat functions that you can manipulate, and I'd recommend you visit their site and fiddle with it. After getting the data, I grabbed the top 20 winningest teams of the last 30 years and graphically displayed how they got to their ranking.

To demonstrate my methods, I picked two teams that represent the opposite paths to their destination: Tennessee and Oregon. 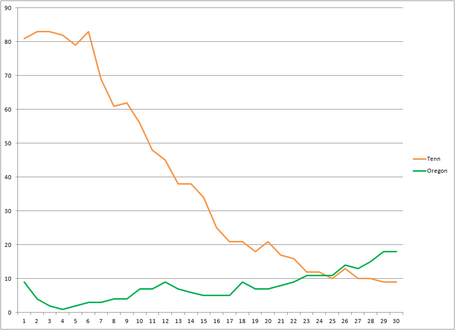 Tennessee made the list, coming in as the 9th most successful team in the last 30 years. But look how long it takes to get there. In 2013, they tied for 81st in their winning percentage.  And only once in the last 5 years do they break the Top 80 winningest teams. They're not even among the Top 50 winningest teams of the last decade. Twenty years out, they're still not in the top 20. They don't crack the Top 10 until you include the last 27 years.  Their cache is running out.

Oregon, on the other hand, squeaked on the list, coming in as the 18th most successful team in the last 30 years. However, their path is quite the opposite. You'd have to go back and include 23 seasons for Oregon to not make the Top 10. And not once do they fall outside of the top 20, a claim that can only be made by 3 other teams: Ohio State, Oklahoma, and LSU.

Side note: If you take Oregon's rankings according to this exercise, and average them, their average rank is 7.8, the third best behind only Ohio State and Oklahoma.

Additionally, Oregon is one of only 5 teams that can currently claim to be "the winningest team in the last X years." (stopping at 30 years): Oregon, Alabama, FSU, Ohio State, Boise St.

Oregon is the winningest team in the last 4 years.

Alabama is the winningest team in the last 3 years, the last 5 years, and the last 6 years.

Boise State, as mentioned above, is the winningest team in the last 7-17 years.

Here's all 20 teams together in one graph 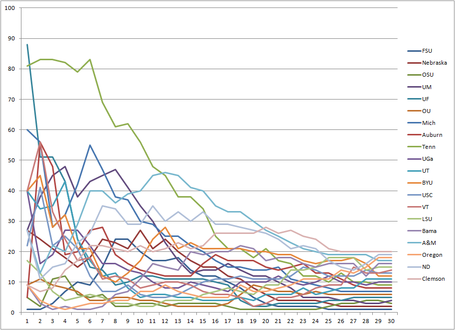 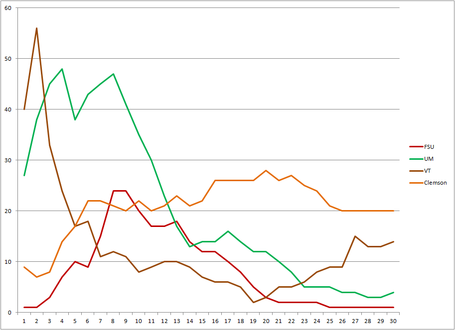 FSU holds the #1 spot of the last thirty years thanks to its dominance during the dynasty years. There's quite a peak in the middle of its graph, thanks to the 'Lost Decade.'   (Stassen.com accounts for all of FSU's vacated wins from 2006 and 2007, making the peak a little higher than what happened on the field, since the data for this graph has FSU going 2-12 in those 2 years). But with FSU recruiting like they currently are, and with the favorable schedule they enjoy, FSU might once again run away with the #1 spot.  ::insert Winston police juking crab leg running joke here::

Miami (Florida) needs to do some work soon.  They don't get into the top 10 until at least 20 years into the data. Al Golden has wisely ridden the NCAA cloud for 3 years. Now that the matter is finished, he is using the change as his "true start" to rebuilding the program. Meanwhile, Cane fans are going through some classic double-think, as they continue to claim that FSU outrecruiting Miami over the last 3-4 years 1) hasn't happened, 2) doesn't matter, because Ed Reed was a 2-star, and 3) will now be corrected since the NCAA isn't positioned to hammer them.

Clemson has a nice trajectory in recent years as one of the few teams to spend any significant time ranked lower than where they finish for the 30-year winning percentage.  It will interesting to see if their apparent dedication to playing 'big boy' football continues with on-field success, or if they slip back to their seemingly historical average (around 20th).

Virginia Tech: If we did a rolling 30-year success rate, VT's rank in this setup would probably improve in the next decade as they had some rough years in the late 80s/early 90s, (going 24-40 from 1987-1992) and those years would roll off their record. They need to stop the bleeding soon, though, to stay in the top 20 long term. 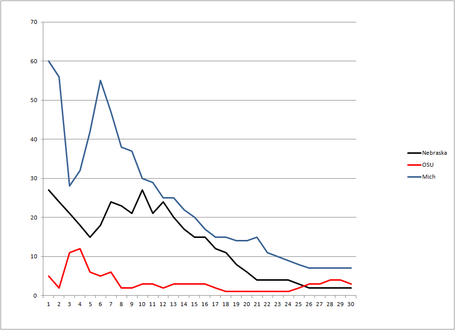 Ohio State:  Hey, they're good.  They've always been good.  They'll probably always be good.  If you averaged their rank from this exercise across the 30 years, Ohio State comes in at 3.3, the only team to have an average rank in the Top 5.

Nebraska: Much like many of the teams who finished in the top 10, Nebraska takes quite a while to get there, not cracking the top 10 until 19 years out. They're currently on a streak of six straight seasons finishing with 4 losses. It will be interesting to track if joining the Big Ten ultimately helps or hurts Nebraska's program when it comes to winning percentage.

Michigan, your graph. Woof! Michigan held the title of "Winningest team in college football" through the 2012 season, though they were edged out by Notre Dame this year. Will they be able to reclaim that spot? Better yet, will they even make this list in 15 years? Michigan doesn't break the Top 20 barrier until 15 years into this data. Another decade like this last one, and they'll likely see themselves on the outside looking in. 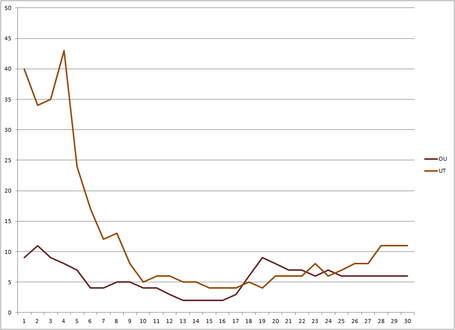 Texas: Universally considered one of the top 3-4 college football jobs, Texas winning percentage doesn't match-up in the last 30 years. Further, in this exercise, Texas only leads Oklahoma in 6 of the 30 years. Good luck, Charlie 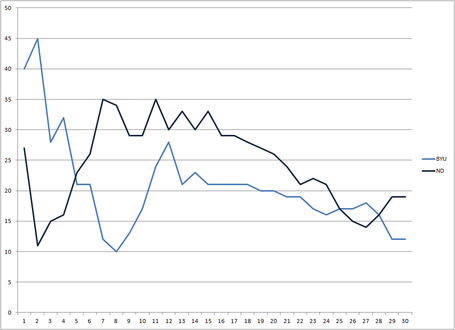 As mentioned above, Notre Dame gained the title "Winningest team in college football history" during the 2013 season. But in this exercise, they're anything but impressive, relying on the weight of history to claim that honor. In fact, in this exercise, they don't crack the Top 10 even once.

Does anyone care about BYU? They don't even count as a Power5 opponent for ACC teams. 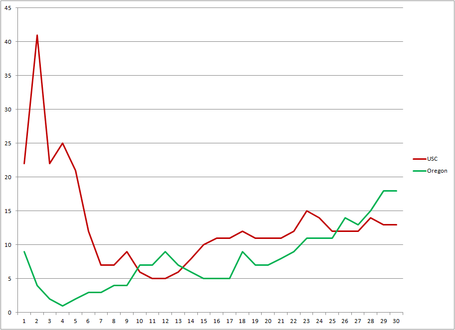 Traditionally, the Pac12 is USC's conference. But this exercise begs to differ. While USC still edges Oregon at the end of the span, coming in at 13th to Oregon's 19th, Oregon spends more than two-thirds of the period ranked above USC. In another decade, USC might not catch them at all if they don't turn it around 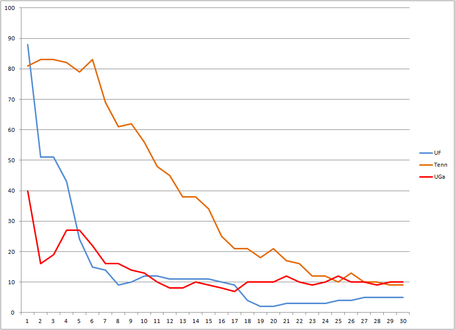 Florida: UF holds the distinct honor of having the worst 2013 record of any team that made this list (4-8: tied for 88th. "It's great, to be, a 4 and 8er"), barely edging out Tennessee (5-7: tied for 81st). As an FSU fan, I can't decide whether to claim that FSU (handing them their 8th loss of the season) is the team that pushed them into 1st in that category, or whether it was the injury-decimated Georgia Southern squad that led them to their achievement. Nevertheless, UF quickly rises in the rankings, going from the 88th to 9th in just eight years of data. Plus, Muschamp will surely turn things around, right?

Georgia: If you had asked me, "Who are the top 10 winningest programs of the last decade?" without looking at any data, I probably would have put Georgia on there. But Georgia (and UF and Bama, for that matter) doesn't make the cut. I'm sure that Georgia will correct some of their issues and get back to what looks like their program average: 10th 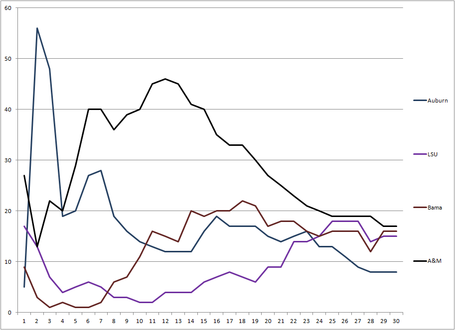 Auburn finishes eight spots ahead of Bama, and I'm sure that's about all they care about, so that's all I'll say.

Alabama: Saban's continued reign (along with his efforts to manipulate the rules) will likely continue to push Bama further and further up this ranking in the years to come.

LSU: Les Miles said, "Louisiana has a heritage of great players that play their high school football within the boundaries of Louisiana." And the university is no different. Finishing the chart at 15th, LSU is one of the few teams to spend most of this exercise ranked better than where they finish.

Texas A&M only spends time in the top 20 of this exercise in the first 2-3 years and the last 4-5 years. Winning seems to be on the rise, and whether that's due to improved recruiting in the SEC, or an easier schedule in the SEC West, that's yet to be seen. It will be interesting to watch Texas A&M's path after losing Heisman QB Manziel.