Is the gap between Florida State and the ACC as big as it was in the 1990s?

Share All sharing options for: Is the gap between Florida State and the ACC as big as it was in the 1990s?

Jimbo Fisher said at this week's ACC Kickoff that the ACC had as good a year as any conference in history. He noted the ACC had the national champion, another BCS bowl winner, and 11 teams with winning records. He pointed to the ACC having more players drafted in the top 150 picks than the SEC.

And yet Florida State was so dominant it overshadowed most of those accomplishments.

"You could argue, and I don't like to go back, but that team was as dominant as any team in college football [history]," Fisher said of his 2013 team, while also being quick to praise the rest of the ACC. "That team could run the football, it could throw the football short, it could run it deep, it was physical, on defense it could stop the run, the pass, and had tremendous kicking game and return game. That team, to me, is one of the all-time great teams. I really believe that."

Florida State scored more points than any team in NCAA history. And within the ACC, it outscored opponents by 313 points in the regular season. Compare that to 239 points, which is the average by which FSU outscored its ACC opponents from 1992-2000.

That got me to thinking: is the gap between Florida State and the rest of the league as big or bigger than it was during the 1990s? The league looks much different than it did back then, having added Miami, Virginia Tech, Louisville, Boston College, Syracuse and Pitt, and lost Maryland.

"It seems like an easy question to answer on the surface, but harder to quantify when you dig deep," said Eric Luallen, who played for Florida State until 1989, stayed connected with the Seminoles, and is now the baseball analyst for the school. "Part of that is due to trying to compare a one-, two-year cycle (2013-2014) to a nine-year time period (1992-2000). It is also a more difficult answer due to the expansion of the league from nine teams in 1992-2000 to 14 teams presently."

Before attempting to answer, let's review just what Florida State did under Bobby Bowden from its first year in the league, 1992, to 2000:

To answer the question, I went to three sources: Las Vegas bookmakers, coaches who coached against Florida State in the '90s, and former players.

Up first are the sportsbooks. Using numbers from Goldsheet.com, I took the average of the lowest FSU five point spreads from each year's ACC schedule, 1993-2000 (1992 data is unavailable).

The average FSU point spread in the five toughest ACC games on a yearly basis from that time: 22.3 points.

Clearly, that is significantly less than the dynasty-era Seminoles faced in their tougher ACC games. Of course, Vegas took a while to adjust to the level of the Seminoles, notably after Florida State set the national record for a win over a ranked team (63-0 over Maryland) and pulled its starters while up 51-7 at eventual 11-win, Orange Bowl champion Clemson. FSU far exceeded Vegas' expectations, going 7-2 against the spread.

The Las Vegas Hilton and Golden Nugget, as well as some other online sportsbooks, have posted their lines, and Florida State's five toughest ACC games average out to a spread of 21.6 points. That's almost identical to the 22.3 number the Seminoles faced in their dynasty years.

"It can be done," Jimbo Fisher said of winning another national title. "It was done last year, so why can't it be done again this year?"

Two current head coaches in the ACC were either coaching in the league or faced FSU at the time Florida State ran roughshod through it: Virginia Tech's Frank Beamer and Miami's Al Golden. Beamer faced Florida State five times from 1988 to 2000, losing all five times, but only one of those times came from 1992-2000 -- the loss in the 1999 national championship game. Golden was a defensive graduate assistant at Virginia from 1994 to 1996, coaching on one of the two ACC squads to beat Florida State from 1992-2000.

Even for these coaches, it's a tough question.

"I'm not sure about that. I think they were an exceptionally talented team last year that had a great leader at quarterback, and the team got coached up really well and had a great run. But I think all of us will realize you gotta get better to beat a team as good as them."

Golden was quick to mention facility recruiting upgrades and more teams in the conference investing in football, plus players more willing to play at a greater distance away from home, in defense of the rest of the ACC.

"And I think, if you look at the league, we go back a long way. Looking at the league then, when you used to travel to Charlottesville, they didn't have the indoor [facility], and you go down to North Carolina and they didn't have the stadium and the facilities, and I think there is more opportunities in the league now than maybe there was then. And the geography has shrunk, so kids are more apt to travel now and go to different places. So I don't think the gap is as wide. And that is not diminishing what Florida State achieved last year, because they achieved significant things."

Bruce Feldman of Fox Sports spoke with an anonymous ACC coach, who said some things that wouldn't be out of place coming from the biggest of Florida State partisans:

One ACC coach I spoke to Monday said he was blown away by what he saw from the Noles last year and suspects that about half the league's teams do not have one player who would start for Florida State right now based on what he sees on film. He also doubted whether many of the players the schools brought with them to Greensboro would be good enough to start for the Noles this year. "That team is ridiculously talented," the coach said.

Florida State's former players are also mixed in their answers.

"While the numbers may not ultimately support my opinion it just feels like Clemson, Duke, Miami, Virginia Tech and Louisville have the potential to be a better test for FSU than the group of teams that used to occupy the second tier to middle of the pack in the ACC from 1992-2000. At the bottom, not sure there is much difference today with Virginia, NC State and Wake Forest when compared to the teams that used to occupy the bottom rung back then." 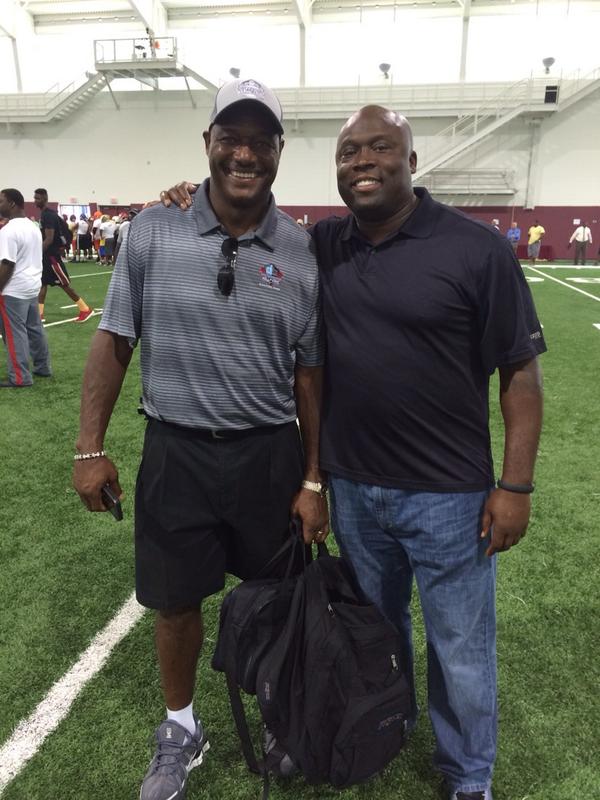 Former Seminole Corey Fuller, now coaching at Florida A&M High School in Tallahassee after starring for FSU from 1990-94 and playing in the NFL from 1995-2004, says it is tough to compare the two eras because Miami was not in the ACC when he played.

"For anyone who played for Florida State in the early '90s, that was the game," Fuller said. "We knew we would beat everyone else and of course the ACC. The focus was on Miami. When I was in the NFL, I'd have other players tell us how they'd hurry back to the dorms to watch Florida State and Miami!"

But Fuller gives the current Seminoles their due.

"I think they're as good or better than a lot of our teams," Fuller said. "What Jimbo and his players have going right now is special."

Debating is one thing. But whether Florida State, or any team for that matter, can go on a similar run is another question entirely. And it's one I asked Fisher at ACC media days.

"Why can't you?" Fisher responded. "I don't know if it's feasible,or doable, but let's go play ball and find out. I think it probably would be tougher now. I think more people are playing ball than have ever played, but anything is possible."

Even if Fisher's Seminoles can capture a third straight ACC championship, they would still only be a third of the way to the '90s dynasty's nine conference titles.

I tend to agree with Fisher and others who raised the point that keeping that level of dominance year in and year out is almost impossible in any league, due to premier players more often looking to lesser programs for early playing time. Even if the gap is as big as it was, it seems unlikely to remain at that level for such a sustained period of time.

But if the Seminoles get another national title ring to go along with that, Fisher would become the first coach since Barry Switzer in 1974 and '75 at Oklahoma (or Pete Carroll at USC, if you're into AP titles)  to begin a head coaching career with two titles in his first five years.

Vote in our poll and then tell us what you think in the comment section.

Next Up In College Football