Share All sharing options for: Florida State fans beg for a transfer punter on twitter: Is Sean Kelly coming?

Florida State's program is in a pretty good spot right now. There are NFL players in every position group, the team is favored by at least two touchdowns in every game by the early Las Vegas odds, and the coaching staff returns pretty much intact.

But there is a weakness on this team that stands out like a sore thumb: punting. Florida State was 116th in punt efficiency in 2013. Granted, it seldom punted, but against very good teams, like, say, Auburn in the national championship game, it almost cost Florida State the win.

It's simply unacceptable to be 116th in punt coverage when you have the caliber of athlete running down in coverage that Florida State puts on the field.

Jimbo Fisher at ACC media days was positive about punter Cason Beatty, saying that he was encouraged by the way he was hitting the ball in practice, but FSU fans have twice seen preseason praise of Beatty go unfulfilled, and are skeptical.

In early June, it was announced that FAU punter Sean Kelly, a second-team All-Sun Belt selection, was leaving the program. No reason was given, and information has been scarce. It was also not known if Kelly would be immediately eligible at another school, either by way of having completed his undergraduate degree, or via some waiver exemption.

Sources have told Tomahawk Nation that FSU always considers and evaluates transfer options.  And while kicking the tires doesn't always result in anything, FSU does have several unused scholarships.

FSU fans are very active on twitter, but they aren't notable for tweeting recruits (like, say, Tennessee or Alabama fans). But even they recognized the need for a punter, and hit Kelly up. A lot. A PUNTER. 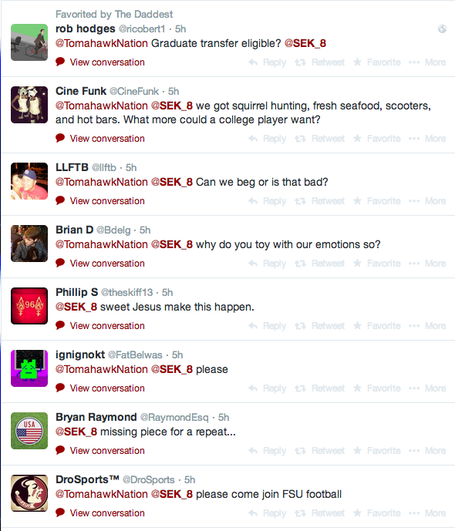 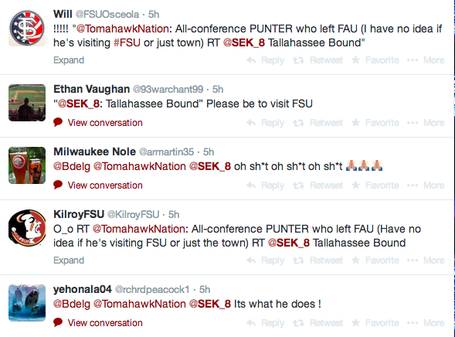 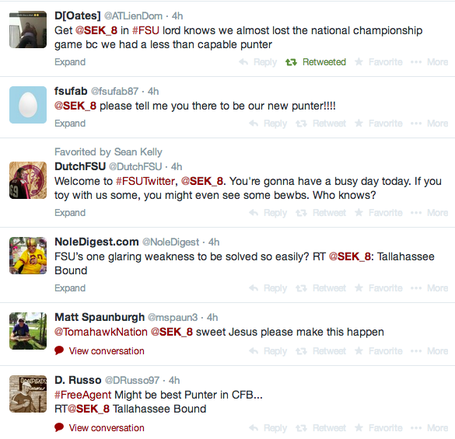 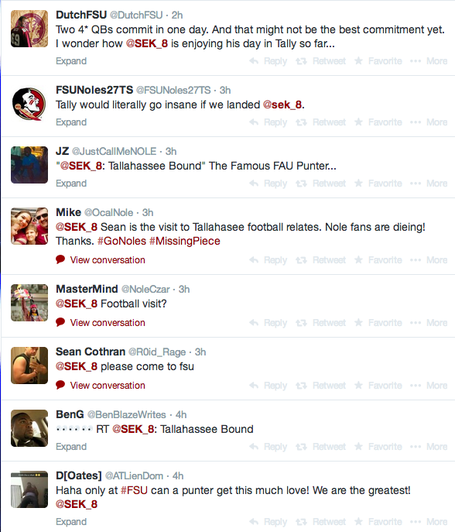 All that over a punter. Have to give credit to Florida State fans, they know their team.

I caught up with Kelly for a quick interview. He confirmed that he is indeed in Tallahassee for orientation -- but at Tallahassee Community College (TCC), not Florida State. Because he is not a graduate transfer, he is not eligible to play at an FBS school in 2014, and it's cheaper to sit out the semester at TCC. Citing personal reasons, Kelly wouldn't elaborate on why he left FAU, noting only that he is in fine academic standing.

But is Florida State still interested? Yes, Kelly confirmed, along with South Carolina. "I've called a few schools, but those are the two calling me back," Kelly said. Kelly said that it would be easy to transfer from TCC to Florida State, but that he has interest in both schools. He does plan to be a spring enrollee wherever he goes, and has applied for the spring semester.