Tomahawk Nation is previewing the Florida State Seminoles 2014 season with a series of roundtable responses. Our authors chimed in on questions that piqued their interest.

ricobert1: Rashad definitely breaks the receptions record this year. He's had 38, 57, and 76 receptions in his first three years. He's an important veteran in a corps without Benjamin or Shaw this year, but with Jameis. Yes.

Put me in the "no" camp for breaking the all-time yards record. His 1,128 yards last year came on 76 receptions. I don't think he'll increase on enough numbers there to break 1,141.

I want to say yes, but again I'm in the "no" camp for the touchdown records. He set a career-high last year with nine, eclipsing his freshman campaign seven touchdowns. I think he'll become a more important target for Jameis - but I think defenses will respond by bracketing him in coverage more, especially in the red zone. 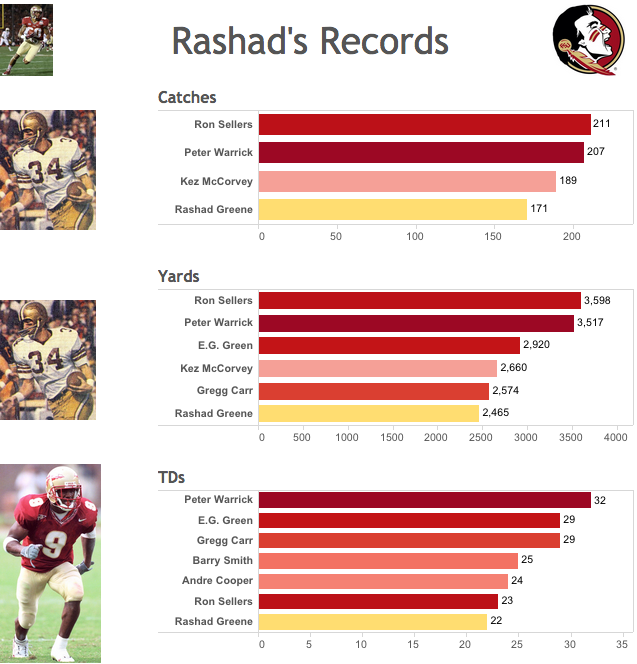 pbysh: I think receptions are a lock, assuming a full season. His catches have gone 38-57-76 his three years here and this year should probably be more of the same for him. As much as I would love for him to break the other two, I think he will probably fall agonizingly short, even though Benjamin and Shaw are gone. This will result in Shad having other teams focus on him, something he has struggled with in the past. This will ultimately help other players, such as maybe Rudolph, having very solid seasons, but I think Rashad will probably end up at roughly 1k yards and 9 TDs. If FSU makes the playoff and gets that extra game, he'll probably break them both.

FSU: Because we're talking about just the raw numbers here and not pace adjusted, one consideration to keep in mind is the number of possessions that Florida State might get this season as it's defense plays against many HUNH teams. A thing to keep an eye on is will this give not only Greene, but the rest of the skill players, more bites at the apple, in terms of raw offensive statistics. But as far as Rashad goes:

Yards: Tough call, but with 14 games seeming probable and 15 games a decent possibility, I think he gets it. If FSU plays 15 games, that's only 76 yards per game (he averaged over 80 per game last year, despite sitting out many second halves), and you know Big Game Greene will go for at least 100, or even 130, in a couple games under the lights. This leaves some room for "error" when FSU has a couple games where it doesn't throw the football much after halftime.

TDs: No. O'Leary will steal some red-zone looks, and I suspect FSU will be running the ball more down close given our stud OL. Plus, do folks really think it can score 84 offensive TDs again? I'm guessing he ends up with 8 or 9.

Bud Elliott: The receptions are a lock if he stays healthy. That's only 3.4 per game in the regular season, and less than three per game if FSU plays 14 contests.

The yards and touchdowns are much tougher, and involves judging how much longer FSU will be in games (assuming smaller blowouts and more close games), and how to determine Greene's targets given that Kelvin Benjamin and Kenny Shaw are gone. Will teams be able to take him away more thanks to greater focus? How does that balance with being the only proven target at receiver? Greene is not a great red zone target.

To achieve the records, Greene will need to average 95 yards/game and 11 touchdowns in 12 games. But, if FSU plays 14 games, Greene would need only 81/game and three touchdowns every four, essentially.

Onebarrelrum: I’ll be optimistic and say yes to all 3. Certainly he’ll break the receptions record. A lot of Rashad’s production will depend on the productivity of the replacement WRs. If opposing teams can double bracket him all game because the other WR spots are struggling, he won’t do as well. However, it works both ways. With Winston slinging the ball and Shaw and Benjamin gone, he should still get plenty of targets.