We are very fortunate to have a network of team specific blogs to work with during game weeks. Unfortuantely, The Citadel, The Military College of South Carolina, has yet to jump aboard the thundering locomotive that is SB Nation. Take the leap, Citadel writers. We're not all completely unhinged.

As a result, this week's guest is your own DKfromVA, who possesses very little knowledge of the illustrious military college of Charleston, but does have an internet connection, a working knowledge of Wikipedia, and a good attitude. So, today we'll learn a bit about The Citadel, and maybe, just maybe, something about ourselves along the way. LOOK SHARP THERE WILL BE A QUIZ.

The Citadel was founded in 1842 in Charleston, South Carolina. Life at the school during this time does not sound like fun.*

"Life as a Cadet at the Citadel Academy was Spartan and demanding with little time for idle pursuits. A typical day would begin at 0600 hrs (6AM) and end at 2130 hrs (9:30PM) during the winter months, and at 2230 hrs (10:30PM) when the days were longer. Academic classes and military drill and duties took up most of the day, with evenings devoted to study. Saturdays were reserved for inspections. From March 1 until December 1, there was infantry or artillery drill each day except Saturdays and Sundays. On Saturdays, in addition to room inspection, there was inspection under arms, and on Sunday attendance at church services was mandatory."

*Though to be fair, life in general anywhere in 1842 probably wasn't great.

As you might surmise, The Citadel played an important role during the Civil War, including its Cadets firing the first hostile shots of the conflict, and many current and former students were lost. After a 17-year post-war um, hiatus from operation under its own leadership, the college reopened in 1882. The Citadel grew by leaps and bounds and has continued to contribute to every American armed conflict since. The College has maintained its Spartan program and curriculum to the present day. The first African American Cadet entered The Citadel in 1966, and the first women in 1996. It has a current student body of about 2,300 undergraduates. 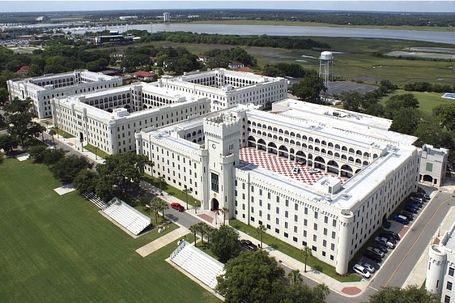 In 1905, The Citadel began to play the game of American football. It nicknamed its team the Bulldogs. The Citadel boasts an all-time record of 468-529-32, with 3 playoff appearances and 2 conference titles. It is currently a member of the Southern Conference, as is fellow military college Virginia Military Institute. The Bulldogs play their home games at Johnson Hagood Stadium, which opened in 1948 and seats 21,000. The Citadel practices on artificial turf. Rick Reilly wrote an "expose" on hazing in The Citadel's football program in 1992. Hazing is bad, but so is Rick Reilly. This was likely a secondary sting to famous alum Pat Conroy's less-than-favorable, if veiled, characterization of the college in "The Lords of Discipline." The Citadel has beaten Clemson 5 times and has beaten South Carolina 7 times. The Bulldogs reached the second round of the 1-AA playoffs in 1992, finishing at 11-2 and ranked #1 in the final regular season 1-AA poll.

The current Bulldogs are coached by Mike Houston, who is in his first season at The Citadel. The Citadel has been an option team for three seasons now, finishing 4-7, 7-4, and 5-7 in 2011, 2012, and 2013, respectively. The Bulldogs are coming off of a 31-16 week one loss to Coastal Carolina, in which they rushed 65 times for 358 yards, and were 1-8 passing for 19 yards. They surrendered 170 rushing yards and 263 passing yards. They somehow fumbled 8 times and lost none of them! Aaron Miller and Tyler Renew each received 20 carries, while Vinny Miller and Jake Stenson each received 10. Aaron Miller is the quarterback. Julian Baxter had 10 tackles, 6 of which were unassisted. The Citadel has a color scheme similar to North Carolina.

1. Which of the following is the name of a player for The Citadel?

Green. All of the Above

A. Has his number retired at The Citadel

2. Was a NFL running back and return specialist for the Cardinals and Chiefs

D. Compiled a coaching record of 14-42 over 5 seasons with Morgan State and Southern University

IV. All of the Above

3. All of the following are former head or assistant coaches at The Citadel EXCEPT

4. If Florida State does not defeat The Citadel by this many points, I will compose a passive-aggressive comment about Jimbo being conservative rabble rabble Beatty rabble tradition uniforms rabble

IV. Ain't no amount a points gon' stop me from that one let's be real

5. I read all of the above nonsense.

A. True. Thank you, DK, this was a worthwhile experience.

2. False. I will leave and not return until I receive a personal apology via e-mail and a refund of my subscription fee and who has DK even PLAYED anyway

**Bonus for those of you who have read this far. The Citadel features an offensive lineman with measurements of 5'9", 295. You absolutely will not guess which TN staff member pointed that out to me.