It was January 1991 and the Noles were fresh off a 27-14 victory against Penn State in the Blockbuster Bowl. I attended this game in Joe Robbie stadium and watched Casey Weldon, Amp Lee (game MVP), Lawrence Dawsey, T-Buck, and Shade Tree do work. It was a great atmosphere with Chief Osceola and Renegade also making an appearance while the two legends coached their respective squads. The Seminole players and fans celebrated as the clock ticked to zero.

A few days after the game, I was flying from Miami back to San Antonio and then driving to Del Rio, TX where I was stationed in the Air Force. I went to a cafeteria type restaurant during my layover in Memphis. As I grabbed my tray and entered the line, I glanced at the folks ahead of me and saw Bobby and Ann Bowden about 15 feet away. I realized I was wearing my "Seminole Football" T-shirt and decided to say hello. I called down to him and said "Hey Coach" and opened my jacket so he could see my shirt. Coach Bowden immediately walked to me, shook my hand and said "Hey Buddy." He just left Ann there standing in line! I introduced myself as a FSU class of 86 grad and he got a big smile. He asked what I have been doing since graduation and I explained how I was an instructor pilot in the Air Force and was responsible for training on the new USAF pilots. Coach Bowden immediately asked me if I was going to Desert Storm and I told him unfortunately not since my job was training the pilots. He said what I was doing was also vitally important, which made me feel really good. About this time, Ann had reached the cashier and called to Coach Bowden to come pay. He said "I will get it when I get down there" and then asked me where I was headed. I laughed and told him Del Rio, TX and he goes "Where in the world is that?" We laughed.

Realize we didn’t have the internet, social media, TN or any other round the clock coverage of sports in 1991. Living in TX, I had to rely on the USA Today and weekly edition of The Osceola newspapers to get any Seminole Football information. The Osceola did a pretty good job of covering recruiting and I was aware of some of the big names Coach Bowden was pursuing. So I said to him "Hey Coach, it looks like recruiting is going well and we might get some big time guys." He looked around as if to see if anyone was listening, leaned in close to me and said "We gonna get some good ones." He was right! The 1991 recruiting class saw the USA Today offensive and defensive players of the year (RB Marquette Smith and LB Derrick Brooks) plus names like Derrick Alexander, Devin Bush, Clay Shiver, and Tyrant Marion.

By this time, we paid the cashier and were walking toward the table where Ann was sitting. I shook Coach Bowden’s hand told him how proud I was to be a Seminole and thanked him for everything he does for Florida State University. He thanked me for my service and said God Bless.

I recounted our conversation for the entire trip back to Del Rio. Coach Bowden has a way of making you feel so comfortable within five minutes of meeting him. It felt like I was meeting a long lost uncle that was so easy to talk to and so understanding. It is easy to see why he was so successful recruiting, coaching, and developing teenagers into men. A few days after returning to Del Rio I decided to write a short letter to Coach Bowden. I wanted to let him know how much I enjoyed meeting him and wish him luck for the upcoming signing day. I also told him how proud I was that he was our Coach and what a great representative he was for FSU. About ten days after sending my letter, I received a large envelope in the mail that said FSU Football on the return address. I immediately opened it and found this picture. 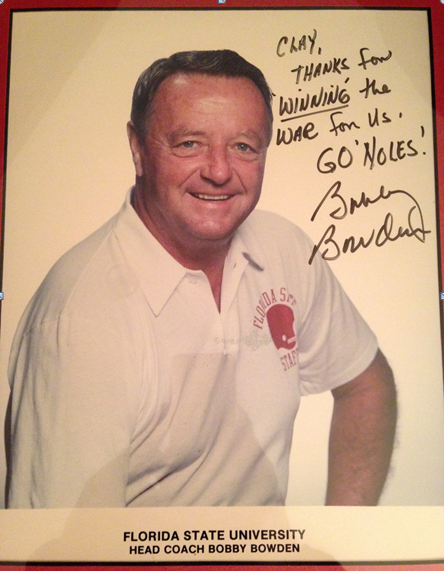 It was overwhelming to me that Coach Bowden would take the time to write those specific words. Being a training instructor pilot and not participating in the war was extremely difficult for me. I spent many nights praying for those I taught in hopes their skills would keep them safe. Deep down I believe Coach Bowden’s sensed this and was so thoughtful in his message. It really meant the world to me. I wanted to share this story on the 25th anniversary of meeting the greatest college football coach and one of the best people in the world. Go Noles!!