It is cool – really cool. Here is a short story about how four Seminole grads were fortunate enough to organize and execute a fly-by before the FSU vs Louisiana Tech game on Oct 22, 1988.

Many of you TN readers are familiar with the name Billy Francis. Billy currently does a fantastic job leading the Veterans program at FSU. Well, thirty years ago Billy and I were completing four years in the FSU Air Force ROTC program and becoming 2Lts in the USAF. Billy and I started pilot training at Laughlin AFB in Del Rio, Texas on Oct 3, 1986. One of the T-37 instructor pilots was 2Lt Scott Taylor, an 85 FSU grad and fellow ROTC cadet. Scott had completed the 11-month pilot training course shortly before Billy and I arrived. Scott was selected to be FAIP (or First Assignment Instructor Pilot) and remained in Del Rio. Billy and I completed pilot training in Sep 1987 and were also selected to be FAIPs (even though both of us really wanted to fly the F-16!).

The four month FAIP training program was conducted at Randolph AFB in San Antonio. This program involved Billy and I flying with very experienced T-37 instructor pilots that would simulate common student mistakes (it was quite eye-opening, especially the spin rides where they purposely put the aircraft in an out of control situation and then misapply the recovery procedures!). One day, the T-37 Squadron Commander, Lt Col Brooks came down and flew a mission with us. During the mission debrief, we found out he was an FSU Grad (unfortunately, I cannot remember his FSU class, but believe he would have graduated around ’66 - ’68). Of course, the conversation immediately turned from flying to football and we talked about the upcoming season. Lt Col Brooks then said something along the lines of "wouldn’t it be cool if we could do a fly-by before a game?" Billy and I immediately said yes and Lt Col Brooks said he would make some phone calls to the Pentagon. Billy and I finished the training program and returned to Del Rio in April ’88.

On Sept 3rd, the Noles opened up the season and got manhandled by the Canes 31-0. Billy and I shockingly watched together from Del Rio and thought maybe the rap song wasn’t a good idea. A week or so later, we received a call from Lt Col Brooks saying the fly-by was approved and that he would talk to our Squadron Commander to make sure we could go. Scott Taylor, Billy Francis, and yours truly departed Del Rio in three T-37 jets on Oct 21, 1988. We rendezvoused with Lt Col Brooks in San Antonio and flew to Tyndall AFB in Panama City to spend the night.

Gameday! Lt Col Brooks began the mission pre-brief by saying "it is a great day to be a ‘Nole!" We were all so fired up. Then Lt Col Brooks discussed the mission aspects to include the coordination with the FSU Football Operations Office. Following the briefing, we stepped to our jets and launched exactly on time. Lt Col Brooks was #1 and formation lead, Lt Scott Taylor was #2, Lt Billy Francis #3 and Crawdad was $4. We proceeded from Tyndall to our orbit point about 10 miles NW of the stadium. While in the orbit we contacted Seminole 1 on the radio. Seminole 1 was Billy Francis’ father (a retired US Army Colonel) in the stands with a UHF radio. Billy’s dad was a riot on the radio! Each call to us ended with a "how copy, over" question. We flew in the orbit for approximately 15 mins when Seminole 1 came across stating "the band is about to start the National Anthem" then about 10 seconds later, "Seminole 1 reports the band has started the National Anthem, how copy, over." My adrenaline started pumping in overdrive. Our mission required us to begin our flight to the stadium 30 seconds after this call. Lt Col Brooks, as the formation lead pilot was responsible for getting us over the stadium the exact moment the Anthem ended. As a wingman, you focus on the aircraft next to you with an occasional glimpse of where you are going (we only have 3 feet wingtip clearance between aircraft). After a minute or so, I hear Seminole 1 say "I got you in sight—looking good, the band is almost done—timing looks good, over." I don’t know if I ever concentrated so hard in an aircraft over the next 30 seconds or so—I wanted to be in the perfect position. A moment later, I took a quick glance down and saw Doak go beneath us and then relaxed just a bit. It was awesome. Seminole 1 reported "Perfect timing!! You guys looked great!! How copy, over." Lt Col Brooks came on the radio and thanked Seminole 1 for a job well done and we headed to the Tallahassee airport.

Immediately after landing, we secured the jets and headed to the stadium. Lt Col Brooks secured parking passes and we were able to pull right up to the gate. We jumped on the elevator and headed up to the VIP area. We received many great comments from the boosters and faculty. It was also really cool to meet Billy’s Dad (aka Seminole 1). I then headed to the stands where my parents and brother were sitting. They were all so proud. Of course, the Noles were crushing Louisiana Teach 28-0 when we got there at the end of the first quarter, but that really didn’t matter—we had a lifetime memory. Go Noles! 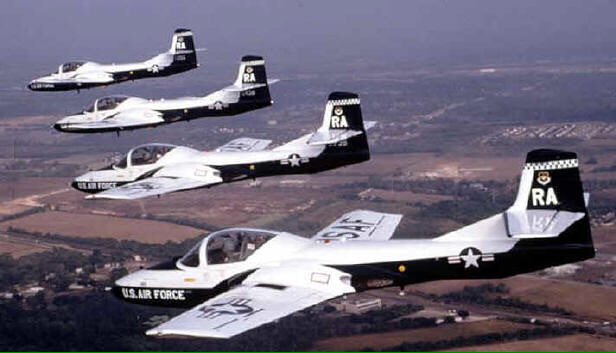