The Seminoles took their spring game on the road and still brought a bigger crowd than UM's average home crowd during the regular season.

The Florida State football team was forced to host its annual Garnet and Gold spring game in Orlando this offseason due to renovations deeming Doak Campbell Stadium unavailable. Even with this, the Seminoles still saw a solid crowd there to support them in Central Florida.

The crowd here at the Citrus Bowl just before game time. pic.twitter.com/MnpeqIKZju

Now compare this attendance, with more than 40,000 seats sold before the day of the game, with the crowd at one of the Miami Hurricanes home games from last season. 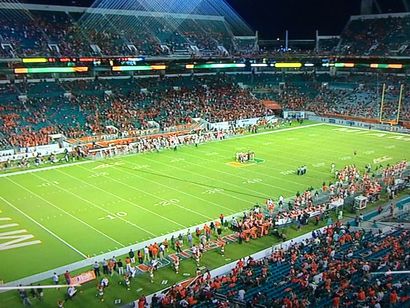 This picture was from Miami's thrilling game against Nebraska last year. What makes this worse? It was just before overtime began. Think this is the only lacking crowd they had a season ago? This was Miami's senior day crowd.

Miami's seniors went through one of the toughest stretches in program history. The crowd for their Senior Day. pic.twitter.com/X7l7Mdcpw2

When it was officially announced at the spring game, Florida State had 49,913 fans at this year's spring game in the Citrus Bowl. For comparison, Miami averaged 47,560 people at their home games in 2015. This is an incredible example of the state of each of these two programs at the moment. There are lofty expectations of next year's FSU team and that shows in the spring game attendance while Miami is struggling to even get fans to home games.