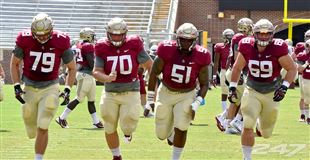 This is the first of a two-part series on the two most important units of the 2017 team: offensive line (OL) and wide receiver (WR). Entering the 2017 season the consensus is that the OL and WR units have the most question marks. As a result, the performance of these two units will likely have the greatest effect on the outcome of the team as a whole.

I’m starting with the OL since the performance of the OL affects the WRs (and not the other way around). That is, an OL that can’t pass protect will result in a less effective passing game. But before we make projections about the 2017 OL, let’s start with what we know.

We immediately notice that both R. Johnson and K. Are are gone. But I said that four OL were returning. The reason for this is that last year in game seven against Wake Forest Landon Dickerson suffered a season-ending ACL injury after starting in six consecutive games. Over the remainder of the season Kareem Are was one OL who replaced Dickerson at one of the starting Guard spots. So once we account for Dickerson’s return, there is really only one OL (LT - Rod Johnson) who started at the end of the season who isn’t returning.

First let’s look at some key unadjusted stats. It’s very important to keep in mind that last year FSU played 8 teams with top 25 defenses (!), i.e., Michigan, Florida, Clemson, NC State, Miami, Louisville, BC, Wake Forest, so one can expect this strong defensive schedule to negatively affect the OL performance. Having said that, let’s also look at these OL stats over the course of the 2016 season to look for any trends:

Again, these data should be contextualized appropriately given the really strong slate of defensive opponents, including the single December/January opponent: Michigan, which had the #2 D S&P. (Moreover, Deondre Francois was only a RS Fr and the speed of the game resulted in a tendency to hold the ball too long, which among other things tended to result in unnecessary sacks.) Making sense of the data in this way shows improvement over the course of the season at pass protection and allowing penetration in the backfield.

Now to gain a broader picture let’s looks at the key advanced metrics, which is a combination of adjusted and unadjusted stats. While FSU ended the season with the #2 S&P Offense (#4 Rushing, #12 Passing, #4 Explosiveness) these data likely don’t tell us a lot about the OL specifically, especially on passing plays. Yes, the OL had to pass protect enough to allow Francois to get rid of the ball. After that success depends on Francois and the receivers. With respect to the run game, however, these data can inform us about the OL despite blocking for the best RB in FSU history. And the way we know this is by looking at the 2016 Offensive Line Stats:

Again, it’s important to note that some of these metrics are adjusted (highlighted yellow), while some of them are unadjusted (highlighted green). Since some are skeptical of the Adjusted Line Yards (Adj. LY) metric, I’ll ignore it; and I’ll ignore the adjusted metrics for Standard and Passing Downs. Now let’s turn our attention to the unadjusted OL metrics (highlighted green). Again, when we look at the Unadjusted Sack Rates for either Standard or Passing Downs, these data dovetail with the unadjusted Sack Rate data above. For the other unadjusted data, first there is Opportunity Rate (Opp. Rate), i.e., the rate at which, according to Connelly, "the OL does its job". That is, this rate indicates the rate at which the RB avoids contact for at least five yards. Now, no doubt, with his uncanny ability to make defenders miss, Cook himself did contribute to FSU’s #27 ranking. But it is important to note that this rate requires no contact whatsoever with the RB in the first five yards, and so doesn’t include cases where there are broken tackles, which Dalvin was so good at. For this reason, it’s likely that while Dalvin deserves some credit for avoiding contact in the first five yards, the OL deserves more credit than the Cook for the high Opportunity Rate ranking. This means that the 2016 OL was very good at opening up holes for Cook.

The second key unadjusted metric is Power Success Rate, which measures "percentage of runs on third or fourth down, two yards or less to go, that achieved a first down or touchdown." FSU’s OL was top 10 in this category. And this comes as no surprise given the massive size of FSU’s OL. (It’s noteworthy that if Baveon Johnson ends up winning the starting position at Center, the 2017 OL will be even larger than the 2016 OL.)

After accounting for the absence of Dickerson (recovering from ACL tear) from spring practice, based on the spring the projected starting five are:

First off, this five is a projection. While Minshew, Dickerson and Leonard are virtually guaranteed to be starting on September 2nd against Alabama, it’s plausible that the completion for the starting spot at Center and Left Tackle will continue into fall practice. At Center the competition will continue because Eberle started last season but missed the spring due to recovery from hip surgery. At Left Tackle Josh Ball (who is replacing Rod Johnson) is only a RS Freshman and has only run with the ones for one spring, so it’s probably fair to say that he isn’t guaranteed the starting spot just yet. At this point I need to address a potential oddity, i.e., I said earlier that four starters are returning but in the projected starting five there are two new starters: Ball and Baveon Johnson. Again, Rod Johnson left for the NFL and so must be replaced. At Center, however, strictly speaking Eberle returns this year despite that he may not be the starter. Why didn’t I include Eberle in the projected starting five? First, Baveon was the #1 Center coming out of high school, so he was more talented than Eberle when each stepped foot on campus. Second, Eberle missed the spring recovering from hip surgery and Baveon took all snaps with the first team offense; and he looked good, e.g., showed improvement snapping the ball, etc. Last, while Eberle has shown a solid grasp on the offensive play-calling, he has struggled against some interior DL due to size and less so technique. Baveon is heavier than Eberle, which will likely prevent Baveon from giving up the same amount of penetration in the interior that Eberle allowed. The takeaway from all of this at Center is this: either Eberle returns, starts and shows the typical amount of improvement that any returning starter shows; or Baveon wins the starting job at Center, which means that overall he performs as good as or better than a returning, improved Eberle.

It’s also important to point out here that FSU has 16 OL on scholarship, many of whom are very talented or have playing experience. In other words, beyond the projected starting five FSU has some solid depth. For example:

· Center Alec Eberle – Eberle is a RS Jr with 19 starts and 29 appearances. Again, Johnson will need to beat out Eberle this fall to win the starting spot at Center.

· Guard Derrick Kelly Jr. – Kelly is a RS Jr with 4 starts and 6 appearances.

· Tackle Brock Ruble – Ruble is a RS Jr with 16 starts and 22 appearances.

· Tackle Jauan Williams – Williams is a highly touted RS Fr who will be competing for the starting spot at Left Tackle against Ball.

While any loss of a starter will result in some drop-off, FSU does have decent depth that would allow them to absorb a starter at Center, Guard or Tackle. The quality of the back-ups decreases from inside out, i.e., best depth is at Center (Eberle), the next best back-up (Kelly) is at Guard, and the biggest drop-off is at Tackle (Ruble, Williams).

Returning to the projected starting five, we notice right away that this is a big OL. That is, across the line the average height is 6-4.7 and the average weight is 310.6. Last year the starting OL average height was about the same but the average weight was slightly greater at 311.8. (Note that the weights for the 2017 projected starting OL are taken from the 2017 Media Guide and will change slightly by the fall.) It's important to note that while the average weight is about the same as last year, there is less weight at the Left Tackle spot in 2017 but there is more weight at Center if Baveon starts. Now when you consider how good the OL was last year at Power Success Rate (#8), and there are four returning starters all of whom it is reasonable to expect some improvement, and an overall greater average weight in the interior, it seems reasonable that FSU’s OL will be very good (i.e., top 10 or top 5) in short yardage situations again. I think it’s also reasonable to expect the 2017 OL to be good at springing the RB again (i.e., top 25 Opportunity Rate). But what about Stuff Rate (#72 in 2016)? Supposing that Baveon’s technique is adequate, the increased sized that he’d add to the 2017 OL will likely result in an improvement in the Stuff Rate in 2017, at least on the interior OL, where penetration in the backfield is most disruptive. Ball, however, projects to replace a two-time Jacobs Blocking Trophy (best OL in the ACC) recipient and first-team All-ACC LT Rod Johnson, so it’s guaranteed that there will be a regression at Left Tackle; a regression both at pass protection and run blocking. This, of course, will likely contribute negatively to every relevant run-blocking and pass protection OL category. That said, unlike on the interior OL, the regression at Left Tackle can be mitigated by offensive play-calling, adjusting formations, e.g., adding a Tight End, etc. So although the regression at Left Tackle can’t be eliminated, the extent of that regression can be limited by coaching. (An interesting question is whether Ball ultimately has a higher ceiling that Rod Johnson.)

The greatest contributing factor to maintaining or improving performance is returning production. Four-fifths of the OL returns. In addition, if my projected starting five turns out to be correct, the OL will be bigger in 2017, which would increase performance in run-blocking categories such as Power Success Rate, Stuff Rate, Opportunity Rate, etc. The only regression expected will be the result of Ball replacing Rod Johnson at Left Tackle. Again, however, this regression can be limited (at least situationally) to some extent by adding a blocking Tight End on the left side of the line. Last, it is important to note if my projected starting five turns out to be correct, then it will include only one upper-classman—and that upper-classmen has only one year of experience playing on the OL. And the five starters will have an average of 2.2 years on campus, with a combined 16 starts and 19 appearances. As we know, young OLs tend to make more mental errors, e.g., false starts, holding, etc. I do think, however, that if someone like Baveon is disposed to these sorts of mental errors that it’s likely that Trickett/Jimbo will start Eberle. Further, false starts tend to decrease as the OL plays together longer, so that the sooner that Trickett/Jimbo decide on a starting five and the more the OL can remain injury-free, the fewer the false starts.