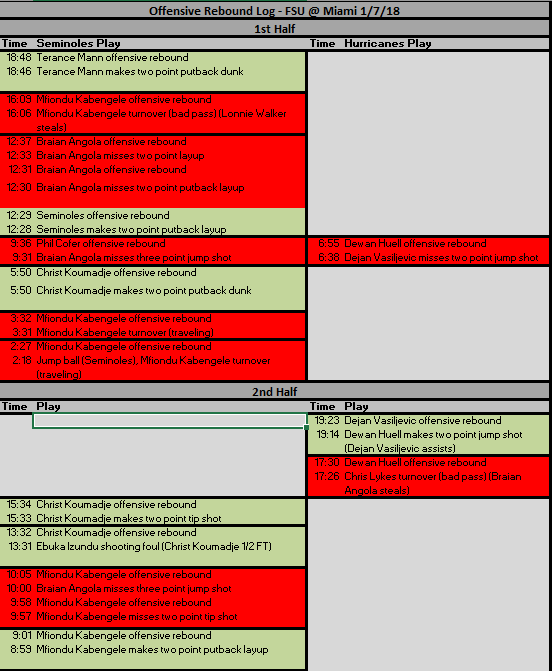 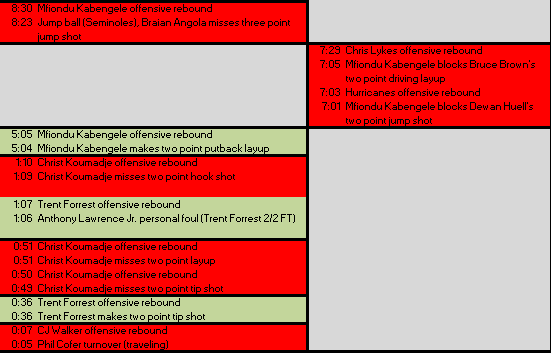 Miami was held to just two points on 5 offensive rebounds, scoring on just 1. After all the troubles the Seminoles have had, that seems like it would be a positive result. The Canes only missed 22 of their first field goal attempts and 3 live ball free throw misses over the course of 78 possessions against a typically strong FSU defense that still produced 15 turnovers.

This was one of the poorer shooting days for the team from distance, shooting under 25% on the day. I certainly think it was in part simply variance, but you can argue there are cracks starting to show in the efficiency numbers as some of these players are struggling with sustained high usage or forcing shots because they feel they have to. Some have certainly remarked on some of these flaws potentially driving the season into disarray and I certainly see it as a legitimate possibility, but I also believe getting Koumadje back is a really nice bonus.

Once he gets his conditioning and timing back, he'll be a defensive eraser with exceptional reach. I would not be surprised or overly panicked if we drop another game or two here during this adjustment period though as everyone tries to get reacquainted. Though I'm curious to see if Koumadje and Cofer will actually play well together.

Note: These numbers do not 100% validate due to some scorekeeping oddities that occured but they're as close as I could get them.