The 2020 NFL Draft is behind us now, but I thought it would be interesting to look at where these players were rated coming out of high school.

The age-old debate of "Do stars really matter?" has no bigger stage to be judged on than the 3-day NFL Draft. Using the various recruiting functions that have been generously created by cfbscrapR (@cfbscrapR), I now present to you the composite recruit ratings of the NFL draftees coming out of high school: 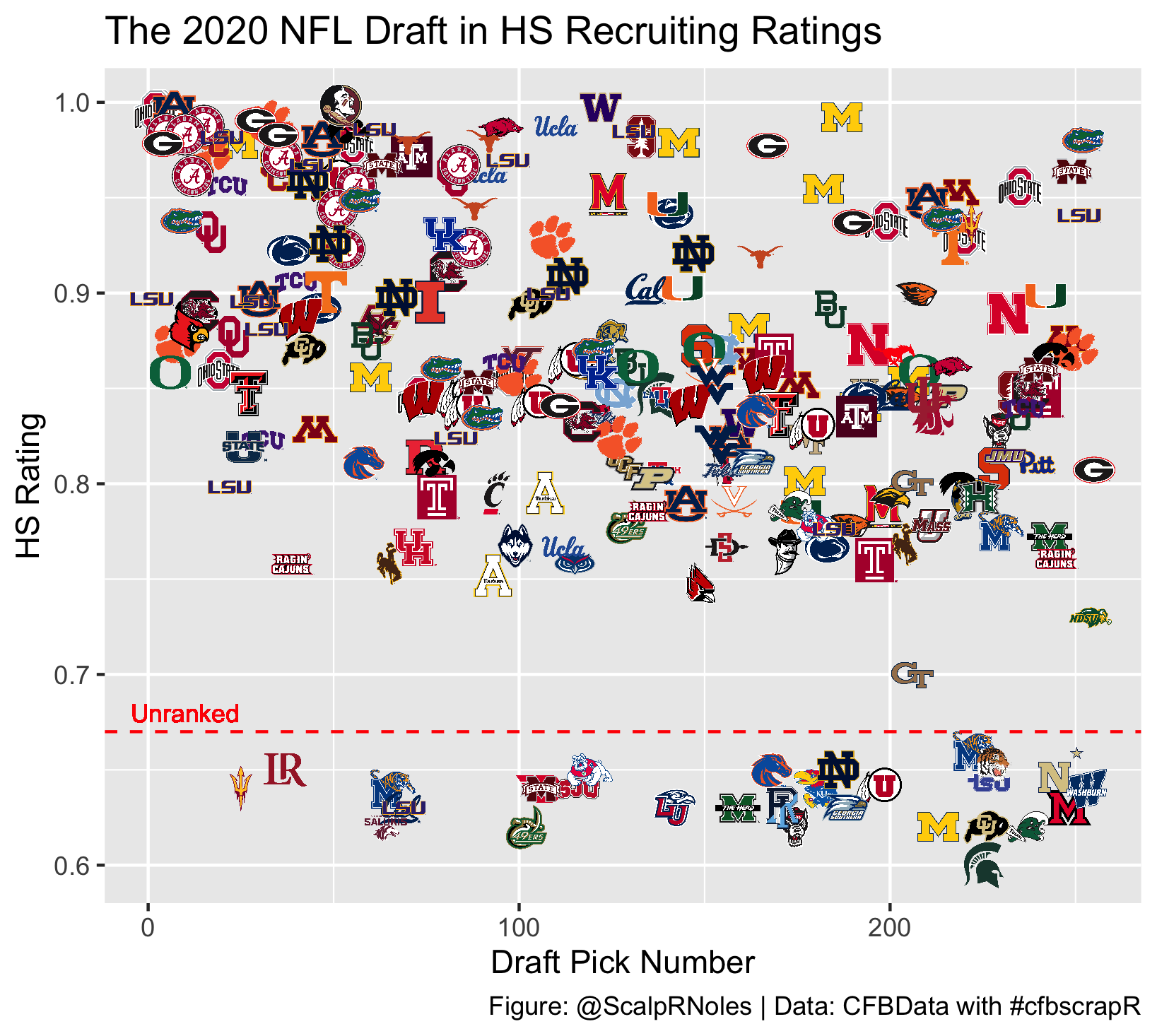 *Note: Players who were unranked out of high school were given various values on the Y axis below the red dotted line in order for each logo to be seen easier*

There is a lot to unpack here.

First off, the average recruit rating for the 2020 draft class was a 0.87, or roughly a high 3-star. The highest rated recruit in the draft is someone FSU fans will recall fondly: Florida State's own Cam Akers.

There were 79 players taken rated 0.90 and above, and on the other end of the spectrum we saw 28 players who were unranked out of high school get their name called. This shows colleges from all conferences and divisions, but if we look closer at where some of the unranked players went to school, we can spot two Memphis players who worked their way up from unranked to the NFL.

Those two Memphis players are Antonio Gibson (Pick 66 to the Washington Redskins) and Chase Claybrooks (Pick 223 to the Jacksonville Jaguars.) Those two joined Dustin Woodward (Pick 230 to the New England Patriots) as the 3 Memphis players drafted this year. This shows us that Mike Norvell has experience finding some of those diamonds in the rough and shining them into professional football players.

So we've seen the draft in its entirety. What about just round 1? Can we see anything from the elite prospects?

Instead of zooming and squinting, lets isolate the first round and see what we find: 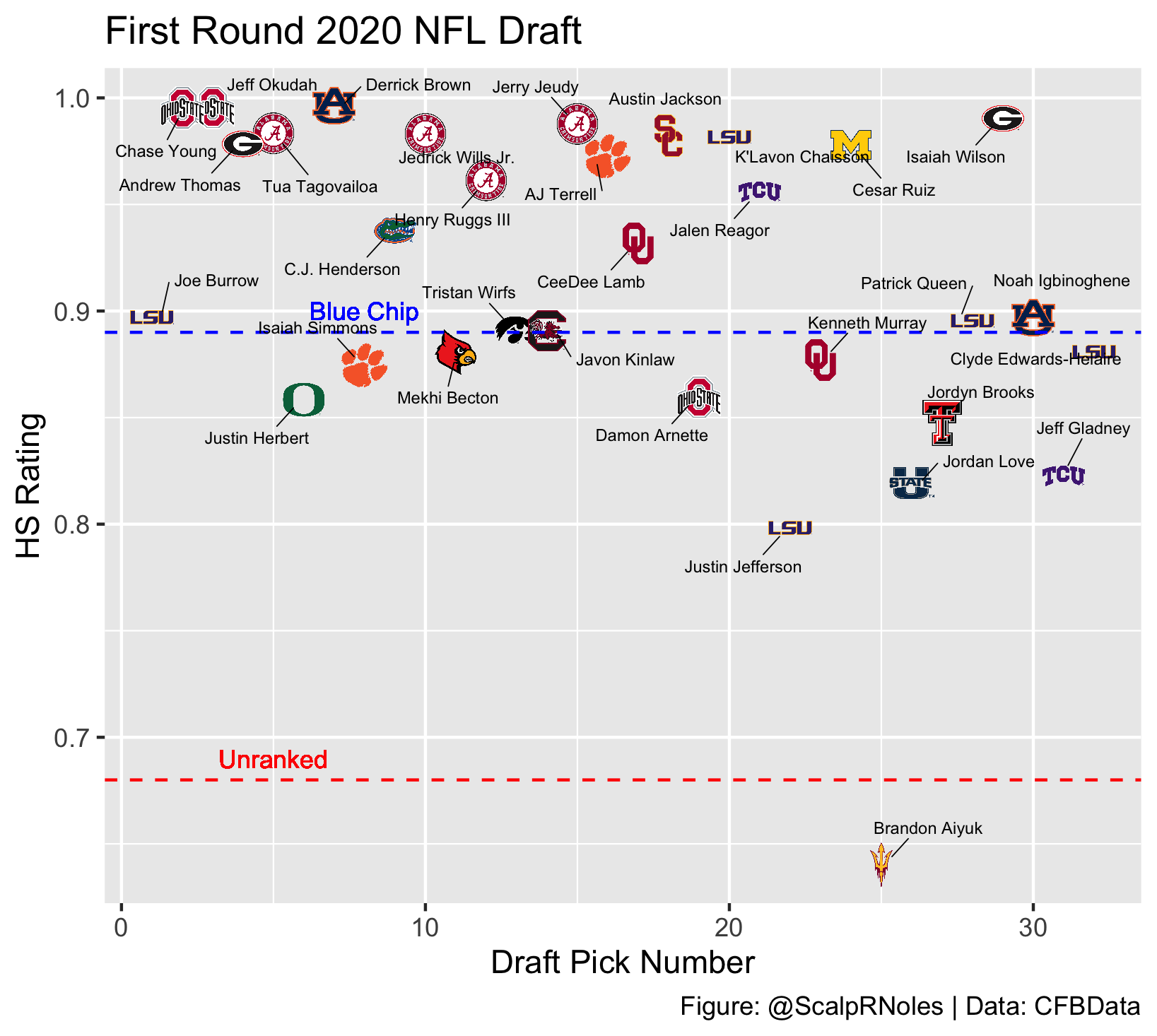 We only have 32 data points here, so I added the names next to logos to aid us in our analysis. The first name that sticks out is Brandon Aiyuk, a wide receiver out of Arizona State. Aiyuk went from an unranked prospect, through the JUCO ranks until finding his way to ASU.

Another notable prospect is the newly minted Miami Dolphin, Noah Igbinoghene. Hailing from Auburn, Igbinoghene was coached by current FSU DBs coach, Marcus Woodson. With the Seminoles DB room currently stocked with blue chippers, I am eager to see what coach Woodson can do with this talented group.

The next observation that comes to mind can be summed up in 3 words: "Blue Chips galore." Of the 32 selections in the first round, 21 players were 4- or 5-star recruits coming out of high school. Of those 21 players, 14 of them were rated higher than a 0.95 composite rating.

Considering the smaller number of 4/5-star players compared to all other ratings, this is a very high proportion of blue chip players taken if the rankings did not matter. The data certainly suggests that higher recruiting rankings are more strongly correlated with being an NFL draft pick than lower rankings, especially when considering the population size of each of the star groups.

So, what are our takeaways from these graphs?

The first is recruiting ratings are a good indicator not only of first round prospects, but of the entire draft. This of course does not completely doom lesser rated prospects, as players like Brandon Aiyuk can break out and rise to great heights. Where you play your college ball, how you develop physically, and how you are coached are all variables in the journey towards the NFL Draft.

The next takeaway that Noles fans can be pleased about is the new staff's ability to produce NFL caliber players. As disappointing as it was to only hear Cam Akers's named called this weekend, it was encouraging to see several players with ties to the current coaching staff have their names called. If the staff can recruit at a high level, NFL commissioner Roger Goodell will have to get used to saying "Florida State" for the foreseeable future.