If you missed the last article where we created Offensive and Defensive Rush/Pass Expected Points Added per Play charts for FSU and their 2020 opponents, you can check it out here.

We will be using these ideas as a tool for valuation of plays with the goal of contextualizing team and player performance relative to the average, given the situational factors at the start of the play.

This model generates probabilities for the possible types of next scoring events within the same half. The 7 scoring possibilities are:

For each play, the multinomial logistic regression model calculates what the probability (p) of each of those scoring outcomes is and the expected points can be calculated by multiplying each of the scoring event probabilities by their associated point values and summing the products, like so: 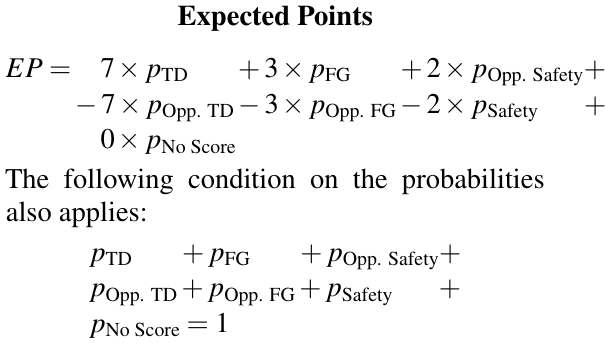 The model is fit using the following variables and interactions:

Down Factors and Down Interactions (54 variables)

You might be asking at this point, “how are there 96 variables, if there are only 10 bullet points here?” (skip to the next section if you didn’t ask.) The answer is a little technical if answered completely, but to model this appropriately, one next score type is used as the reference target (we chose “No Score” as our reference) and the coefficients are fitted to the predictive variables for each of the remaining 6 target score types. This is why you see each factor comprising at least 6 variables.

The additional complexity is that down must be treated as a categorical factor, meaning 1st down is treated as the reference and there are then 6 variables for 2nd down, 6 variables for 3rd down, and 6 variables for 4th down. The same logic would then also apply to each of the down interactions. The Boolean indicators for goal-to-go and under two-minutes are also factors that give relative coefficients to the ‘False’ case, but since there only two cases, only 6 additional variables are created for each.

*Full disclosure: it would be 7 as the denominator if 6 scoreless drives was the largest distance between scoring drives for the entire season across all games (it could be 12 for the games across the entire season, in which case the values would have been 1/12, 2/12, ..., 7/12.)

Field goals and kickoffs are treated separately. The probability that a field goal is made is calculated using a general additive model using the (smoothed) distance of the kick as the predictor, calculated as the yard-line plus an additional 17 yards. Each field goal attempt’s expected points are weighted by the probability it is made (resulting in 3 expected points) and adjusted by the probability of a missed field goal (i.e. Pr(Missed FG) = 1 - Pr(Made FG)) and the resulting change in EPA due to changes in field position, down, etc. that would occur from the missed field goal.

Touch-backs are considered the standard expected outcome for kickoffs and anything returned past the 25 would be a points added situation and vice versa for those not returned to at least the 25. considered

PATs are not currently being treated separately, the extra point is treated as a given, which is less than ideal.

Punts are not treated separately, since their primary effect lies mostly in the change in field position. It is a situation the expected points model is well suited to predict on.

The model was trained on non-overtime data from 2014-2019 using leave-one-season-out cross-validation. This means the model holds one season for test data validation and uses the remaining seasons as the training set, then uses the trained model to make predictions on the season held out. This process is then iterated for each season in the data. 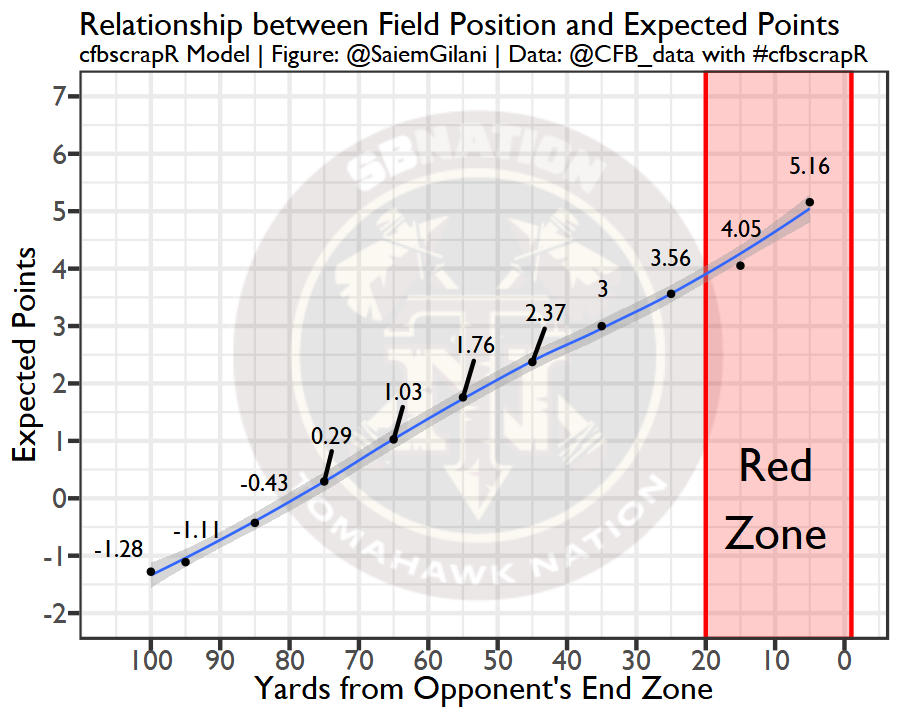 It should be no surprise that as offenses move closer to their opponent’s goal line, the expected points trend upward for the offense. Notice for the point representing the 30-39-yard line grouping, the expected points is right around the value of a field goal. This aligns with one of the common definitions of a scoring opportunity, giving support to the appropriateness of the definition.

Field Position and Expected Points by Down

Recall that down and down interactions were three of the predictors in the model, so here is the field position view of expected points separated by down. The plot below demonstrates that your expected points are higher (on average) on 1st down than 2nd, and 2nd down than 3rd, etc at every point on the field, except possibly near the offense’s own goal line where there is risk of giving up a safety. 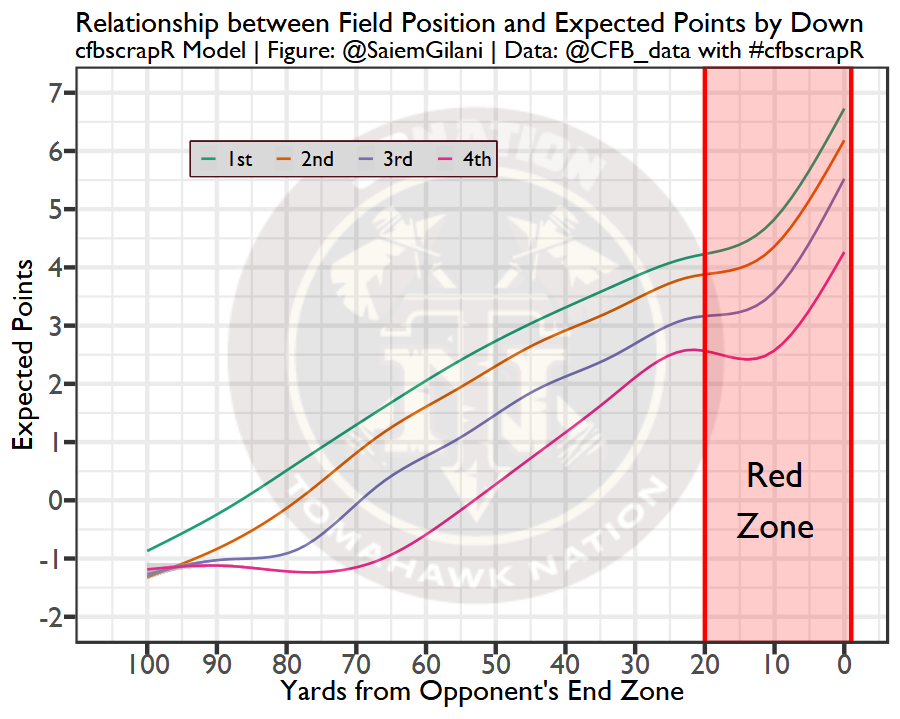 This graph should be somewhat intuitive, but to understand what the relative expected points difference for each down at the same field position, we are interested in the vertical distance between each of the lines.

Noting that, we see that difference between 1st and 2nd down is steady across most of the field from left to right, starting wider near the offense’s own goal line and narrowing as the offense progresses toward the opponent’s end-zone.

Further yet is the 4th down line, which has an interesting track, narrowing closest to the other down lines around the 25 yard line.

Perhaps we should examine the next score probabilities underlying each of these down lines to see what drives these relative differences. More on that in Part 2, coming your way next.